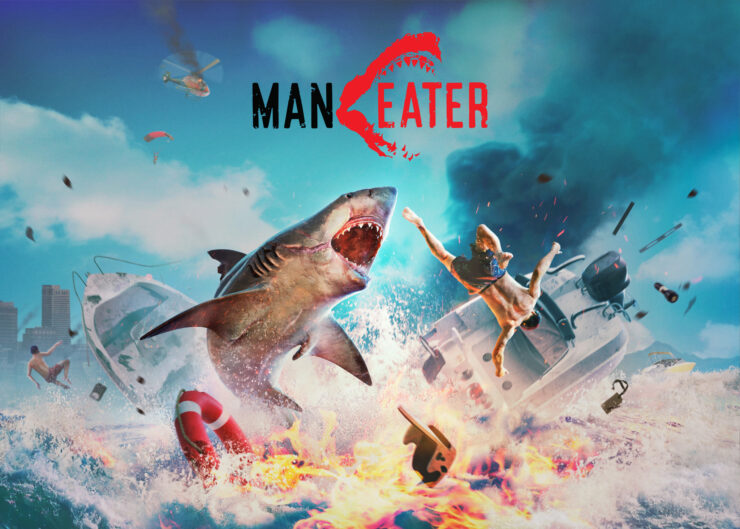 After sinking our teeth into a sizable chunk of Maneater's early game, we had the pleasure of sitting down with Tripwire Interactive's CEO, John Gibson, to get more insight on the first SharkPG and what's to come in the future. We started by getting a quick rundown on Tripwire's pitch for Maneater.

Maneater is an open world action RPG where you play as a shark. There's a lot more there than it would seem like on the surface. There's a lot of depth and diversity to the experience. I think people will come for the shark because they'll be hooked and they'll stay for the game they find when they get there. The game is out on May 22nd for PC (Epic Games store), PlayStation 4 and Xbox One, with a Nintendo Switch port coming later.

Even in the tiny gameplay demo we got to check out today, I'm already starting to see some of the hooks of Metroid progression. We've seen gates where you have to be a certain age phase of your shark in order to progress. What other elements are we going to see for the exploration side of Maneater?

So a big part of the exploration, as you saw in the video that we showed, there may be places that you can [tail]whip another fish up and strike something to open gates. There are numerous caves and things hidden throughout the world that can either help your shark grow quicker in nutrient caches, or you'll find special evolutions that give your shark abilities beyond what nature intended. Also, the exploration, aside from being many different types of environments from open oceans to bayous to polluted industrial areas, it also allows you to tailor the challenge of the game to what you want. Because [Maneater]'s an open world game, if you want to swim out into the ocean and tackle some of the nasty things that are out there pretty much right out of the gate, you can. But, if you want to be a more chill explorer, you can go out and eat wildlife without big teeth and grow your shark and get very powerful then come back and tackle some of those challenges.

We've seen some of the endgame evolutions in Maneater and players are going to have traits such as bone armor and bioweapons. What's your inspiration for the final evolutions for the shark?

A lot of it is watching our team members and how they play [Maneater]. Some of the players that play the game "get in there and smash things" and that's kind of the inspiration for the bone armor: give them what they could already do and the way they want to play then take it somewhere really extreme. Some players like to go through the world and get a whole bunch of enemies chasing them and just get surrounded by combat and wildlife. With the bioelectric path, it's really about being able to handle lots of enemies at once in such large groups. Then, there's the more stealthy player who wants to use their speed and stealth to pick things off. The shadow path is almost like a vampire: use your speed and your ability to suck more health out of enemies and even a special ability that puts everything around you in slow motion so that you can pick things off. It was about how we look at how people were playing [Maneater] and give them better tools to enjoy the game.

Once you go down one of these paths of evolution, are you locked into it or can you change a build later on?

As you just played, you went to a grotto and could evolve the shark. Basically, in any of these grottoes in the game, you can go and re-evolve your shark in a different direction. You can't be swimming through the world with bone armor and jump out of the air and come down and suddenly you're electrical. But, you can re-evolve your shark in different directions and even mix and match. You can take a little bit of bone armor, a little bit of electric, and a little bit of the shadow route and come up with something that we didn't even think of. If you want to be the most powerful damaging shark, you go full bone armor. If you want to have the most crowd control, you go with the bioluminescence, but we really want to give players that volition to tailor to their own playstyle.

Is there any sort of permadeath mechanic, like if you die as one shark, do you have to start from a pup again, or are you just respawning back at a grotto and continuing your adventure?

There isn't a permadeath mechanic. We did experiment around with permadeath in the beginning, and maybe in the future that could come back as a mode, but because [Maneater is] such a long game, permadeath was a little too frustrating for players. If you die, you'll potentially lose your position in the world. If you've gone out exploring, you'll respawn at the last grotto that you visited. You'll lose some progression but you're not completely penalized for dying.

Do you mind talking about some of the technical stuff?

Sure, my background is software engineering, so it's okay to get a little technical.

Sony and Microsoft are starting to talk about the next generation of consoles. We already know that they're going to be powered by SSD's and will most likely be on a modified Ryzen core chipset. What's your opinion on the consoles? Some gamers are saying that they're more of the same; some are saying that next gen's a major leap forward. Where do you fall on that spectrum?

Without giving away anything I'm under NDA with, I think they're a major generational leap.

Some of the things that people are talking about like SSDs, well, people tend to think about faster GPUs and faster CPUs, but 5200 RPM hard drives are terrible with long load times. We have an open world game like Maneater and it means we can only have the shark move so fast because other things can't stream in in time. It really opens up what you can do with the game. The other things like the faster GPU and CPU, those things are great too, [and] more RAM. All of those things are a pretty big generational leap. I'm really excited about what we'll be able to do with our current and our upcoming games on new hardware.

Do you think we might see Maneater pop its way onto next-gen consoles?

I can't officially confirm anything but it's always our goal to bring our games to as many places as possible to get the games in the hands of as many gamers as possible.

Great. Speaking of current-gen, is Maneater going to have any enhancements on the PlayStation 4 Pro or Xbox One X versions?

The short answer is: yes. We're still working on some of those things, so we haven't finalized what that list will be.

One of the things, if you guys are more interested in tech, that we've done with Maneater is we're using Unreal Engine 4 but we wrote our own custom render which allows for, what we're calling it, forward rendering plus. It allows [Maneater] to run really well on consoles and also perform on the Switch. With deferred rendering, it's much heavier [on available resources?]. Developers went away from forward rendering in the early to mid-2000s because, with deferred rendering, you could do a lot more lights and a lot more shadowing. But, as we've seen the power of machines get better, there were a lot of advantages to forward rendering that we lost when we went to differed. We found a lot of benefits and it was interesting because we developed the forward renderer and initially [decided] we were just going to use this on the Switch but wow, this performs really well on the Xbox and on the PlayStation. And so, we asked the graphics programmer if he could maybe get an effect back in and he'd do it and then we'd ask to get this [effect] back in and by the time we were done, we had all of the effects that we wanted and better performance. That was pretty exciting.

Nice to know. Thank you very much for your time!