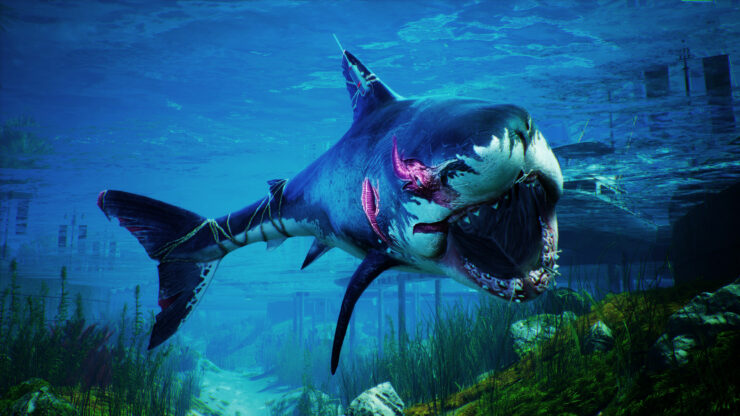 Sure, San Francisco *does* have a beach just minutes away from the beautiful downtown scenery but one would hardly say it's ideal for shark viewing. That's why the folks at Tripwire Interactive flew all the way out from Georgia to give myself and a small number of other press folks the first taste of Maneater across Xbox One, PlayStation 4, and PC (Epic Games store). Despite my instincts to always pick up a PlayStation controller, I opted for the PC experience after sitting down with Chivalry II for the better part of a couple of hours prior. 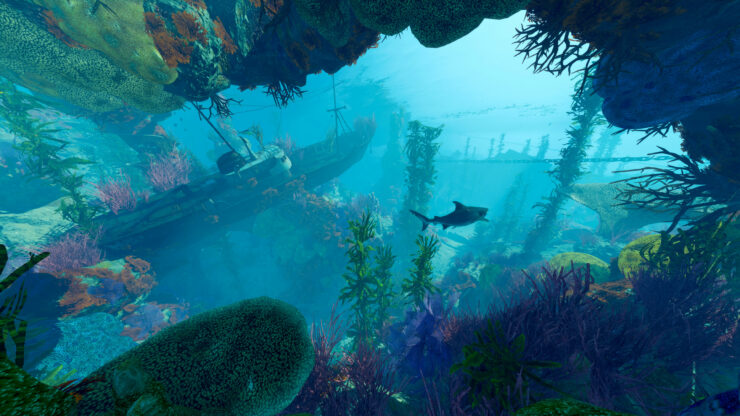 Maneater opens with the promise of what you could easily evolve into: an apex predator of the Florida waterscape and the usual tutorials that teach the player how to catch a fish and then mercilessly tear it to pieces and consume it in a bloody mess, as bull sharks might be known to do. It isn't long after getting your water wings and terrorizing just about every manner of creature you can sink your jaws into that the player is captured out of the water and slain as a fresh catch at the hands of one Scaly Pete. The shark's offspring escapes her captor's clutches, not before taking a sizeable chomp and taking Pete's hand clean off, and control is given back to the player in the form of the shark's sole offspring.

Those moves that the player learned as a fully grown female bull shark are quickly lost as players assume the role of a pup shark and have to work their way back up the food chain. In Maneater, nearly everything with a heartbeat can be eaten and consumed to help your bull shark grow. Nutrients gained from eating live fish (and eventually humans) or found in submerged caches can be then spent as a sort of currency at grottos scattered throughout the seascape to evolve your shark and unlock new abilities. From what little bit I played of Maneater, you're more than what you eat and these new abilities will unlock new mechanics and areas of the open world ala Samus' Chozo-gifted powers in Metroid (or permissions if you somehow find yourself unlucky enough to want to play through Other M). 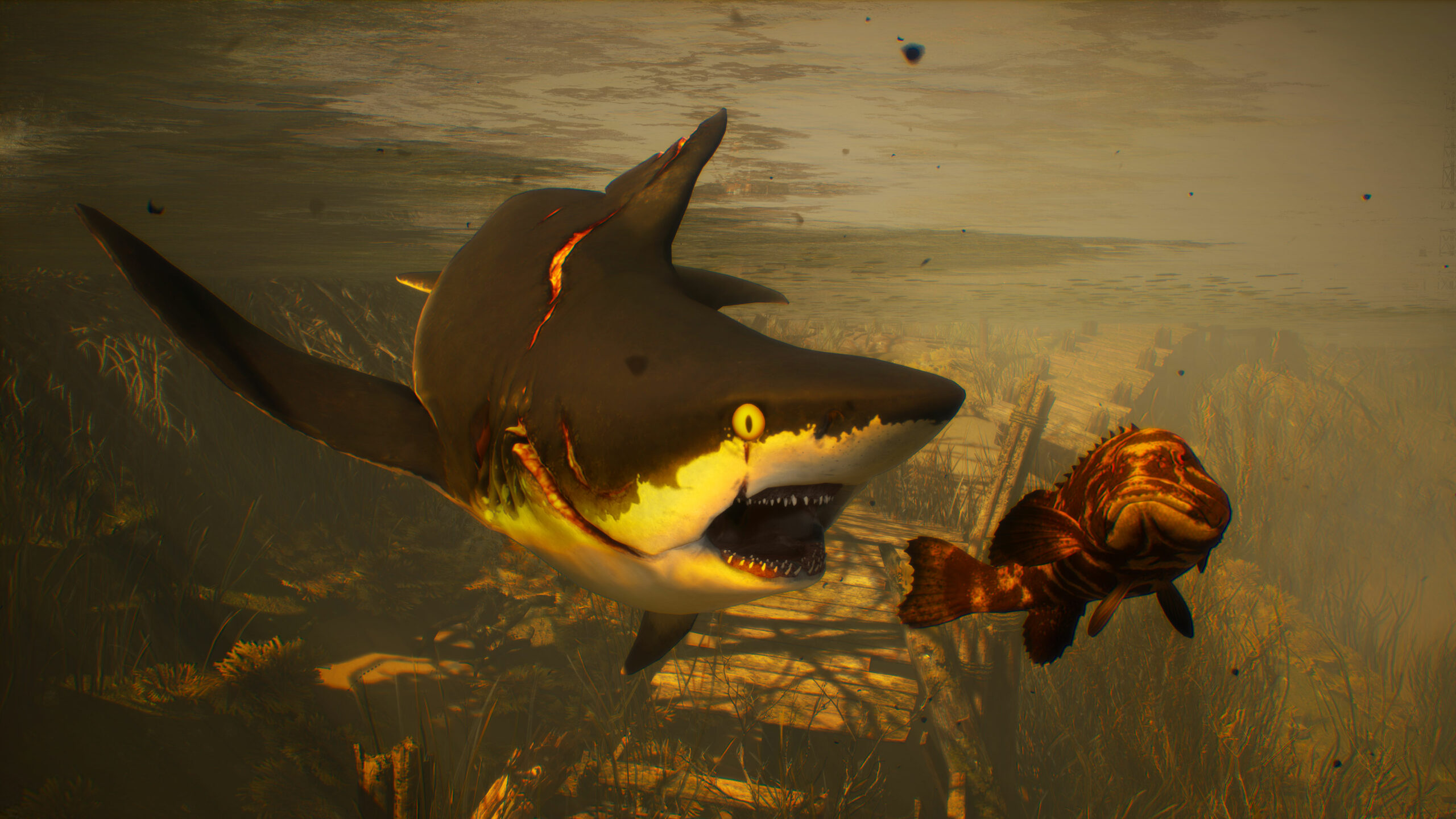 Early on, Maneater appears to follow a pretty standard open-world formula, only swapping the ability to walk and drive for three-dimensional freedom in the water. Hidden caches provide an always important source of currency, in this case nutrients for the shark's evolution, while side quests and collectibles litter the water where ever you may roam. Just Cause's mayhem system also plays an influence in Maneater: cause enough of a commotion in a given region by attacking bounty hunter boats and unique bounty hunters will make their way into your locale to try and claim you for a trophy. Defeating and consuming these named enemies will boost your notoriety as an apex predator and unlock unique evolutionary traits. The first of which was against an ex-alligator hunter by the name of Bayou Willy whom, once he makes for a nice afternoon snack, rewards the player with bio-electric teeth that add electrical damage to the shark's bite. No one ever said these evolutions had to be realistic.

Speaking of realism, Maneater's entire presentation takes place within the confines of a faux reality show known as Maneater. Starring the same Scaly Pete that murdered the player shark's mother in cold blood, this reality show premise permeates through Maneater's entire presentation. New hunts and points of interest are narrated by an invisible narrator in the same faux-excitement of an Animal Planet host that just learned he's getting bumped from primetime to a 10 PM timeslot. There's a definite cheesiness to the narration but it helps to build the world of Maneater as this reality show experience (even going so far as to call the story chapters Episodes).

Playing as a bull shark takes some getting used to controlling as there's another dimension to contend with versus just playing as a regular bipedal human on land. Having to swim up and down takes a little bit of getting used to but does come naturally over time. However, what isn't quite so natural is trying to control the camera at the same time when you're tracking your prey. I'd routinely run into issues of trying to swing the camera around and it catching on a piece of flotsam or algae. In the current build of Maneater, there isn't a proper lock-on system to track your prey (the developers mentioned trying this in previous builds but it made the experience too easy) but it remains a feature that I found to be lacking in my experience.

Lastly, here are some quick bull shark facts that I learned after spending some time with the first SharkPG. Bull sharks have the strongest bite of any measured shark and can eat turtlets as well as other bull sharks and probably have no problem ripping open a canoe like a can of salted mackerel. They also thrive in not only salt but also fresh water and have a unique mechanism to regulate how much salt they can pee out to survive in either environment. Lastly, despite some people claiming otherwise on the internet nearly a decade ago, no, bull sharks do not have the most testosterone of any animal on the planet.

Maneater might seem a little fishy early on in the previews I saw, but they have a good framework in place for producing the world's first SharkPG. With a little bit more time polishing up the camera work and controls, this could be a nice mid-length RPG to sink my teeth into.

To find out even more, check out our interview with Tripwire Interactive CEO John Gibson.