The upcoming Galaxy S6 Edge Plus has started to see an increasing amount of information surface regarding its specifications over the past couple of days, even more than the successor to Samsung's highly popular Note series, the Galaxy Note 5. Both the devices are expected to be launched by the Korean manufacturer in less than two days and today's information confirms what we've been telling you about the Galaxy S6 Edge's larger sibling so far. 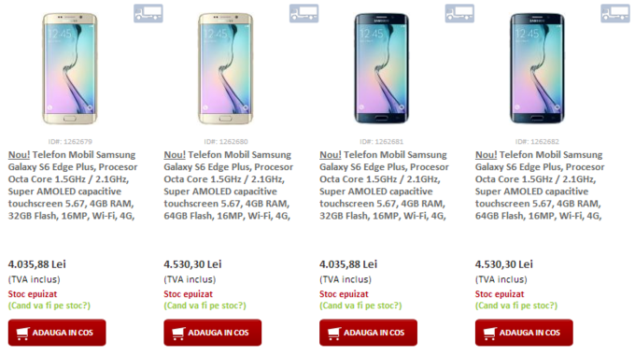 With the launch of the Galaxy S6 duo earlier this year, Samsung seemed to be a company reborn. The all metal devices were a breath of fresh air from the company's earlier Galaxy flagship smartphones, which were oft criticized for not focusing much on the design end, but rather equip themselves with top tier specifications. Well, the Korean electronics giant proved everyone wrong, and the Galaxy duo was heralded as some of Samsung's best designed devices to date.

But given the pace at which things move forward in the smartphone industry, that was yesterday's news and now we're set and focused for the Galaxy S6 Edge Plus and the Galaxy Note 5's launch in New York on the 13th of this month. Samsung's larger screened S6 Edge has been posted by a Romanian retailer today. As can be seen in the image above, the Galaxy S6 Edge Plus will be coming with the 14nm Exynos 7420 and 4 GB of RAM. Its also listed with two storage variations as of now, which are 32 and 64 GB respectively.

As far as the retail price of the device goes, the Romanian retailer listed the 32 GB Galaxy S6 Duo with a price tag of 4035 Leu, which converts into $1099. The 64 GB variant on the other hand comes with a tag of $1133, but keep in mind these are not the carrier price versions, which should of course be different. Like what you see for the Galaxy S6 Edge Plus? The device won't be changing much from the Galaxy S6 Edge except for screen size, so we're not impressed. Stay tuned and let us know what you think in the comments section below.