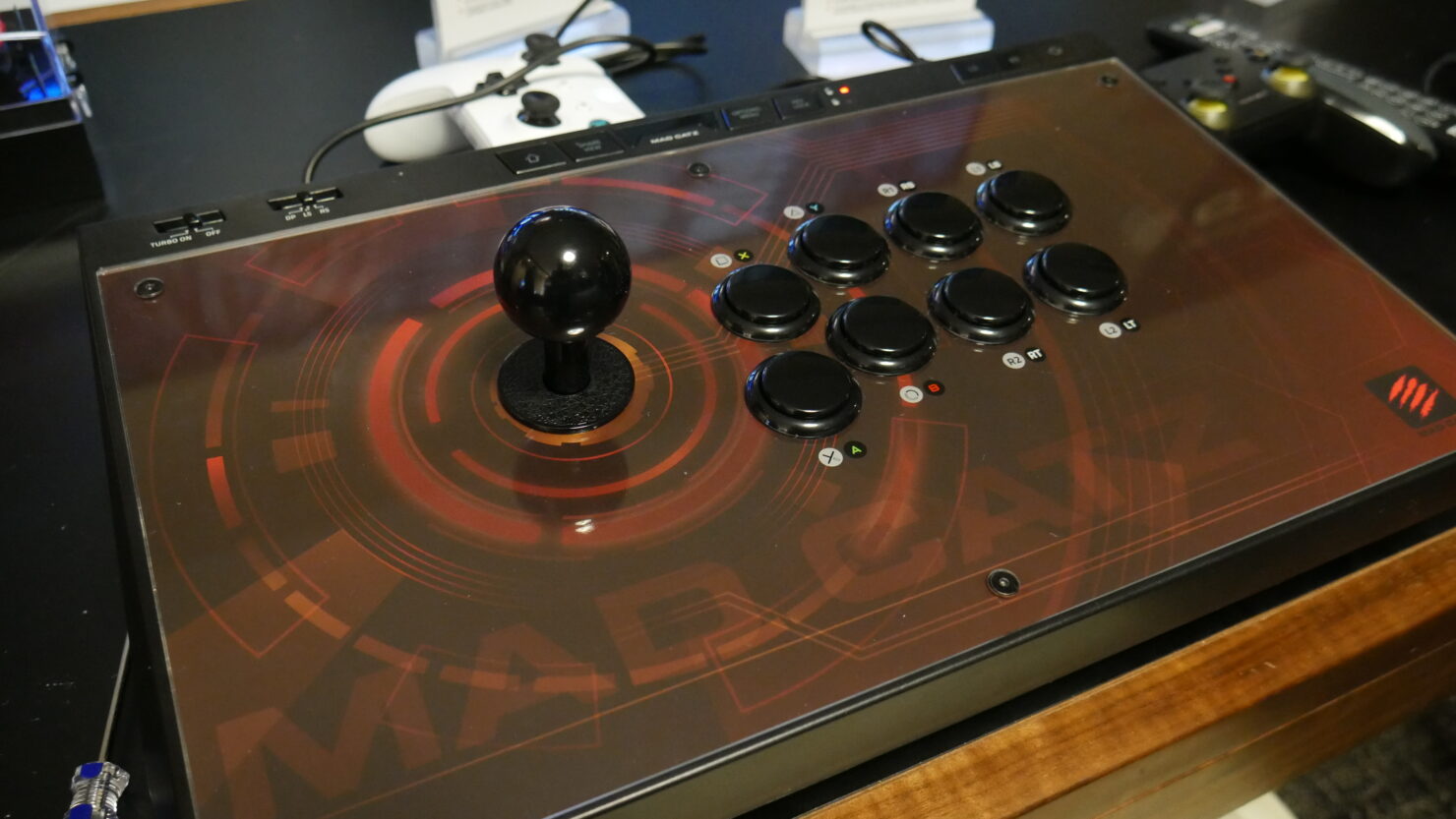 One of the newest product reveals that I'm personally most excited from at CES 2020 wasn't on the showfloor itself, but I checked it out by visiting MadCatz' offsite suite. Sitting within the same lineup as MadCatz' updated R.A.T. mice and other PC accessories was a familiar looking eight-button Arcade Stick set up to demo Dead or Alive 6 on the Xbox One. After a few years away from the tournament scene, it was good to see MadCatz return to the FGC with the announcement of their new EGO Arcade Stick.

The MadCatz EGO Arcade Stick should look immediately familiar to anyone familiar with the last decade of MadCatz arcade sticks, starting from the Tournament Edition that released alongside Street Fighter IV back in 2009. From the simple rectangular design to the eight-button Vewlix-style layout, the MadCatz EGO Arcade Stick returns to the aesthetic that MadCatz has been known for. While the exact buttons used weren't listed, the components felt very similar to the Sanwa JLF-TP-8YT Joystick and Sanwa OBSF 30mm push buttons, parts that still power some of the most common arcade sticks in tournament play to this date.

Along the top button array for the extra controls on the MadCatz EGO FightStick are the usual assortment of buttons that you'd see on any PlayStation 4 or Xbox One controller with the usual extras saved exclusively for arcade sticks. From left to right across the control array, players have: a turbo toggle, toggle switch to migrate joystick control from d-pad to left or right sticks, home button, share/view button, options/menu button, key lock (for tournament play), and lastly the L3/R3 buttons. The final button on the EGO Arcade Stick is used to swap the Arcade Stick over from one console to the other. In addition to a cable storage bay on the back of the EGO Arcade Stick, MadCatz also includes room for a hexagonal screwdriver (included with the Arcade Stick) to remove the top panel as well as spacers for two replacement OBSF 30mm push buttons if you need to make any adjustments while on the go.

What separates the EGO Arcade Stick from others on the market is in its unique operation from one console to the next. MadCatz informed me that the EGO Arcade Stick, while labeled with PS4/Xbox One button labels, doesn't feature any control boards for either console. Instead, there is a USB Type-A port that acts as a bypass bridge to a PlayStation 4 or Xbox One controller. According to MadCatz, the reason is to avoid the licensing issues with Sony and (Microsoft) because of concerns that Sony is going to release the PlayStation 5/Xbox Series X soon. MadCatz wants the next generation of EGO Arcade Stick to have both features built-in without any need of the controller bridge. In the current iteration, by having a second controller hooked up into the EGO Arcade Stick as a bridge, the possibility of seeing this same stick work on both the PlayStation 5 and Xbox Series X is something that we look forward to testing later this year.

The MadCatz EGO Arcade Stick for PlayStation 4 and Xbox One is currently targeting an April 2020 release with a current price point of $179.99, subject to change.