When the first batch of selfie sticks landed on our dear planet, we thought for a second that it might actually be a good idea for 'personal' photography. But quite frankly, we made a thoughtful u-turn when we realized that people are abusing selfie sticks more than using them. And to prove a point how ridiculous the entire idea of the selfie stick is, someone out there took the liberty and went the extra mile - or lightyear - and has managed to conjure up a MacBook selfie stick. 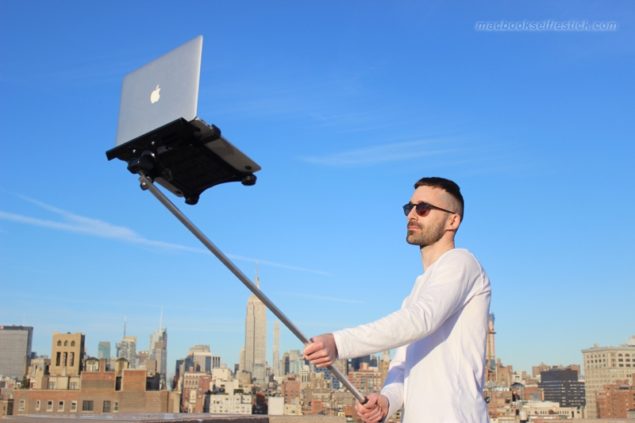 The MacBook Selfie Stick Invokes An Odd Cringe Inside Us

The contraption is exactly what you think it is - a selfie stick that is capable of cradling your MacBook so you can take a selfie. Crazy idea? We agree. But there's good news as well - the whole thing is just an 'art' project, aiming to give a glimpse to the world how stupid things can get when ideas are let go from a leash.

Take a look at the photo gallery below and prepare yourself for some cringeworthy experience.

From the photos you can clearly see how passers-by are persuaded by will to actually stop and give the user of the MacBook selfie stick an eyebrow raised look. And quite honestly, I would be stoked too smithereens as well if I saw someone in front of me pulling off such a feat.

While it's possible to build a MacBook selfie stick, but it should also be kept in mind that the MacBook is fairly heavy notebook. After all, we're dealing with aluminum here, and holding the notebook up in the air using the selfie stick requires you to be using two hands, instead of one, unlike a smartphone selfie stick.

Although it's a work of art with a purpose, but we're quite certain that somewhere on planet will actually turn this into a shipping product. How do we know? Because that's how such things work. And once the hype gets going, there'll be no stopping this trend until or unless someone points out its ridiculousness in the most elaborate manner possible.