While the first two Lost Planet games always fell short when it came to their story it seems that the latest game will have no problem in bringing fans of the series back and maybe even new comers. The game moves away from complete mech based combat and takes us down to the surface where Jim has to come to face with Dead Space-esque environments all the while sporting a more powerful "Rig" which is a mech and definitely beats Isaac's engineering RIG in the original Dead Space, In short the game is shaping up to be a third person shooter survival horror. 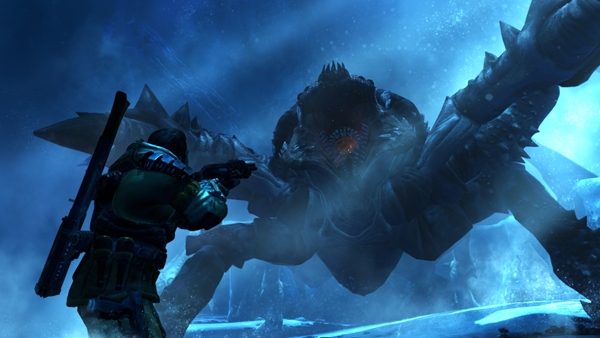 While the first two Lost Planet games fell short of story it seems that Capcom has had a change of heart and is focusing less on mech on mech combat and is instead focusing on making a third person shooter survival horror but WITH Mechs, it sounds out right ridiculous but believe it or not it might just work out for the better.

How many times have you played a TPS SH and wished you had a giant mech to make all those difficult bosses a breeze? While Isaac Clarke, Leon S. Kennedy and Chris Redfield (among many other protagonists) it seems that Jim; the new protagonist for Lost Planet 3 will have the benefit and costs of such a "heavy" responsibility.