Lichdom Battlemage has received a pretty awesome official trailer, and will be releasing on March 22 for Xbox One, and PS4. 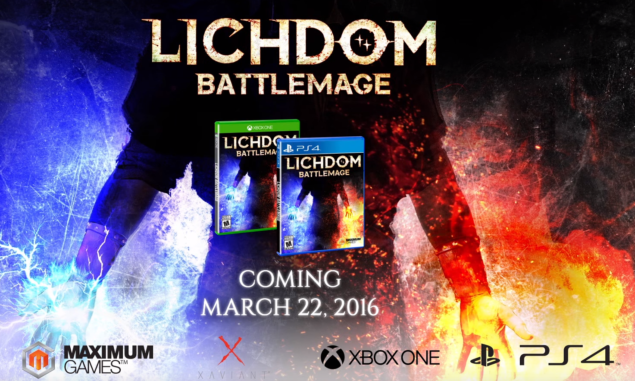 The first-person action RPG from developer Xaviant already released on PC last year, but the game will now also be released for both the PS4 and Xbox One. Publisher Maximum Games has announced that the title will be hitting consoles on March 22, 2016.

To celebrate the release on consoles, the publisher has released an official trailer.

Playing like a first-person shooter,  Lichdom: Battlemage is unique in that there are no guns, no knives, and no swords - just raw magic - making the game the first of its kind to employ magic as the exclusive form of weaponry.

"The game is classic in its storytelling, yet completely unique in its gameplay," said Christina Seelye, CEO of Maximum Games. "Like most magic games, there are definite RPG elements, but the game is pure action - through and through."

Lichdom: Battlemage  centers on the concept of unbridled power and magic with absolutely no mana bars and zero cool downs. When the wicked overlord known as Shax rips your closest loved one from the world, you set out on a journey to hunt him down. Before you embark on your quest for vengeance, a wizard grants you unlimited magical powers and designates you "Dragon," the most powerful battlemage on earth.

Explosive, fast-paced action in the vein of first-person shooters

The console versions of the action RPG were announced back in March of this year, and developer Xaviant was excited to partner up with publisher Maximum Games to bring the game to consoles.