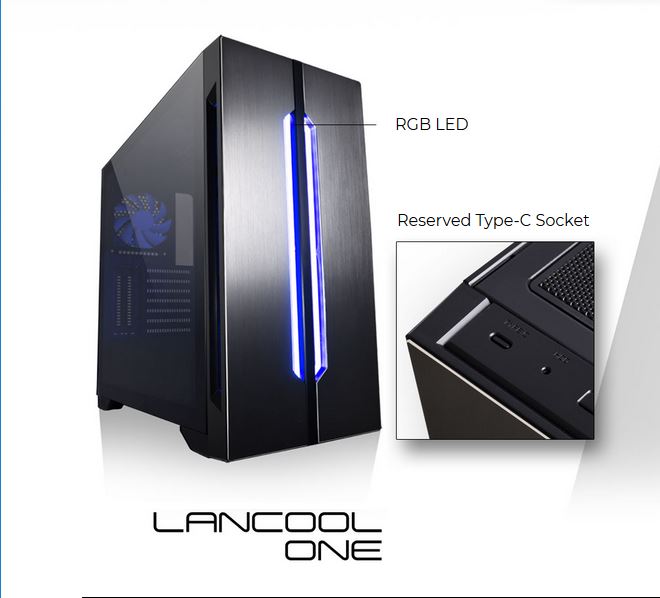 Lian Li, the world's leading manufacturer of aluminum chassis for the hardcore enthusiasts as well as custom OEM/ODM case solutions, is pleased to announce the official launch of the LANCOOL ONE chassis. Featuring Lian Li's signature brushed aluminum finish and quality combined with modern RGB lighting, the LANCOOL ONE brings a new twist to a classic Lian Li design.

With Lian Li being known as the best and most experienced brand in working with Aluminum, the Lancool One has high expectations for it. It packs a very attractive aluminum front panel with RGB LED lighting, which may dismay some but absolutely attract others. It definitely isn't as gaudy as it could be and is pretty refined for a big ol' light strip. The RGB lighting serves as both an accent piece for the front panel as well an ambient lighting for the internal chamber giving it a two-in-one function that provides a lot of value. The LEDs also illuminate front fans directly so users not using RGB fans on the front can get the illusion of using RGB fans on the front thanks to the front panel lighting.

As for the type of support offered by the RGB fans, Lian Li has worked with all leading motherboard brands to provide RGB sync support with most popular lighting control software like ASUS AURA Sync, GIGABYTE RGB Fusion, ASRock Polychrome and MSI Mystic Light.

Both top and front panels of the Lian Li Lancool One offer great airflow. Lian Li has designed the Lancool One to have optimized airflow so users who want to maximize cooling can do so thanks to plenty of fan mounting locations. Integrated removable dust filters allow ease-of-cleaning and reduced dust inside the chassis. The front panel of the Lancool One features an open front slit and side vents maintain looks while still providing high airflow for a great balance of looks and function.

The Lancool One supports up to 360mm radiators on the top or front (only one at a time) or users can also mount a single 280mm radiator on the front. A total of nine 120mm fans can be installed on the Lancool One for incredible airflow possibilities.

Increase cooling in your case or add more storage with the Lian Li's innovative dual-function PSU shroud. The shroud includes removable drive trays to house two additional 2.5" drives like SSDs or mount additional two 120mm fans for improved cooling that helps in cooling PCIe devices like the GPU. Underneath the PSU shroud, the user can install up to two 3.5" drives like HDDs for further storage. The drive cage is removable and you can move it so you can have more space underneath the shroud for other airflow or modifications.

The LANCOOL ONE features a full tempered glass side panel which is locked in place with LIAN LI's signature mounting system, which allows for a seamless look yet still secure and easy to use. This makes it easier to remove your tempered glass panel and do maintenance and cleaning as well as the installation of new components on your system.

Best of all the case is priced at a very acceptable price of $99 currently on Newegg.