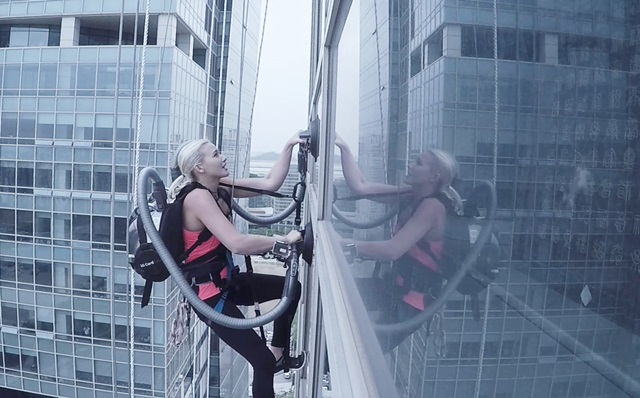 If there’s one thing that tech companies manage to do right, it’s making great marketing campaigns. Involving an LG vacuum cleaner, the company decided to bring in an expert rock climber just to see how the South Korean’s consumer goods hold up against death defying feats like the one you’re about to see.

LG sought out the help of famous rock climber Sierra Blair-Coyle. She was the winner of the 2015 US Extreme Rock Climbing contest, but this feat was more challenging that climbing a rock. Instead, she had to remain stuck on the outside of a glass skyscraper using absolutely nothing but suction created from an LG vacuum cleaner.

These consumer electronic goods that were used to complete the feat was cordless vacuum cleaners that were powered by batteries. Before proceeding to scale the building, we are dead certain the products were completely charged. The last thing you want are the vacuum cleaners to power off before you have nearly reached the top of the building. Suction created by the vacuums not only had to sustain their own weight, but the weight of the climber as well, who was no feather because according to LG, the total weight that was being supported by the suction was a massive 70kg.

In order to provide her with sufficient assistance, the rock climber was wearing two of the vacuums on her back with one providing suction to each of her hands. According to LG, she had to turn the vacuum off to allow the suction cup to lift from the glass surface as she moved up. To keep countermeasures intact, the climber was supported with safety ropes in case the vacuums failed, which would certainly mean her impending death had those safety ropes not been in position.

LG was obviously trying to prove that its vacuum cleaners possess the suction power capable enough to capture dust and grime from those ‘tough to reach places’. Check out the video below to see how the climber was able to scale the top of the 140 building and tell us what you thought of this latest stunt.