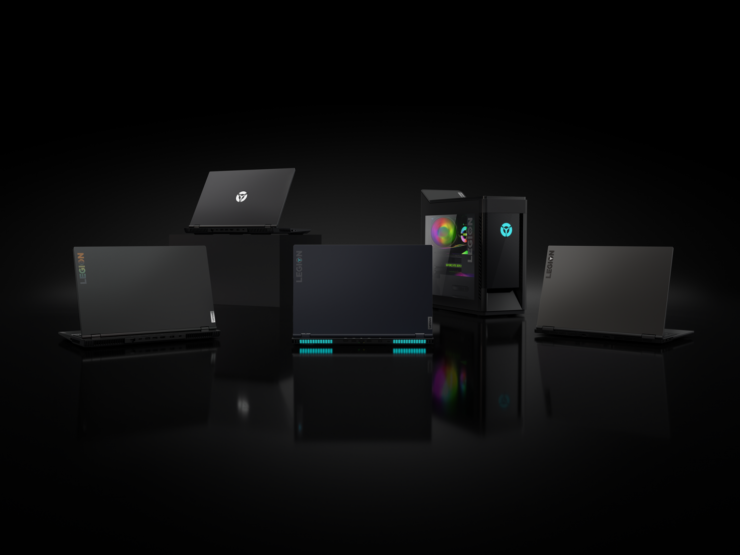 Lenovo Legion is centerstage with up to the latest 10th Gen Intel Core H-Series or AMD Ryzen 4000 Series mobile processors, and up to the recently announced RTX 2080 SUPER GPUs with Max-Q Design. With higher clock speeds and new levels of realism in today’s AAA games, the next-gen Lenovo Legion gaming PC portfolio is even more stylish on the outside and savage on the inside.

Lenovo's Cream Of The Crop Laptop - The Legion 7i

Ideal for avid gamers who prioritize competitive play, there’s no better test of gaming engineering than on the new, premium Lenovo Legion 7i. Precision-crafted to showcase breathtaking visuals on its 15-inch Full HD display (1920 x 1080) with 100 percent Adobe sRGB color accuracy, this laptop has VESA DisplayHDR 400 for a higher level of precise detail.

Featuring an all-metal exterior and available in a sleek Slate Grey hue, this portable laptop at just 2.1 kg (4.62 lbs) packs a serious punch with supercharged power, thanks to its up to 10th Gen Intel Core i9 H-Series overclocked mobile processors. Multitasking, streaming, and content creation is made even easier with ample storage of up to 1TB PCIe SSD8 and up to 32GB DDR4 memory.

Offered with up to 240Hz smooth refresh rates enabling response times under 1ms via OverDrive and NVIDIA G-SYNC technology, you’ll keep up with all the action of graphically-intensive AAA titles. Get up to NVIDIA GeForce RTX 2080 SUPER GPU with Max-Q Design for ray tracing in-game, engineered to improve lighting and reflection effects for an incredible level of realism. Then dive into the rich contrasting colors from Dolby Vision on an ultra-vivid display while Dolby Atmos Speaker System sound creates an immersive experience.

A High-Performance Laptop With A Reasonable Price - The Legion 5i

For a mainstream gaming laptop that doesn’t skimp on performance options, the Lenovo Legion 5Pi is built with gaming dominance in mind. At up to 500 nits brightness, the 15-inch Full HD IPS display has an optional 240Hz refresh rate and the amazing clarity that comes with optional VESA DisplayHDR 400 and Dolby Vision. This beast of a laptop with up to 10th Gen Intel Core i7 H-Series mobile processor and optional NVIDIA GeForce RTX 2060 GPU has Lenovo Legion TrueStrike keyboard for 100 percent anti-ghosting, as well as dedicated media keys and a number pad to make video editing and setting macros even easier.

Lenovo Legion Tower 5i is the high-performance gaming tower that’s well-suited for the avid gamer who wants a high-performance home battle station. Push system performance to the highest settings, while staying quieter and cooler during cinematic gaming experiences with the tower’s optional liquid-cooling system.

It’s optimally built for overclocked system performance ideal for those heated marathon sessions. Get up to NVIDIA GeForce RTX 2080 SUPER GPU for ultrafast frame rates with over 4K resolution15 at an accessible price point. With cool blue LED lighting, optional RGB internal lighting and its chassis in a Phantom Black hue, gamers can choose to showcase their personality and high-power internals with transparent side panels.

Entry-level players who want to level up without breaking the bank can rely on Lenovo for a selection of reliable gaming devices to give them a competitive edge, such as the new IdeaPad Gaming 3i laptop and the IdeaCentre Gaming 5i, the new home battle station with flare and horsepower. Designed to eliminate screen stuttering, slow game loads, and blistering keyboards, the 15-inch IdeaPad Gaming 3i1 laptop with an optional 120Hz refresh rate features an up to 10th Gen Intel Core i7 H-Series mobile processor.

The IdeaPad Gaming 3 will offer AMD processors as an option later this year.21 High-octane gaming sessions on this new laptop can last longer than before, supported by improved thermals with an extra heat pipe dedicated to the discrete GPU in its thermal array, plus dual thermal vents for better airflow.

The new purpose-built IdeaCentre Gaming 5i sports cool blue ambient lighting at the front and is equipped with notable performance features, such as up to Intel Core processors and up to NVIDIA GeForce RTX 2060 GPU. Sleeker than before and available in an iridescent Chameleon Blue hue, the improved thermals on this tower can both cool the system and hush fan noise under heavy gaming loads. The IdeaCentre Gaming 5 will offer the latest AMD desktop processors as an option later this year.

Most of these laptops will be available in May of 2020, while there is one exception. The Legion 5Pi will not be available for purchase in North America. The prices range from $729.99 to $1,599.99 for the base laptops for each model.

NVIDIA GeForce RTX 3090 Now Available – Starting at $1499 US, Here’s Where You Can Buy The Fastest Graphics Card On The Planet