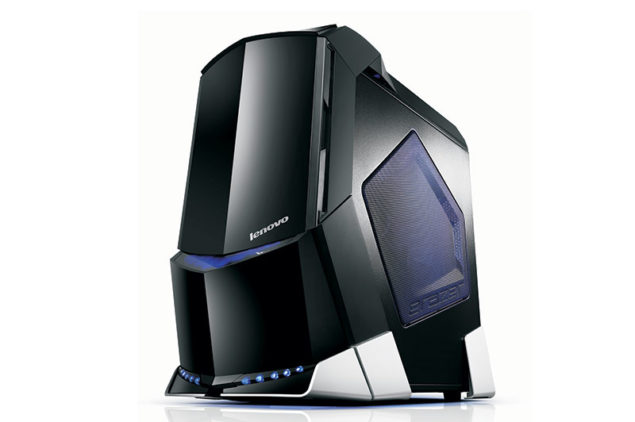 Lenovo has unleashed a variety of new devices at the CES 2013 including the Erazer X700 gaming PC which comes with AMD Radeon HD 8950 3 GB GPU. The Lenovo Erazer X700 features a Core i7 processor, 16 GB of DDR3 Ram and 2 TB of storage capacity.

However the most important thing to note is that the Lenovo Erazer X700 either ships with SLI'd GTX 660 1.5 GB (OEM Version) or Crossfire'd AMD Radeon HD 8950 3 GB graphics card. You heard that right, the Lenovo desktop is the first OEM Desktop to ship with a Sea Islands HD 8000 series cards. Although it isn't known if the Radeon HD 8950 3 GB used on the Lenovo desktop is a OEM specific product with castrated specs like the GTX 660 1.5 GB or a fully enabled Venus Pro GPU.

One thing's for sure, the next-generation AMD HD 8000 'Sea Islands' series including the Radeon HD 8950 3 GB support the same 3 GB memory buffer with a 384-bit memory buffer. The reason Lenovo thinks the replacement to GTX 660, the Radeon HD 8950 could be that AMD has developed such a power efficent chip that it consumes the same level of power as the GTX 660 but offers better performance over the Radeon HD 7950 Tahiti Pro. That is yet to be learned.

According to Lenovo, the Erazer X700 will be available in June 2013 at a price of $1499. This could prove that the Sea Islands HD 8000 series is indeed heading for a Q2 launch schedule  More to be known about Sea Islands at CES, most probably.