Earlier Microsoft announced that it will be holding Windows 10's next showcasing event this January. Microsoft described Windows 10 as the next chapter in Windows history owing to the claim of several major improvements in its design and the operating system itself. One of the major innovations expected is the link to all of the devices in one operating system as Microsoft has been rumored to change the Xbox One dashboard accordingly as well. Xbox One is expected to get a Windows 10 update will which boost the popularity of products featuring Windows OS because of the massive support that it will promise. Well Windows 10 has just seen a massive leak, and we're here to tell you about an all new Xbox app to debut with Microsoft's next OS. 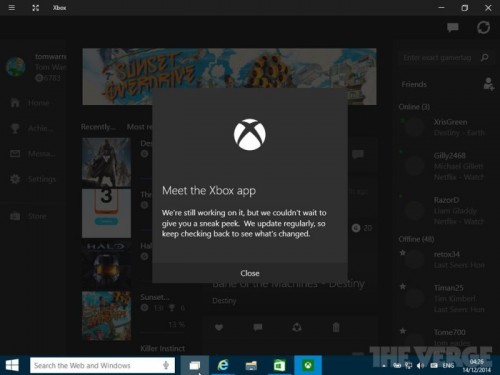 A new Xbox Application has showcased onto leaked media which is claimed to be the central link to the Xbox system which includes access to news feed, store and achievements, all in one place. This is an early preview of the app so it means that there is a lot more still to come so you can keep your fingers crossed for a much more comprehensive integration of all the Microsoft platforms.

On the other more software front, Cortana integration is being added to Windows 10 and this is a major step forward as finally Microsoft has realized how important such an add-on can be. For those who don't know what cortana is: cortana is basically a voice recognition system by Microsoft. Yes, its very own and is somewhat similar to Siri on Apple and S voice on Samsung. It was first introduced on Windows 8.1 phones and is now being added to Windows 10 with expected improvements. To view Cortana operating in its full glory for the first time, click here.

It is a step in the right direction to make multitasking easier for users and to reduce the effort to type in everything. This version of Cortana is very similar to the Windows Phone version, with access to the notebook, reminders, and interests. It's not completely integrated but the idea and the execution looks to be on the right track as one feels like having a virtual assistant with some required improvements which will be sorted with time.

Microsoft also added some new animations to Windows 10 Task-View Switcher and the traditional 'Control Panel' has been removed and integrated into the 'Settings' section. These releases shape up to be a very significant release as it is also a major look at how Windows 10 will shape up to be and how Microsoft's strategy is being derived by the new consumer requirements for convenience.