For a while now we've been covering the turnaround of Konami (TYO:9766), a company that made a very hasty retreat from video games to focus on amusements like Pachinko as well as its gambling operations about four to five years ago. This retreat from video games was reversed following a downturn in their amusements business with an increase in traditional games output and a focus on mobile titles. This has proven to be one of the company’s saving graces in a disappointing quarter.

In the three months from April to June, Konami has brought in ¥56.5 billion in revenue, a 3.4% year-on-year fall. The primary cause of this is within the amusements segment, which has fallen a staggering 50.6%, from ¥6.6bn to just ¥3.3bn. Sports has also fallen slightly, 3.7%, though the Digital Entertainment (video games) and Gaming & Systems (gambling) segments have both seen an increase, helping to mitigate the drop within the amusements segment.

Silent Hill: The Short Message Has Been Rated in South Korea 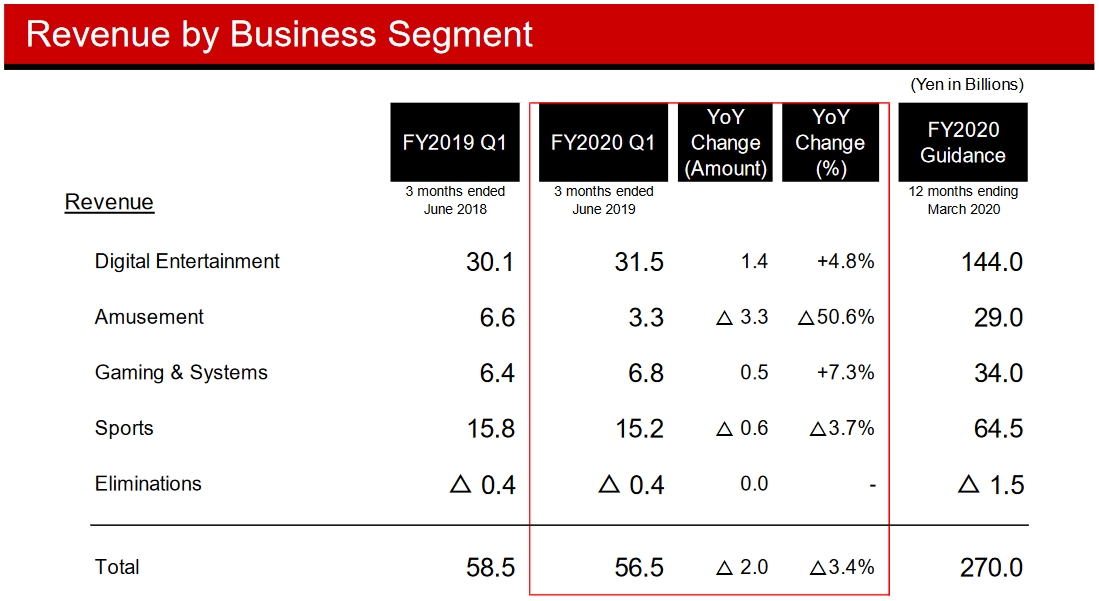 Konami's Gaming and Gambling - Picking up the Slack

In conjunction with the changing times, the preference for enriching daily life through full and abundant experiences in personal spending has been strengthened. In the game industry, new experiences through game content are being offered in various ways, including eSports, which is regarded as a form of sports competition and is becoming well-known to a wide range of users and attracting more and more fans.

This is particularly the case for the company within mobile titles, where the company has seen a high amount of spending from titles like Yu-Gi-Oh! DUEL LINKS as well as Pro Evolution Soccer 2019, the former leading in revenue within the global market and the latter having now been downloaded over two-hundred million times globally. Other titles, like PROFESSIONAL BASEBALL SPIRITS A and JIKKYOUPAWAFURU PUROYAKYU, have been reported as performing strongly in the domestic market of Japan.

Spending on in-game purchases has also been a strong factor for Konami within the home-console market, particularly that of loot-boxes in the form of player packs in the myClub mode of Pro Evolution Soccer 2019. Furthermore, releases of "Anniversary collections" of Arcade Classics, Castlevania and Contra have proven to be reasonably successful. In all, the segment has generated ¥31.5bn in revenue, with profits of ¥9.7bn.

Gaming & Systems, covering gambling activities from Konami, has also proven to be successful for the group, with the caveat of lower profit as a result of lower numbers of high-margin items being delivered, as well as an increased cost from a growing number of slot machines under participation agreements with other operators. Revenue for the segment came in at ¥6.8bn, a ¥0.3bn YoY rise. Profits, however, fell from ¥0.9bn to ¥0.2bn now.

The gaming market is continuing to see growth with the worldwide development mainly in Europe and opening of new casino facilities and integrated resorts (IR) which include casinos. Furthermore, measures to revitalize the industry were implemented mainly targeting young people.

Looking towards the future of the two segments, Konami looks to release a number of titles in the Digital Entertainment segment. This includes Pro Evolution Soccer 2020 worldwide, as well as a new title in the Contra series. In addition to this, for the first time in a number of years, the new version of Professional Baseball Spirits will be released internationally, in addition to a new title in the Yu-Gi-Oh franchise. While the number of titles isn't large, Konami should see particular success from their long-running franchises.

Gaming & Systems, on the other hand, will likely see steady results throughout the coming year unless Konami sees the full rollout of a new cabinet system (KK 43) as they hope to focus on. Should this happen, the segment could very well see a large boost. The company also hopes to see a further rollout of their SYNKROS casino management system, as well as further participation agreements through the expansion of games and services offered.

Konami Reveals Revivals of Several Their IP from Indie Devs, Including La-Mulana Creator

As mentioned at the beginning of this piece, one of the biggest issues Konami has had during the quarter is the amusements section. While this could certainly be a one-off situation, pachinko and pachislot have seen diminishing returns across multiple Japanese companies primarily as a result of government regulations. As for the particular reason for this quarter's lower figures, Konami had this to say:

For the three months ended June 30, 2019, total revenue and profit from this business decreased due to the timing difference of product launches.

This certainly does appear to be the case, with the company having a line-up of seven machines to be released between the end of the quarter to the end of the financial year, which should certainly help propel revenues and profits to the levels expected by the company.

One area on a constant downturn is in the Sports segment, formerly health and fitness. Despite the Japanese government initiatives pushing to improve the health and fitness of the people, Konami isn't seeing any additional benefit from this. Indeed, this marks the seventh consecutive fall in revenue. The company has stated that the fall in revenue is as a result of the closure of directly-managed facilities.

We also continue to enhance our fitness services and provide personal programs matching their purposes to support as many customers as possible to have longer fitness by satisfying their various needs.

With a number of video game releases on the horizon, the Digital Entertainment segment should prove to be a strong one for the company. This would be particularly true if Konami would, as I have said in the past, utilise their more popular IP's such as Metal Gear Solid, Silent Hill and Castlevania. Beyond this, the company should also see a strong boost within the Amusements segment through the launch of seven extra machines, while Gaming & Systems should prove stable, but will only benefit from the launch of one system, the Concerto Opus, in Europe.

In all, Konami is projecting annual revenues of ¥270 billion, with operating profits of ¥47 billion. This matches the forecast figures released at the end of the previous financial year.

The Silent Hill “Sakura” Story Will Feature Plenty of Mystery; Will Be More Than A “P.T. Demo”