Watching Konami (TYO:9766) over the previous financial year saw a steady progression, with the reaping of rewards from earlier investments right at the end. At the very start of the year, profits fell as a result of increased R&D. By the second quarter, profits had levelled off with investments remaining steady and a boost from the release of Pro Evolution Soccer (PES).  The success of PES and other games led to a strong Q3 and built a strong foundation for the end of the year.

For the financial year ending March 31st, 2019, Konami reported in its financial reports revenues of ¥262.5 billion, with operating profits of ¥50.5bn. This actually marks the fifth consecutive year of profit growth for the company, with it also being the second year in a row that the company has hit record operating profit. 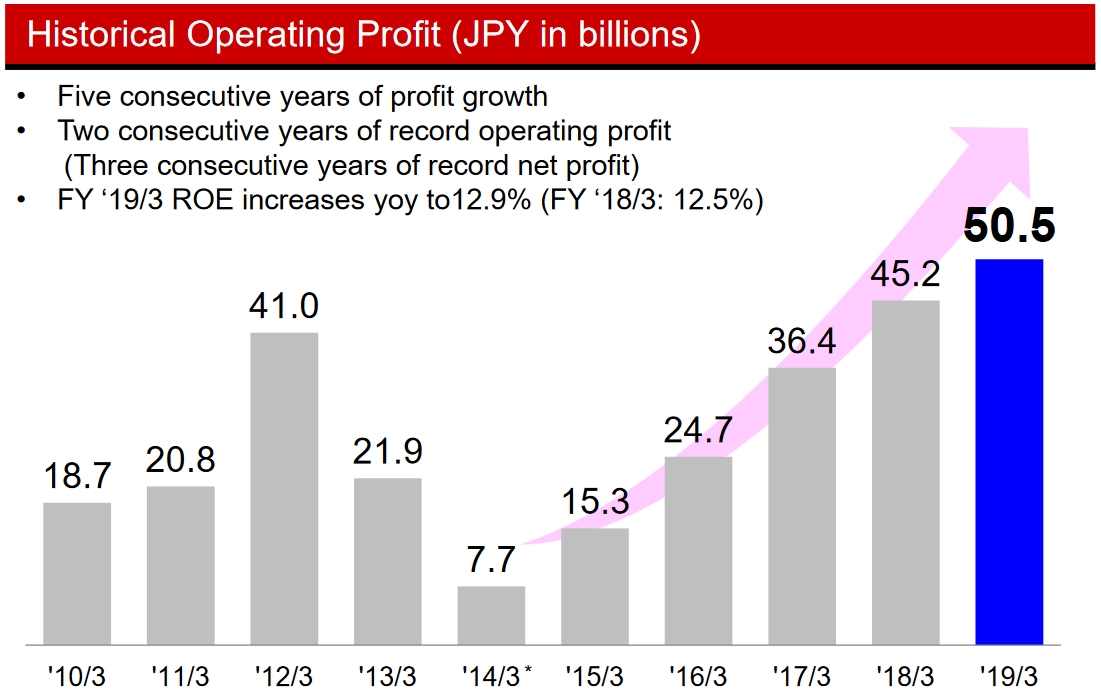 Konami and Games - Returning to What Made the Company

Konami has a long history in video games, from their successful arcade years (Frogger, Track & Field, Gradius, Contra and more) to building a roster of IP's that any company would be envious of (Metal Gear, Silent Hill, Castlevania, Suikoden and Pro Evolution Soccer to name a few). Then from 2013 to 2017, there was a seeming retreat from traditional video games, with only a handful of releases to speak of.

However, the releases like Metal Gear Solid V in 2015 ('16/3 FY above) and Pro Evolution Soccer kept proving to be successful, with the 2018/19 financial year proved to be the companies first true return to games, at least in any quantity.  Over the current year, Konami saw revenues for Digital Entertainment, which covers video games for PC, consoles and mobile, rise 17.8% year-on-year, to ¥141.7bn. Profits saw a similar rise, 17.2% YoY to be precise, hitting ¥43.8bn. Both revenues and profits were far higher than the guidance targets for the year.

as for mobile games in the Digital Entertainment segment, Yu-Gi-Oh! DUEL LINKS, which is now celebrating its second anniversary since its release and has surpassed 90 million downloads, has led our revenue in the global market. In addition, Winning Eleven 2019 (known overseas as PRO EVOLUTION SOCCER 2019) has increased its revenue through a variety of TV commercials.

Other Entertainment Succeeding while Fitness Fails

Much like other Japanese companies, Konami also has divisions in both arcade machines and Pachinko. Following a downturn that impacted every company, including the previously covered SEGA (TYO:6460) and Capcom (TYO:9697), Konami has shown growth in both revenue and profit for both the Amusement and Gaming & Systems divisions.

Amusements, which cover everything from arcade games to pachinko/pachislot machines have seen a decent amount of improvement, driven by popular arcade titles like Bombergirl, Dance Dance Revolution and Mah-Jong Fight Club. In addition to this, gambling-style machines (medal games) like Grandcross Legend, has performed well after being updated to offer "better performance and gameplay".

For the future, the company have now launched a fully owned subsidiary in Thailand, hoping to take advantage of the growing economy in south-east Asia. In addition to expanding internationally, the company are hoping to promote engagement through eSports tournaments. Specifically, the company had this to say on the matter:

we continue to make efforts to develop the global market through the expansion of eSports tournaments, including the “KONAMI Arcade Championship,” which is celebrating its eighth year as of January 2019, and by improving the BEMANI brand. As for mah-jong content, we further developed the MAH-JONG FIGHT CLUB brand, where we strive to deliver new and fun entertainment for game and mah-jong fans through exciting battles between club teams and our “KONAMI MAH-JONG FIGHT CLUB” as part of the professional mah-jong league (M League) that opened from October 2018.

For Gaming & Systems, which incorporates the gambling operations of Konami, there has also been noted growth. This has been driven by the Concerto series of slot machines, as well as the Fortune Cup horse race betting station. In addition to the stations themselves, the company also offers and runs SYNKROS, a casino management system. This has also been rolled out to mobile devices, with expectations that the division should continue in its expansion. 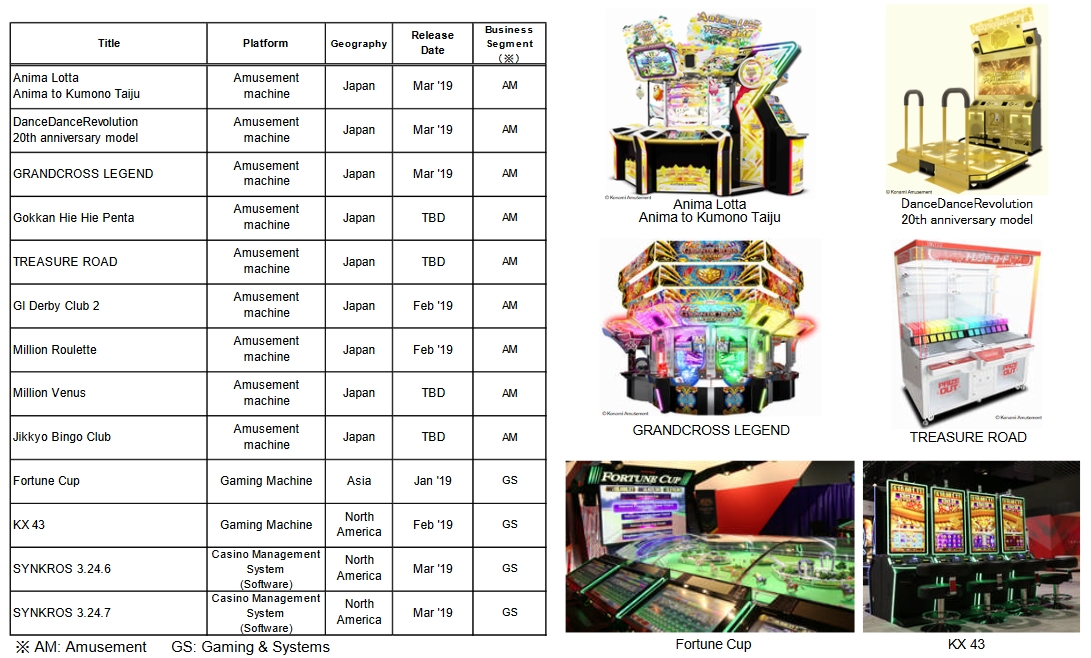 The one remaining now comes under the category of Sports. Despite government plans in Japan, revenue isn't increasing. Worst of all, profits are decreasing. However, it needs to be noted that part of the cause of this is as a result of prior investments and also events beyond the company’s control.

For the year ended March 31, 2019, total revenue and segment profit from this business decreased due to closing of the directly-managed facilities, the effects of repeated natural disasters, and prior investments of renovations of existing facilities including fitness machine renewals and launch of the new school programs.

Expectations for the future do show an increase in revenue, from the opening of new and expanding of current facilities. Profits are not expected to rise above previous levels since current extra-ordinary investment as a result of natural disasters is complete.

Strong Expectations for the Future, Though Profits Will Shrink

For the current financial year, results are expected to be strong. Konami was actually expecting operating profits of ¥52bn, which would actually be yet another consecutive increase as well as a company record. However, this won't actually be the case as a result of a one on ¥5bn expense as the company will move to the "Konami Creative Center Ginza" building. This move, however, is expected to reduce expenses by ¥2.5bn per year from the 2020-21 financial year onwards.

The line-up of titles in Digital Entertainment isn't really reflective of the investment earlier in the financial year, so as to how successful they will actually be at meeting targets remains to be seen. Of the titles the company are releasing, there still seems to be a focus on re-releasing older titles. The examples of this are Castlevania Anniversary Collection, Contra Anniversary Collection and Arcade Classics.

On new titles, the core release will be Yu-Gi-Oh! Legacy of the Duelist Link Evolution. Being a part of the popular Yu-Gi-Oh! brand and the first on the Nintendo Switch, it's highly likely this will see a strong launch. 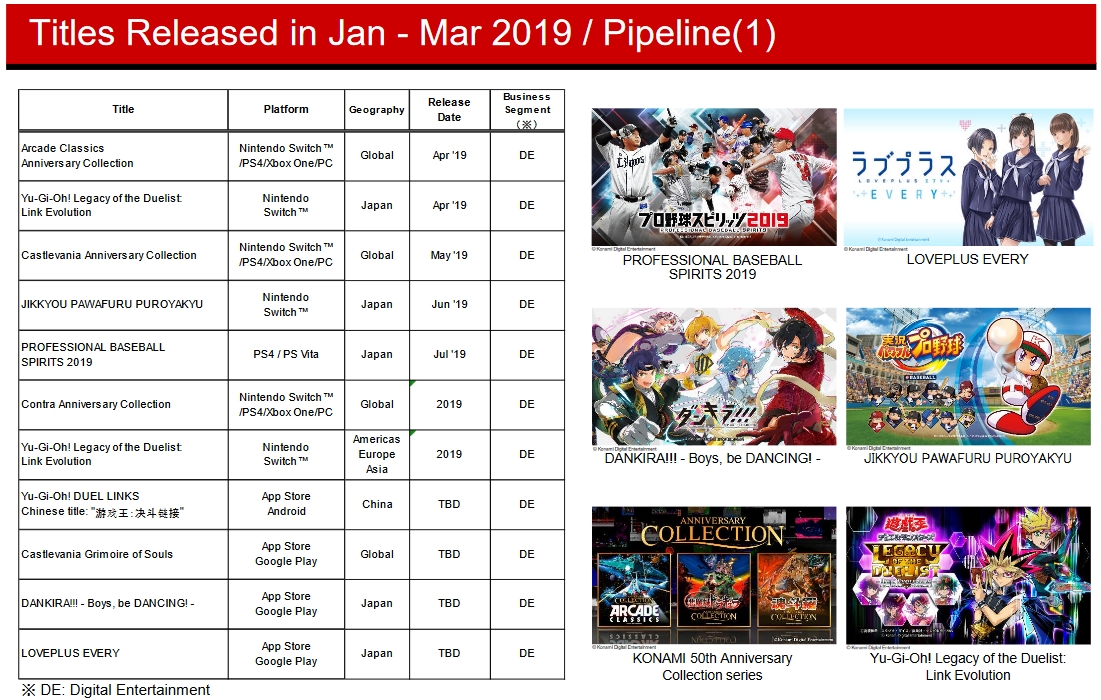 Looking further afield, there's no real information on where Konami looks to be going. Launching Yu-Gi-Oh! Duel Links in China is still a target and one that would undoubtedly have a big impact. However, the company will no doubt reveal further movements in traditional games, utilising their list of IP's to further expand on the growth Digital Entertainment has already seen.