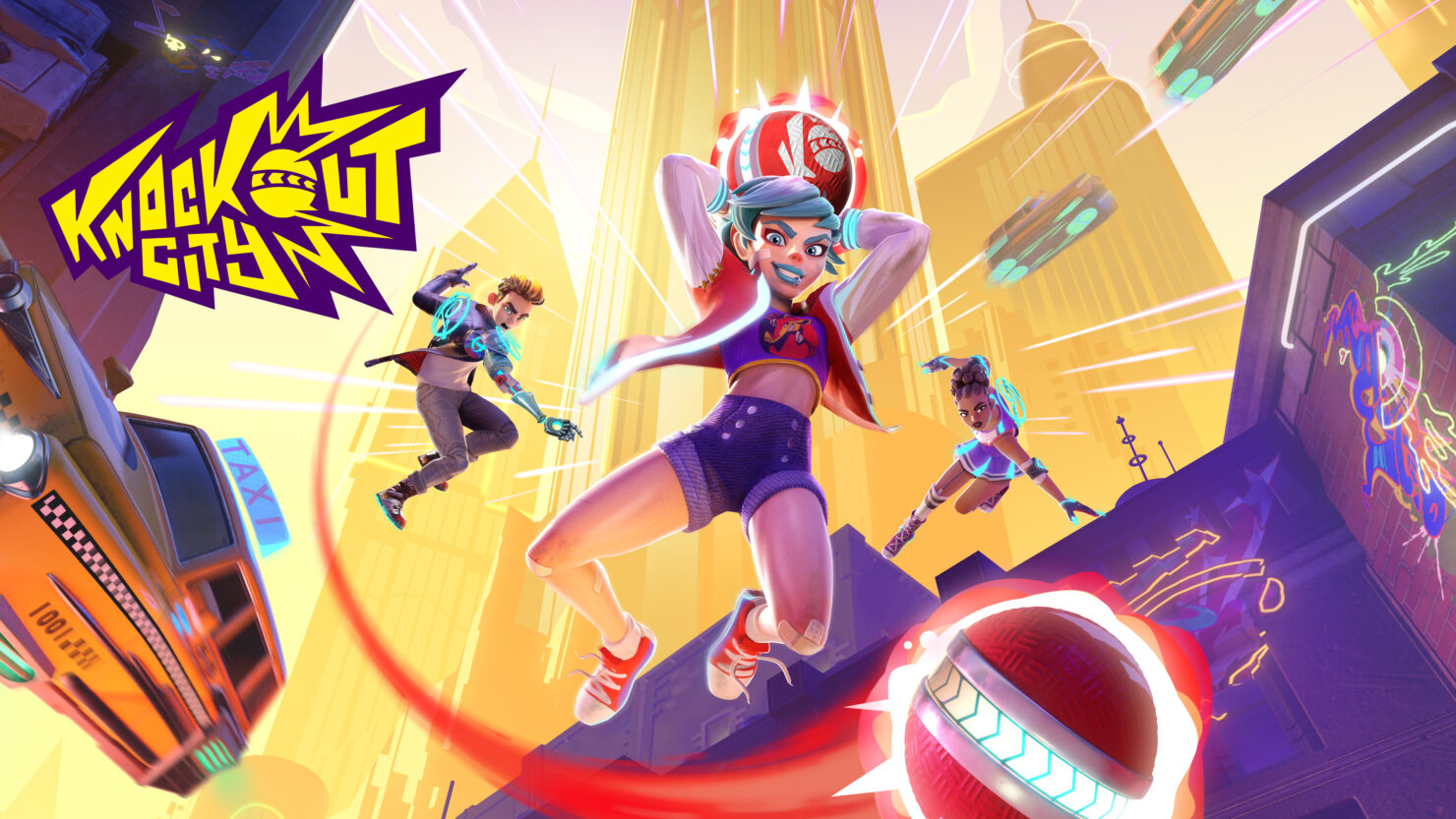 Who among you didn't play dodgeball as a kid? It's arguably one of the most played beginner sports but, for some reason, it hasn't had much luck in videogames so far.

That may be changing soon with Knockout City, an upcoming team-based action game developed by Velan Studios (also known as the makers of Mario Kart Live: Home Circuit) for the EA Originals label.

Admittedly, the game features a different kind of dodgeball which the developers themselves describe as 'dodgebrawl'. The basics are still deceptively simple, though: in the three-versus-three 'Team KO', which appears to be the default mode in Knockout City, players are tasked with grabbing the balls that regularly spawn at set points in the maps and throwing them at the rival team. Each character (they're all the same, by the way, featuring no special abilities to ensure a level playing field) has two 'hearts' and will thus be knocked out after being hit twice by a ball, unless they dodge or catch the ball with the proper timing, of course.

That's really just the starting layer, anyway. There are feints that can be performed in order to persuade your target to try and catch the ball too early, opening themselves to be hit; trick shots that will throw the ball in curved or lob shots behind obstacles; there's a shoulder slam that will interrupt foes and deprive them of the ball if they have it; there's passing to a teammate, of course, which will allow you to subsequently throw the ball at a foe with greater speed; and last but not least, you can actually become the ball in the hands of a teammate, which upon charging even allows for an Ultimate Throw move that's reminiscent to kill streak bombs in Call of Duty.

In addition to that, not all balls are the same. There's a Moon Ball that allows the bearer to jump higher (due to lower gravity, as if they were on the Moon itself); there's a Cage Ball that traps players hit into the ball form, and a Bomb Ball that you'll have to dispose of post-haste.

Other modes discussed included the kill-confirmed-like Diamond Dash and Ball Up Brawl, where no balls spawn, forcing players to become the ball themselves as mentioned above.

I should note that aiming isn't really one of the main skills top players will be required to have in this title. That's because you lock on targets, so timing and positioning become the key instead, taking cues from fighting games more than shooters.

Velan Studios revealed during the press presentation that Knockout City has been built on a custom engine called Viper, written in a custom programming language called V-Script. The goal, according to CEO Karthik Bala, is to solve the latency problem involved in throwing and catching a physics object like a ball, a much different issue than what shooters encounter with bullets. Code written in V-Script can run both backward and forward, which should help with the latency.

Graphically, at least, the game looks appealing and runs smoothly even at this stage. Granted, it is not the most complex game we've seen, but that's not really what's required of a competitive online game. The art style is cartoony without looking like a total rip-off of existing popular titles. Additionally, there's a ton of customization styles already available to express your style between clothing, taunts, celebrations, and so on. Cosmetic items will be unlockable either via real-money purchases or via in-game currency.

Knockout City will be available May 21st on Windows PC (via Origin or Steam), PlayStation 4, PlayStation 5, Xbox One, Xbox Series S and X, and Nintendo Switch. It'll feature cross-play and cross-progression from the release so that everything you unlock on a platform is also going to be there if you then opt to play the game elsewhere. The price is $19.99, but there will be a limited-time full game trial at launch with no limitation to progression, allowing anyone interested to just dive into the game and make an informed decision before paying anything.

At launch, Knockout City comes with five unique maps, six special ball types, and dedicated servers that will be used in Street Play (casual), League Play (competitive), and Private Matches (where you can set up your own custom tournaments if you'd like). Seasons are expected to deliver new content on a 9-week rotation, while Daily and Weekly contracts should keep completionists busy.

Also, unlike most competitive online games, the game already has a clan-like system. Players will get to create their own 'Crew' for up to 32 players and pick up their name, logo, banner, as well as practicing in-between matches in the Crew Hideout.

It is hard to say whether Knockout City will indeed become the next multiplayer sensation after playing only a handful of games. However, the fact that I'm eager to play again in this weekend's closed beta (available on PC only) is definitely a good sign. Meanwhile, check out the gameplay below, captured from one of the matches.