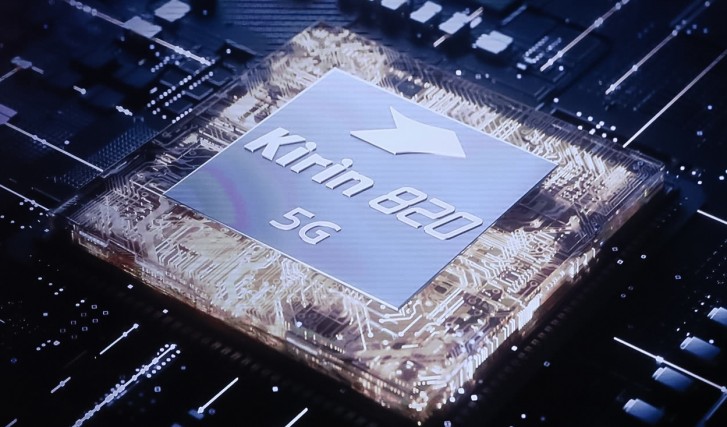 Earlier this month, we stumbled upon some benchmarks that showcased some performance metrics of Huawei's upcoming Kirin 820 5G SoC. It is a successor to last year's Kirin 810 and is expected to make its debut on the soon-to-be-released Honor 30s. Initial benchmarks of the chip looked good, with it performing on par with Qualcomm's Snapdragon 855. Now, Huawei has officially unveiled the Kirin 820 5G at a press conference today. Let's take a look at some of its features.

Like its, predecessor, the Kirin 820 5G is based on a 7nm architecture. It is an octa-core chip that consists of four ARM Cortex A76 and four ARM Cortex A55 cores. One A76 core is clocked at 2.36GB, while the other three are clocked at 2.22GHz. This should help bolster the performance of the chip by a significant margin.

The Kirin 820 5G gets a bump in the FPU department as well. It uses ARM's Mali-G57 6-core GPU. It supports features such as GPU Turbo and Kirin Gaming+ 2.0, something we've seen in a lot of Huawei and Honor phones of late. GPU Turbo is even advertised as one of EMUI 10's leading features. Lastly, there's even an onboard NPU that will assist with AI-related tasks such as photography, recognizing battery usage patterns, etc. Huawei claims that it is a whopping 73% faster than the Kirin 810's NPU. For imaging, the Kirin 820 uses a Kirin ISP 5.0 that supports several forms of noise reduction and is capable of shooting video at 4K 60 FPS. Based on the Honor 30s' camera specs, it is reasonable to assume that it can easily support up to five cameras in total; possibly even more. Support for 4K 60fps video recording is quite rare in mid-rangers and is often advertised as a flagship feature.

Lastly, the Kirin 820 5G uses Huawei's in-house Balong 5000 5G modem. It supports download speeds of up to 1.4 Gbps using 4x4 MIMO, 3CC carrier aggregation, and more. It'll be interesting to see how the chip fares against Qualcomm's mid-range offerings like the Snapdragon 765G and MediaTek's Dimensity 800 and 1000 series.