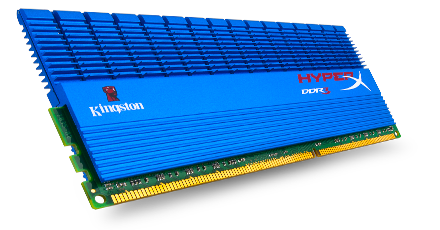 Kingston, the world's largest leading manufacturer of memory products has announced the availability of a new addition to it's HyperX high performance memory with the HyperX T1 Series Dual Channel Memory Kit.

The T1 series is in particular designed for the new Intel 3rd Generation i5/i7 Ivy Bridge processors. Available in memory speeds of 1600MHz, 2133MHz and 2400MHz with also 2666MHz variant to launch soon in a couple of days.

The rams support Intel's XMP 1.3 profiles and are available in flavors of 8 and 16 GB respectively.

Check out the press release below after the break.

DDR3 dual-channel memory kits ship of five models that belong to the memory "HyperX T1" series top of the Kingston Technology brand has been initiated. Blue anodized aluminum heat spreader is characteristic of comb shape on the exterior of the, "T1" series in the high-end memory module has been developed for third-generation Intel Core i7/i5 series both are installed.