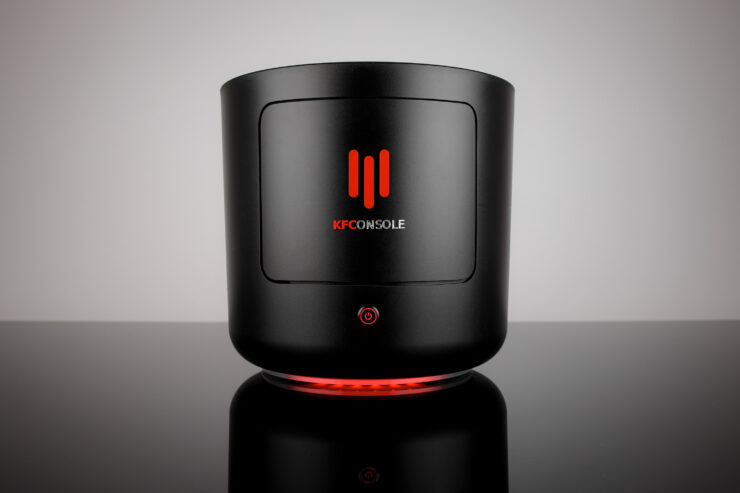 KFC, the absolute mad lads, have partnered up with Cooler Master to launch an epic-ly delicious gaming console which they are calling the KFConsole. I had to look twice at the date on my computer to make sure it wasn't April first - and I can confirm that it isn't. The Twitter account in question is a new branch of KFC called KFC Gaming and before you ask - yes it is verified! It looks like this is happening folks, KFC has an epic gaming console slash PC out that you can game - and this is blowing my mind - heat your chicken wings on!

Before we go any further take a look at this EPIC announcement trailer by KFC Gaming which takes a potshot at both XBOX and PlayStation by saying that the console war is over:

The console wars are 𝒐𝒗𝒆𝒓.

The gaming console by KFC (which is actually a miniature PC) looks kindof like a giant hotwings bucket, and contains a special compartment over the heatsink where you can place actual chicken wings (or whatever your fried chicken of choice) to heat up while you are gaming! If this isn't peak 2020, I don't know what is.

This console (or mini PC) will actually be created by Cooler Master, so this is something which (theoretically) you should *actually* be able to buy. The launch page for this console can be found over here and we also see more details. The page lists it as VR Ready and supporting 240 Hz on 4K displays which indicates an HDMI 2.1 port! The specs also support Ray Tracing - which any current generation console absolutely has to.

Of course, let's not forget the killer feature of this console: the fried chicken heater. Cooler Master and KFC have installed a small drawer where the hot air from the heat sink will pass - keeping your crispy fried chicken, well, crispy, for extended lengths of time!

The KFC gaming console slash PC appears to be powered by Intel's Compute Element PC combined with what appears to be an NVIDIA GPU. While only ASUS is mentioned as the graphics partner, the schematic they have shown lists a GeForce RTX card so I am assuming we are looking at an RTX 2070 or above here (probably even an RTX 2080 / SUPER). The page also mentions that the console will feature 2TB of NVME SSD capability - which is more than enough to house a vast library of games.

If that wasn't enough, KFC Gaming also appears to have their social media strategy in order with what appears to be a very Wendy-like manager taking potshots at anyone within shooting distance (we love it!):

Have you been living under a rock? pic.twitter.com/iDGiN2n3ox

There was even some clapback at people asking whether console was really the right term for a gaming device like this:

What exactly do you think a PlayStation or an Xbox is?

I know what most of you are thinking, where can we throw money at to get this delicious piece of gaming tech. According to various Twitter accounts that appear to be aiding KFC Gaming in spreading the hype, the actual launch was going to happen on the 22nd December 2020. This better not be a paper launch KFC! or you will face the full wrath of the gaming community.

What do you think of the KFConsole?