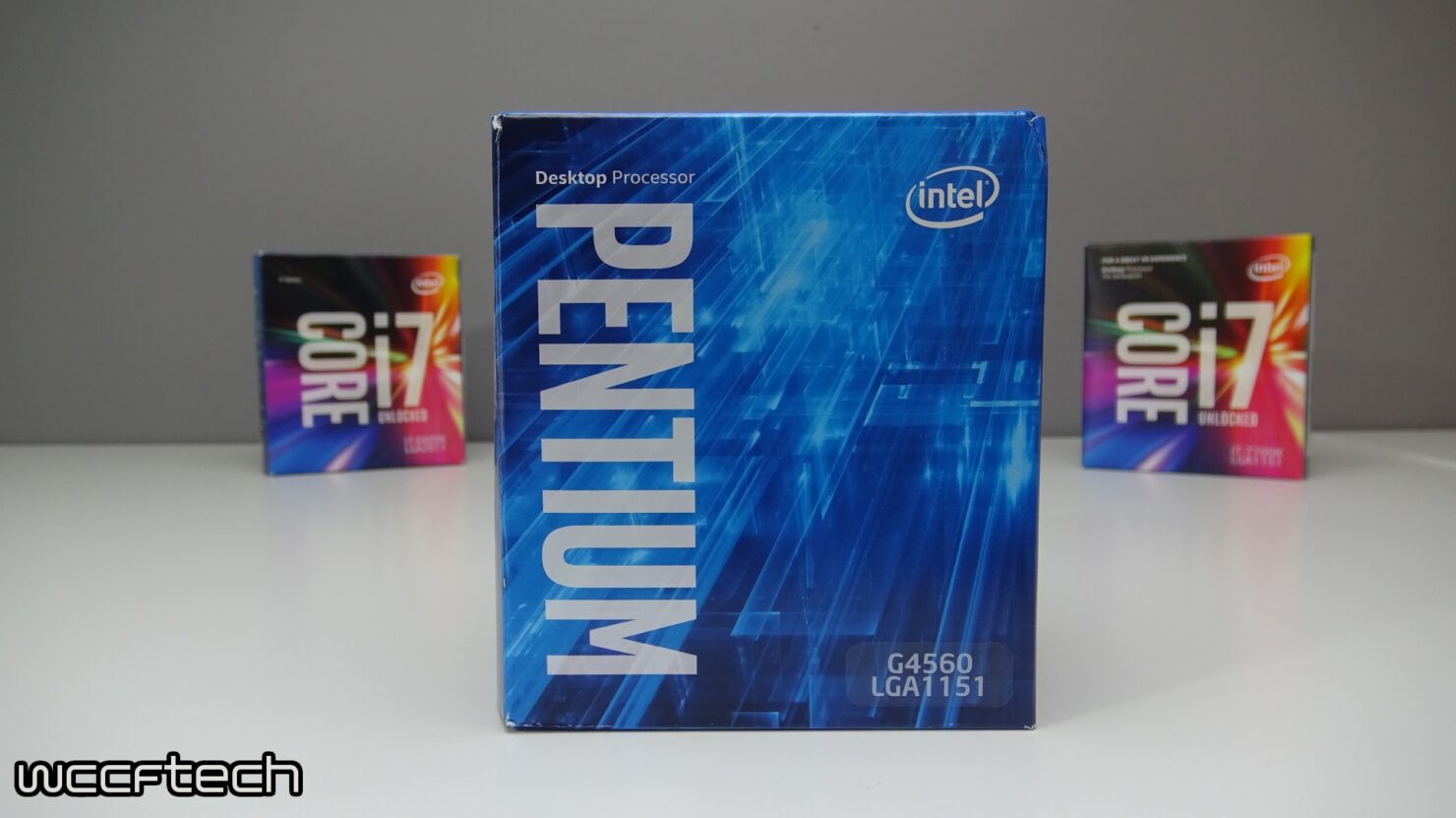 The G4560 is the entry level Pentium Processor. In the past I wouldn't have given the pentium line a second glance, even with the overclocking friendly G3258 of the Haswell era. Dual cores simply don't interest me. However, I've never had much issue with the Core i3 since it's at least bringing hyperthreading to the table and offers up 4 threads. Times sure do change, as that's now available on the $64 MSRP Pentium G4560.  We wanted to do this earlier but haven't been able to track down this CPU until recently.

Bringing a dual core, quad threaded CPU to market for only $64 MSRP is finally offering competition to AMDs lower cost Athlon line that, until now, has gone relatively unchallenged. But that's not what this is about today. We've seen loads of content on the Pentium already but today we want to focus on helping that entry level budget minded gamer see how the G4560 plays out when paired up with the Radeon RX series of graphics cards, we'll be looking at Pascal cards on another day so stay tuned for that one.

Is Intel Killing Off The Budget Champion, The Pentium G4560?

For DX11 and OpenGL we utilized FRAPS for capturing performance during our runs. For our DX12 testing I wanted to take a moment and thank the guys at CustomPCReview again for helping develop a tool that will now allow us to deliver the same level of results for DX12 and Vulkan as we have with DX11. DX12 tests were conducted with OCAT and once the runs are all completed three times the averages for average FPS, 1% low, and .1% low are taken and plotted. We use 1% and .1% lows rather than absolute minimum as the absolute minimum typically represents an outlier frame and doesn’t typically represent actual gameplay.

BUT KEITH!!! Why would you compare the Pentium G4560 to the Core i7 7700k?!  Easy, you wouldn't.  The i7 exists only to show how the cards would perform without restriction.  I already know that a lot of people are going to take issue with this, but I needed to establish a GPU bound scenario as a control so the i7 7700k at 4.5GHz fills that role and should only be looked at for that purpose.

Sticking strictly with the Radeon RX Series to see what cards line up best with the Pentium and what kind of performance delta you would see with a higher end CPU.  We're using the Sapphire Nitro + RX 460 4GB OC for the entry level representation.  The Visiontek RX 470 OC will be representing the current mid-range Polaris cards, while the XFX RX 480 OC will be holding down the higher tier of Polaris 10.  Because of the nature of the fluctuating core clocks exhibited on the reference design RX cards we did push the power limit to +50 so as to keep the cards at a constant clock speed when conducting the tests so that only the processor remained as the variable. 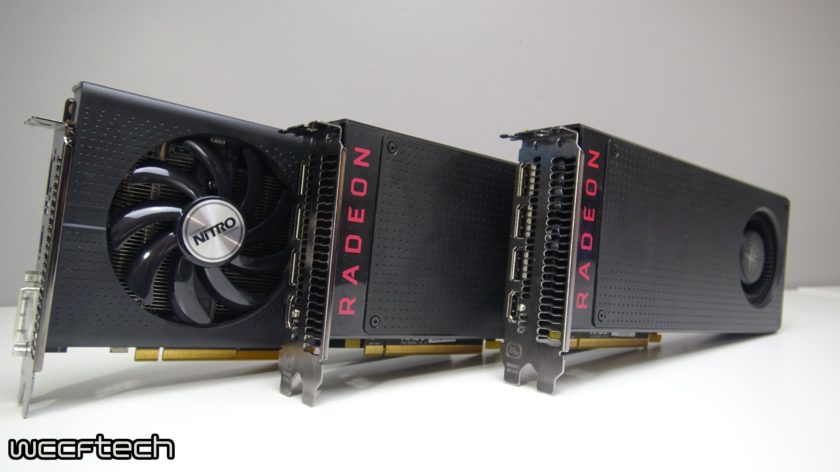 Firestrike has long stood as a quick go-to benchmark for quick comparisons but this time we've focused only on the Graphics Score to see if the Pentium holds back any of the cards in this test. 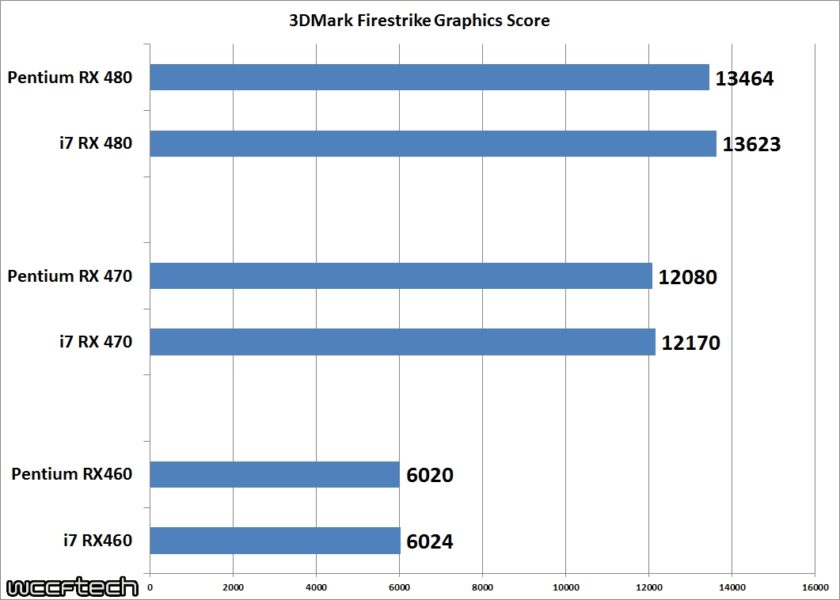 Ashes of the Singularity DX12

Ashes of the Singularity came out a while back as one of the first good DX12 benchmarks and thankfully it can still provide a good point of relative performance.  We did test this game in DX12 to see how the new API can leverage the core/threads versus a higher level CPU.  Needless to say this game will put more to use if you've got it.  While there were gains going past the RX 460 to the RX 470 moving past that yields no benefit. 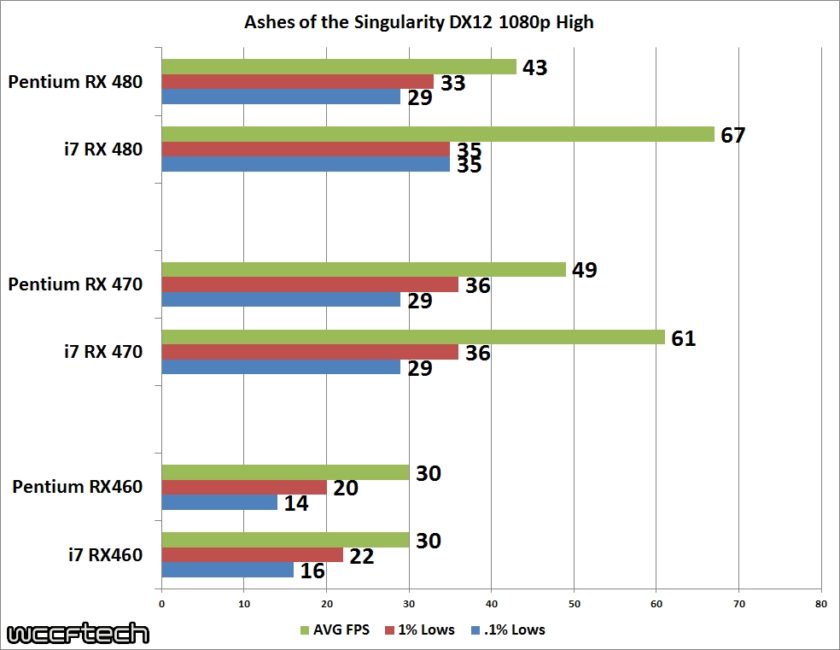 DOOM under the Vulkan API has handed out some very impressive results and with that I can only hope that we see more of this in the future.  Once again we see moving further up from the RX 470 yields very little.  The overall performance with the RX 470 was spot on between the Pentium and the i7, showing Vulkan can really help those lower end CPUs gain some grounds. 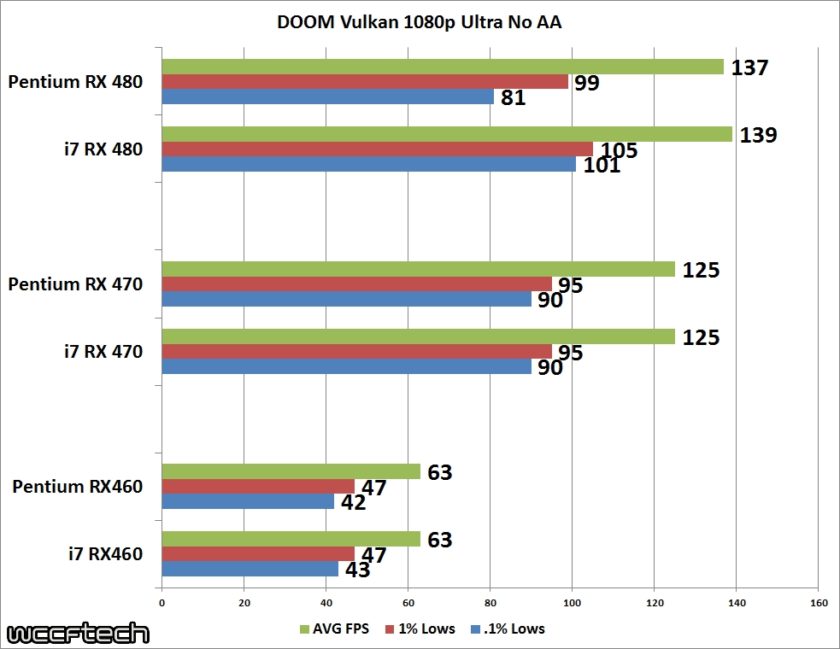 Gears of War 4 showed itself to be a CPU lover in our early testing of the game.  We saw it scale well with core/thread count and because of that these results aren't surprising at all.  This game pretty much kills the Pentium G4560 when it tries to carry anything more powerful than the RX 460.  But, it does just fine with the lower end Polaris 11 card. 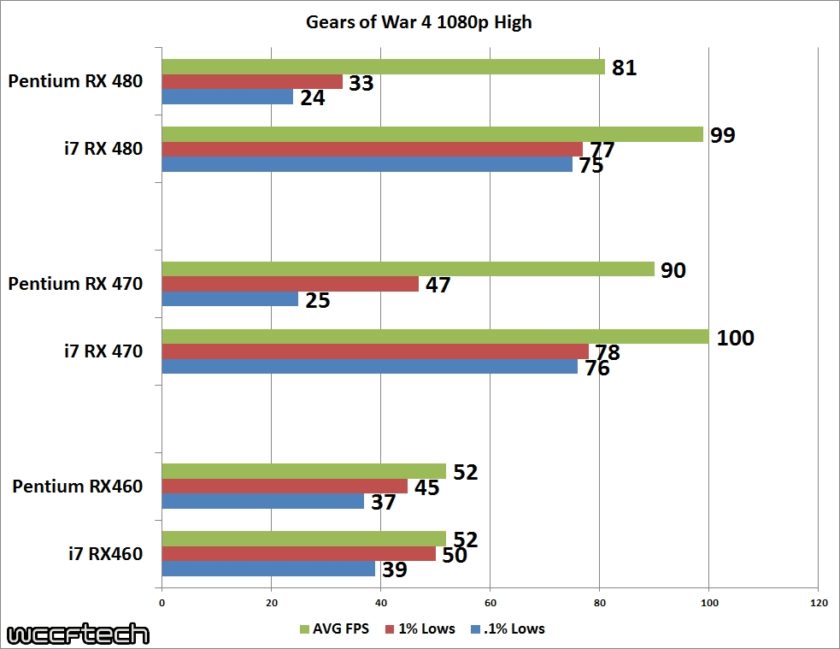 The Pentium put up a good showing with Resident Evil 7 showing love to all graphics cards with only the .1% lows falling a bit on the RX 480.  Games that love single threaded performance like this one don't seem to mind the low core/thread count of the entry level CPU. 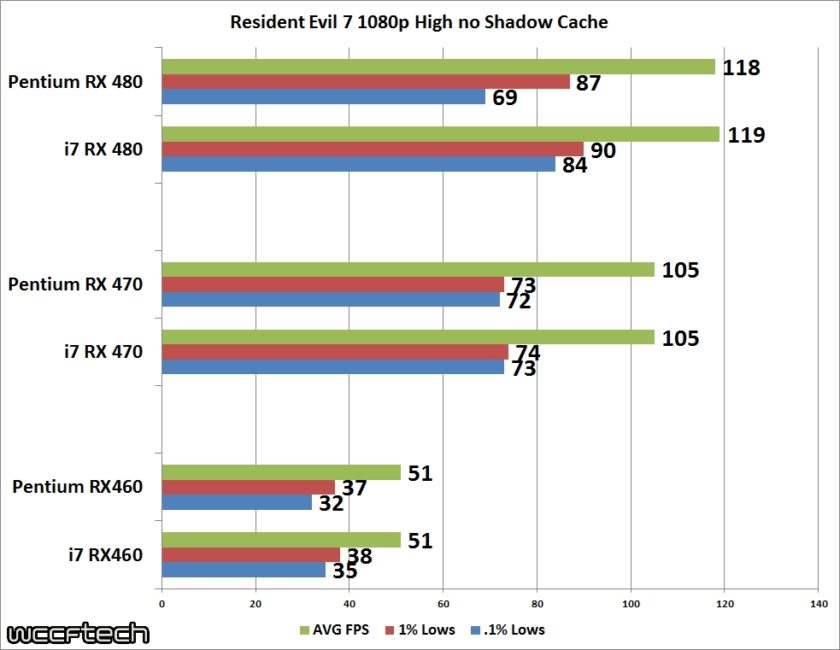 Much like in RE:7 we see a fairly good showing here as well, at least on averages.  The spread on .1% lows grows with each class of GPU.  While the averages may look good we're seeing degrades performance as the power of the GPU rises.  But is it held back enough for concern? 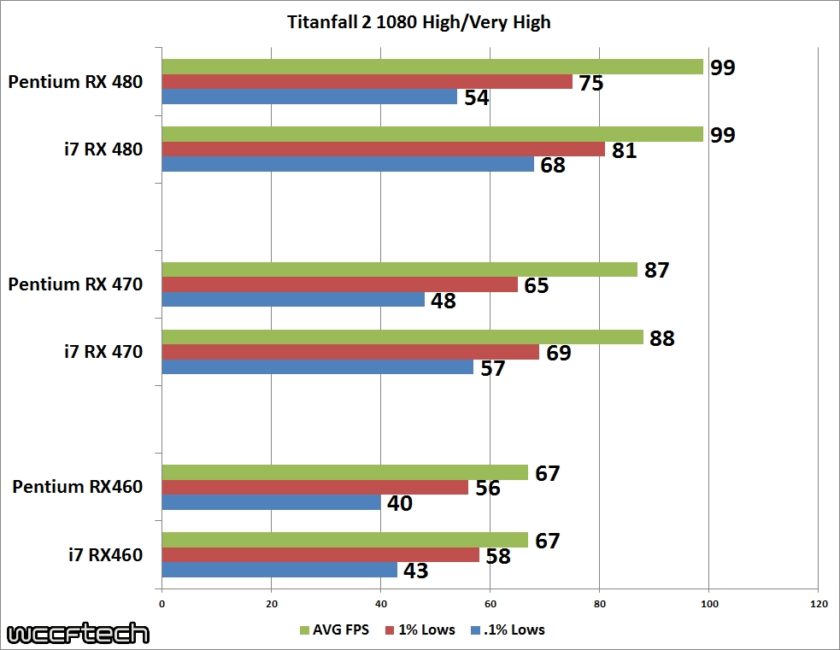 Say what you will about the quality of game that Watch Dogs 2 is, but the reality on the performance side is it eats up multiple threads the way a DX12 title would.  Which makes it a good comparison for CPUs in gaming scenarios.  Even at the level of the RX 460 we see the Pentium taking a pounding in this title.  The RX 480 is even held back to the point that it performs just under the lower classed RX 470. 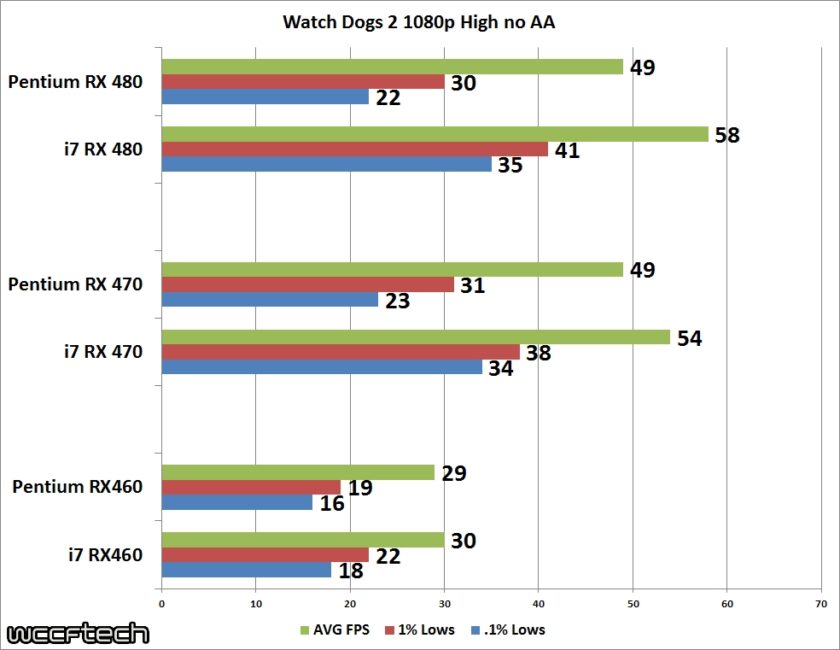 So, a $64 Dual Core CPU that's sporting Hyper-threading.  I have to admit it outperformed my expectations and looks like it could become a crowd favorite among budget building enthusiasts.  Compared with my time using Haswell and Sky Lake i3's it leaves me wondering why anyone would go for the i3 over these new Pentiums save for the iGPU, Smart Cache, and a little extra clock speed.  Is it a big baller CPU that renders others useless? No.  But it does offer up excellent gaming performance for such a low price tag especially when paired with an appropriate classed GPU.  The RX 460 is a great pair with little to no compromise in performance while keeping the costs insanely low, but if you want to go faster on the Radeon side of the fence make sure you hold your horses at the RX 470 level as going bigger gets you next to nothing but money not so well spent.