It's no doubt that at this point in time the Radeon RX 470 holds the 1080p bang for buck crown.  We've looked at the Sapphire RX 470 Nitro in the past and found it to be a great performer.  But today we're taking a look at the VisionTek RX 470 OC and see how it holds up when compared to some tough competition.  Interestingly enough VisionTek went for a reference designed card through and through.  When it first arrived I was hopeful for another unlockable card as the identifier on the PCB matched that of our XFX RX 480, but after cracking it open we found a few missing power phases indicative that this was a true RX 470, foiled I suppose.

What VisionTek Did Different

But that's not all in itself a negative and shouldn't be taken as such.  VisionTek did do one thing right in regards to the reference cooler, the core heatsink.  Unlike what others have done with the RX 470 when using the reference style cooler VisionTek stuck with the RX 480 design, meaning rather than a solid aluminum chunk they've used the cooler with the copper slug.  Since we're in true reference design fashion the I/O remains untouched sporting 3x DP 1.4 and HDMI 2.0 ports. Since this is an OC model VisionTek has pushed the core past the reference 1206MHz up to 1226MHz and the memory from 1650 base to 1750 base.  Thanks to the memory bump it's now matching its bigger brother, the RX 480 4GB, in terms of memory speed and bandwidth.  The only issue here is that they've done this all on a reference board which, much like the RX 480 we reviewed, results in quite the core clock fluctuation.  This instability in the clock left our card running around the 950MHz mark for most of our gaming benchmarks.

Okay, so the fluctuating core clock is a bit of a turn off, I get it.  But, let's take a look at the overclocking performance we were able to get out of this card.  I wasn't expecting near the push as what we saw on the Sapphire RX 470 Nitro since we are only working with a single six pin and a reference power delivery system, but the results were pretty good.  It took a while to nail down our top overclock that would make it though all tests and hold that clock. No fluctuations were acceptable for an actual overclock on our Polaris cards.

Overclocking led us down an interesting road here, we'll start with the core.  The core wasn't that hard to get up at making sure we went +50 on the power limit, but we quickly ran into a power delivery limit when we crossed 1100mV and found we had negative scaling.  So, we backed down the voltage to 1100mV and left it there while easing up on the core where we found 1300MHz to be rock solid.  Now, coming from an average out of the box state of 950MHz I'd say that's a healthy jump.

The memory was simple enough, it went straight to 2000MHz from its factory clock of 1750MHz without a hitch, anything past that was simply a no go.  The fan curve is the most interesting thing here.  Out of the box the fan curve seemed to be taken over by Crimson rather than what the card was designed to do, resulting in a peak stock temp of 80c while the fan never went past 22% or 1600rpm.  Sure it was dead silent, but those temps had to have something to do with the core clock since the GPU target temp was 76c.  Okay, that out of the way, taking over control of the fan allowed for it to get upwards to 40% or 2300rpm (still extremely quiet) but reduce the temps, while overclocked, down to 76c at its absolute hottest. 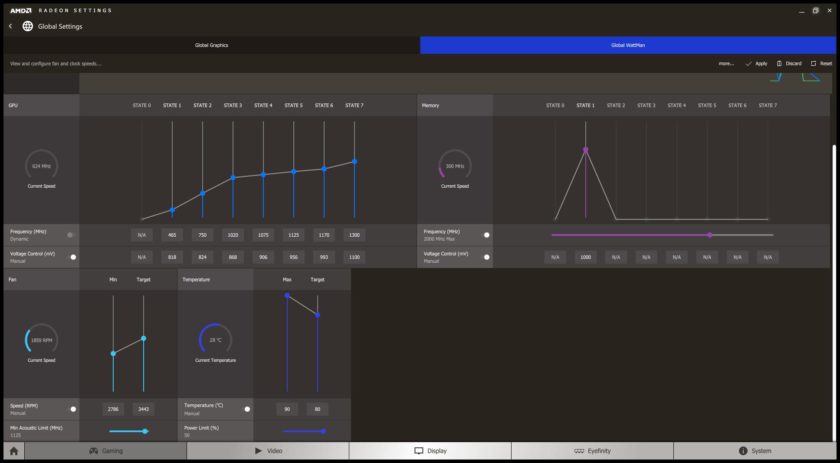 We tested on our X99 Broadwell-E based test sytem. For DX11 and OpenGL we utilized FRAPS for capturing performance during our runs. For our DX12 testing I wanted to take a moment and thank the guys at CustomPCReview again for helping develop a tool that will now allow us to deliver the same level of results for DX12 and Vulkan as we have with DX11. DX12 tests were conducted with OCAT and once the runs are all completed three times the averages for average FPS, 1% low, and .1% low are taken and plotted. We use 1% and .1% lows rather than absolute minimum as the absolute minimum typically represents an outlier frame and doesn’t typically represent actual gameplay.

*All testing was completed when these were current drivers*

Battlefield 1 was tested just like in our game performance review using the "Over The Hill" mission at 1080p using the Ultra preset in both DX11 and DX12.

DOOM was run at 1080p using the Ultra preset with TSSAA x8 enabled in both OpenGL and Vulkan.

DiRT Rally was run at 1080p using the Ultra preset with 2x MSAA and results were taken from the in game benchmark tool.

Deus Ex: Mankind Divided was run at 1080p using the High preset along with TAA enabled and results were taken from the in game benchmark tool.

Forza Motorsports 6 was run at 1080p using the highest quality settings but 2x MSAA.  Track used was Circuit de Spa-Francorchamps and run while in the rain to represent a more demanding load from the game.

GTA V was run at 1080p using the Very High settings along with 2x MSAA.  Results were taken from the final segment of the in game benchmark too.

HITMAN (2016) was run at 1080p using the Ultra preset along with SMAA in both DX11 and DX12.  Results were from the included benchmark utility.

RotTR was run at 1080p using the High preset but this go around no anti aliasing was applied.  Results were pulled from our custom run through the Geothermal Valley.

The Witcher 3 was run at 1080p using the High preset and H/W disabled.  Our custom benchmark includes a horse ride along the hillside, through the forest, and a jog through Crow’s Perch.

Temperatures were taken after a half hour run of Unigine Valley at Extreme HD settings.

Power draw was taken after several runs of the Firestrike Stress test and the peak power draw was recorded using a Kill-A-Watt.

So out of the box the VisionTek RX 470 isn't going to blow your socks off, but it's great performance for the money and practically sips power and is ridiculously quiet.  I know the quietness factor is subjective since I don't have a way to properly test that at the moment, but it's as quiet under load as the RX 480 is at idle and that's saying something. But push it a little, or a lot, and it quickly matches the performance of its bigger brother for a lot less money, heat, and noise while still staying under it in power draw.  While almost every other card maker has a wild and out cooling solution I'm glad to see that someone stuck with a bonafide reference RX 470 for those who could benefit from it.

For those who would rather watch than read, have a look at the video review above. Features some under the shroud shots too for those interested.