It appears that Avalanche Studios has come just a little bit closer to telling us when their next installment in the Just Cause franchise, Just Cause 3, will be released. They've also given us a little more information on the specifics of the game and they released a few more screenshots to go along with the great teaser video. We've covered it before, but now it's a little more concrete. 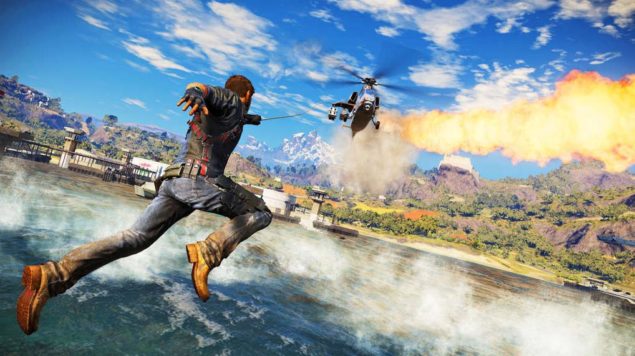 The newest trailer for Just Cause 3 has been released and confirms that it will be released this holiday season, 2015 on PC, PS4 and Xbox One.

Just Cause 3 will feature a lot of the same things that made the second installment exciting. And it might actually have a story as well. Maybe. But the story was never the focus of these games; the action and insane things you could accomplish were. And Rico is back.

There will be a 400 square mile map to explore and use as your playground to pull off devious stunts that you would never even dream of doing in real life. Living the life of an action star does indeed sound appealing.

Just as in the photo above, I remember finding all sorts of novel ways to use the grappling hook traverse the maps. Including hitching rides on helicopters or even jets. What a way to discover new points of interest on a map, right? Ever use that thing like Spiderman to try to swing from object to object? Yeah, that was always fun.

Just Cause 3 should be able to cater to our sense of adventure even more by giving us more of what we maybe didn't have in the second one; Weapons. I remember running out of ammo fairly quickly and having to run away much of the time as I tried to find new ammo. That grappling hook did work pretty well in melee battles, though. But this time around, Just Cause 3 seeks to make the weapons of the game more available to the player, so we can blow up things more readily.

To help with an apparent emphasis and development of the vertical space of Just Cause 3 they've given us control over a wing suit as well. So now once you're done climbing one of the skyscrapers of the game, or you accidentally get almost blow out of the sky while attempting to join the mile high club, you can use a wing suit to speed your descent to the Earth before deploying the parachute to gently glide down to safety.

Even this is going to be featured on multiple platforms, its the PC that will hopefully be take advantage of. If Avalanche Studios takes the time to use the tools available, then we could have one stellar game. Just Cause 2 wasn't horrible for the PC. It certainly wasn't optimized, but it wasn't unoptimized either. Better rag doll physics, a further LOD and generally better visuals can be had. Just Cause 3 is one game that could really shine on the PC, even if it doesn't have much of a story.