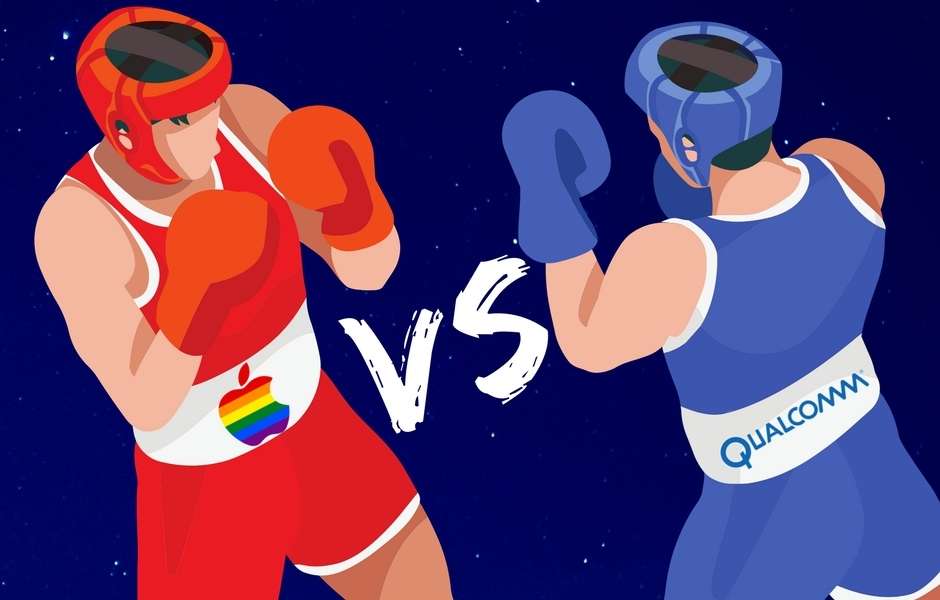 The multi-continent, rumbling legal battle between Qualcomm (NASDAQ:QCOM) and Apple (NASDAQ:AAPL) took another twist today with a jury awarding Qualcomm the win for a relatively minor case in the broad legal action currently ongoing between the two companies. Up for dispute in Federal court were three patents Qualcomm claimed Apple infringed which are aimed at speeding up connection times at boot up, GPU efficiency and faster download speeds.

Although the argument was for a relatively paltry total of $31m, it marks a significant point as it was decided by a jury and that jury awarded Qualcomm what it was asking for, namely a licencing fee of $1.41 per infringing iPhone. A drop in the ocean for Apple of course but one which it fought to defend, even claiming that one of its own employees had developed one of the patents underlying technologies and as such should be a co-owner of the intellectual property.
Ultimately the jury disagreed and although not expected to force Apple to the settlement table, the win was enough to send Qualcomm shares cautiously up by just over 2% on the day.

Keep in mind that this is just the warm up for the major action about to kick off in April between the two companies. An outcome of which has the possibility to force Apple to the negotiating table with potentially huge sums of money changing hands, or to send Qualcomm off licking its wounds with a business model which would appear unsustainable. Obviously the financial ramifications for both companies will be huge.

Qualcomm has been slowly racking up wins against Apple with bans in both China and Germany. In the former the ban has not been strictly enforced and is possibly/probably a chip currently in play in the ongoing trade discussions between the US and China, while in the latter Apple believes it has done enough to work around the infringing technologies and continues to sell iPhones in Germany.

Add on to that the win Qualcomm has against Apple with the US International Trade Commission and things are looking relatively promising thus far for the San Diego based chipmaker. There is a but here though - although the ITC ruled in Qualcomm’s favour, a sales ban wasn’t put in place due to the harm that could do to Intel (NASDAQ:INTC) whose chips were in some of the iPhones in question given that it would effectively hand Qualcomm a monopoly on US based mobile device modem chips.

Apple says it has since found a software workaround for the patent in question while Qualcomm has unsurprisingly been lobbying the ITC to reverse the original decision not to ban the iPhone models in question.

At Stake – Apple Margins at a Tough Time

Apple has been facing a tough time financially recently. We wrote (here) about its massively slashed earnings guidance a couple of months ago where it pinned the blame squarely on demand in China, cutting revenue forecasts by anything up to $9 billion if its top end range could have been believed and margin down 0.5% from its high estimate.

Let’s be clear though, Apple is still in a very strong position financially and has nothing to worry about in realistic terms. That much said, it is clearly in the twilight of its major boom product that has driven its growth for the last decade or so. Sales will continue of course, the ecosystem is fairly locked in now but barring any major innovation or cutting of its production costs, margins will get squeezed.

As such, it’s plain to see why Apple is so vigorous in its defence of anything which would eat further into its iPhone margins. 38% is still a great margin, one many companies would kill for but the expectation of the market is a stark glare to ever be facing. The general tech sector Q4 2018 selloff hit the stock price hard, as it did a lot of other technology companies, as did the January statement slashing expectations but the stock has made a steady climb since then, under the weight of expectation that a US – China trade deal/cessation of hostilities would bring the glory days back again.

The danger however is that the overall picture of a company, bloated with cash and in thrall to Chinese demand for continued earnings growth where the Chinese domestic market is shifting in favour of local producers with significantly cheaper offerings has left Apple turning to the ubiquitous “Services” business as a route to safety.

It’s worth noting that services is an industry investors love. Repeatable revenue with some kind of subscription pricing model, not requiring the “hit product” design and build cycle that things like the iPhone rely upon. As much as I personally dislike Apple and its walled garden ecosystem of control, I still feel the company has something to contribute to the technology industry and just wish it could find its true calling again. The House of Jobs seems to have given up on changing the world for now and as I wrote here, I can’t help but feel that Apple needs a CEO with a product vision again.