As you well know by now, ARK: Survival Evolved is one of the fastest growing Early Access titles to ever hit Steam. It's broken records at breakneck speed. And it's actually been enjoyable to play in its beta state. This week is Jurassic week, so below are the details on what to expect for the screenshot contest featured this week in ARK: Survival Evolved. 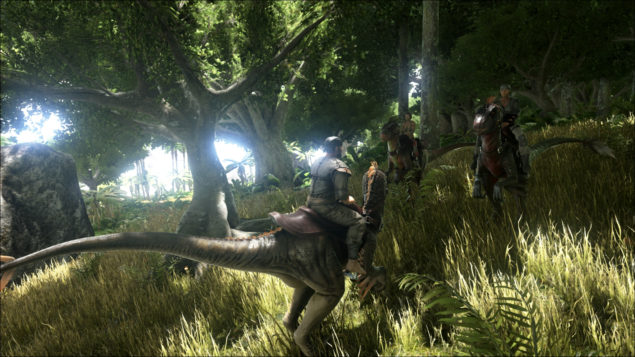 What a way to promote their game and interest in dinosaurs in general than to piggy back on one of the most prolific movie series of our time. I wonder if they planned ARK: Survival Evolved's Early Access release around the release of the next Jurassic Park. It's too good of a promotion.

And of course no special themed week wouldn't be complete without a contest that tests your skills at making unique and awesome memes based on that theme. Memes are a powerful force and we need more of them. So if you have the guts and the skill to take fanciful screenshots, you may just win the ARK: Survival Evolved daily screenshot contest, which means real-world prizes. The rules are posted below, so get that F12 (default Steam screenshot button) button pressing ready.

Also don't forget that this Friday will be a special event to mark the release of Jurassic World. The Spinosaurus will stalk the waterways and be available as a combat mount. There is sure to be a lot of destruction and chaos tomorrow, and of course more details concerning that event will be available then.

So get out there and make some of the most gorgeous screenshots you can for a chance for great prizes. Winning real stuff for playing video games is always a good thing.