The quarterly market watch report from Jon Peddie Research is out and shows some very interesting numbers. The PC GPU market shrunk by 18.6% on a quarterly basis and 10.7% on a year over year basis. Considering the YOY metric accounts for seasonality, it shows a significant shrink in the market. AMD seems to be the winner (by relative terms) as it managed to claw away market share and gain 2.3% while increasing its shipments by 21% in the discrete GPU segment.

The PC GPU market suffered losses in Q1 2019 with shipments declining overall. This is due to multiple factors, the effects of the lost stream from cryptocurrency mining are starting to be felt strongly. Intel's shipments declined by 22.5%, NVIDIA's by 12.7% and AMD's by 4.6%. That said, the DIY PC market (and the one we care about the most ) is still alive and kicking. In fact, the dGPU AIB market increased by 0.34% during the quarter.

Even though AMD's overall shipments declined by 4.6%, its discrete GPU shipments increased by 21%. Notebooks on the other hand took a less of a hit than the PC market at a decrease of only 3%. The cause of the PC shipment decline can be traced back to supply shortage of Intel parts which caused a trickle down effect on the supply chain and causing partners' shipments to decline as well (No CPU, No PC). 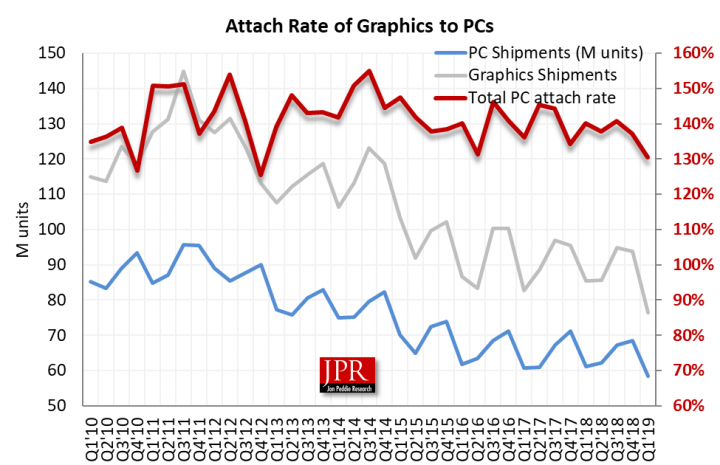 This is also the reason why AMD has been able to step up and gain market share, taking advantage of the vacuum offered by Intel's supply shortage. However, OEMs and AIBs are hesitant to switch over to AMD parts just yet as this requires the OEM to support two motherboards, supply chains and service - an added burden that most dont want to take on.

Its worth noting that the first quarter is usually seasonally down to flat so things can be expected to improve during the second quarter. That said, the 10-year average as mentioned by JPR is actually 9.09% and a decline of 18.6% is pretty far away from the mean attributable to the issues mentioned above. Here are the highlights of the report:

The first quarter is typically flat to down.

GPUs are traditionally a leading indicator of the market, since a GPU goes into every system before it is shipped, and most of the PC vendors are guiding cautiously for next quarter, an average of 6%.