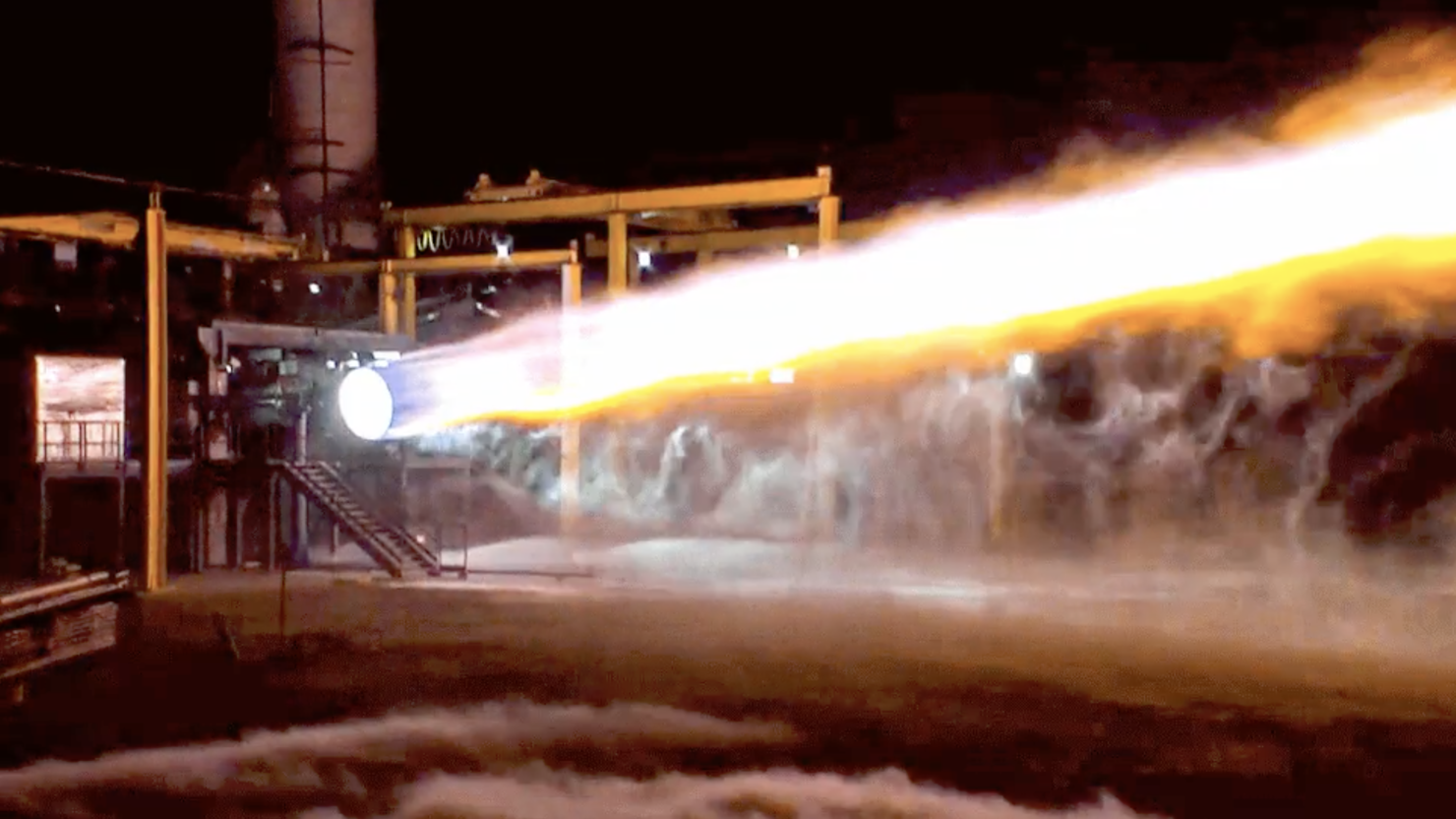 Blue Origin's BE-4 oxygen-rich, liquefied-natural-gas-fueled, staged-combustion rocket engine as part of a test at 100% power levels earlier this year. The engine is also displaying its 'gimbaling' capabilities. Gimbaling allows a rocket engine to slightly change its angle in order to aid the rocket to adjust orientation during flight. Image: Blue Origin

Retail billionaire Jeff Bezos's aerospace firm Blue Origin has successfully tested the largest rocket engine in America. Blue Origin, Elon Musk's Space Exploration Technologies Corporation (SpaceX) and the United Launch Alliance (ULA) are the only three American firms that are developing next-generation, heavy-lift rockets to kick off the space race, alongside the National Aeronautics and Space Administration's (NASA) Space Launch System (SLS) which will form the backbone of the agency's Artemis program aimed at developing and sustaining a human presence on the Moon.

A video of the test was shared by Blue Origin on its social media account and it shows the company's BE-4 rocket engine firing up in full glory. The BE-4 is a liquid natural gas-fuelled staged combustion rocket engine, which as the title suggests, uses natural gas as its fuel. It has been at the center of painful delays and deadline misses, which have harmed not only Blue Origin but also the ULA, which will use the BE-4 for its next-generation Vulcan Centaur rocket. The Centaur will launch Astrobotic's lunar lander later this year if the BE-4 engines are delivered to ULA.

It is also the largest American rocket engine out there, narrowing past SpaceX's second-generation Raptor methane-fuelled full-flow staged combustion rocket engine that is simply referred to as the Raptor 2. Specifications released by ULA for the Centaur outline that the BE-4 will be capable of generating 550,000 pounds-force* (lbf) of thrust. On the other hand, the Raptor 2 has successfully been generating 530,000 lbf thrust during testing, according to details revealed by SpaceX chief Elon Musk.

In addition to the BE-4 and Raptor 2, Aerojet Rocketdyne's RS-25 is the third engine vying to power the current generation of U.S.-based rockets. The RS-25 is also the oldest engine in the trio since it was responsible for powering the Space Shuttle into orbit before the program ended. Different upgrades to the engine during the Shuttle era have resulted in it being able to operate at 109% of its original thrust and generate up to 420,000 lbf and go as high as 111% in emergencies.

Blue Origin's video shows the BE-4 running a test that lasts for more than a minute in a crucial demonstration that mirrors the actual time that it would take the engine to launch either the Centaur or the New Glenn into orbit. New Glenn is Blue Origin's heavy lift rocket that will compete with the Centaur and SpaceX's Starship next generation launch vehicle system.

However, despite its engine being larger than the Raptor 2, the New Glenn will be a smaller rocket than SpaceX's. This is due to the fact that SpaceX will leverage its experience with the Falcon 9 to use as many as 30 engines on the new rocket, and give it the capability to launch 100 tons to low Earth orbit (LEO). In comparison, the New Glenn and Vulcan Centaur are designed to lift 45,000 kilograms and 27,200 kilograms to LEO, respectively.

SpaceX has also been busy testing the Raptor 2 since December last year, and the bulk of its tests have been successful. Unlike Blue Origin, which maintains a tight grip of secrecy on its testing, SpaceX tests its engines in full view of the public. This allows photojournalists to document the company's progress and has yielded some spectacular fireworks and clouds of smoke.

Finally, while the BE-4 is currently the most powerful U.S. rocket engine, it is dwarfed when compared to Aerojet's F1 engine for the Saturn V rocket that took astronauts to the Moon. The F1 generated a whopping 1.6 million lbf of thrust at liftoff, testing the limits of what a single combustion chamber could achieve. Additionally, both of these use liquids as their fuel, and if we remove this constraint, then Orbital ATK's solid rocket booster for the SLS is the most powerful U.S. engine as it can produce an eye watering 3.3 million lbf in thrust.