Jaguar and Land Rover are known making very luxurious vehicles. Looking back, there has been a lot of advancement in the automotive industry in last few decades but one serious problem still remains: cars have a blind spot where its pillars are. But looks like British engineers at ‘Jaguar Land Rover’ have found a solution, a new concept car with revolutionary features that tackles this problem along with this the smart car also provides and heads up display (HUD) and a navigation feature  which projects a ghost car.

This was a result of research done by Jaguar to improve the navigation of the driver; the idea was showcased on an XJ sedan. First up there is a transparent pillar system which combines cameras and display screens embedded in the pillars and makes them see through, this helps the driver by improving his visibility and protects the car from potential hazards and obstacles hidden by the otherwise solid pillars. Now for the side pillars, they are activated when the driver moves his head sideways to see a passing by vehicle the same technology helps drivers see oncoming cars in case the driver is trying to overtake or change lanes. 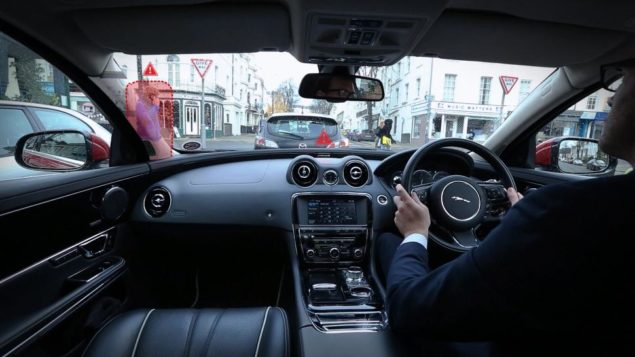 Secondly there is a ‘Follow me Ghost Car Navigation System’ and its quite similar to the one in the popular racing game Mario Kart. What basically happens is that the driver feeds information about the destination and the windscreen projects a small semi-transparent car which the driver should follow, the ghost car shows stuff like where to turn and which lane the car should be in. This is a better alternative than to listen to turn by turn directions (through satnav) or by looking at a map the conventional way. 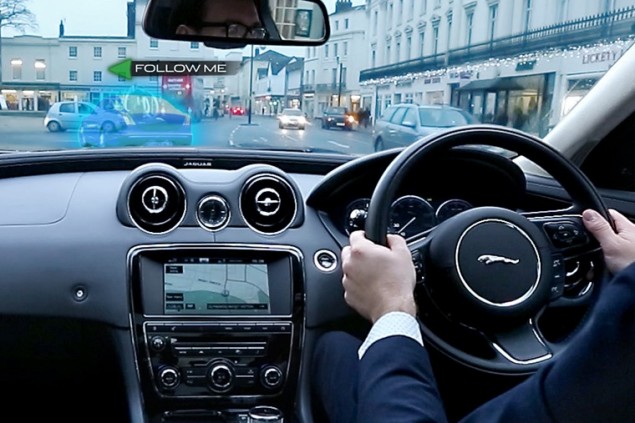 The HUD is being developed at Glasgow Caledonian University (GCU). The display detects obstacles and makes a red box around them; it will be especially useful in foggy weather. When the windscreen becomes cloud connected it can show you points of interest, gas prices, ratings of restaurants and size of parking lots etc. The ghost car navigation system is also a part of this HUD. All of this will obviously be very expensive when it first comes out but it will be very useful for drivers to see pedestrians and cyclists and the HUD will also make driving much safer and easier.

Here's a video (Credits Jaguar) to understand the concept better and a few words by Director R&D at Jaguar Land Rover UK.

"Driving on city streets can be a stressful experience," said Dr. Wolfgang Epple, Director of Research and Technology at Jaguar Land Rover in the U.K. "Imagine being able to drive across town without having to look at road signs, or be distracted trying to locate a parking space as you drive by.” ‘Our ultimate aim is to reduce road accidents and enhance the urban driving experience. ‘The Jaguar Land Rover research team is developing this technology to improve visibility and to give the driver with the right information at the right time. 'If we can keep the driver's eyes on the road ahead and present information in a non-distracting way, we can help drivers make better decisions in the most demanding and congested driving environments.'