A third-person cover based game style is finally making it to the 3DS very soon. The Gears of War inspired game, Ironfall: Invasion  is supposed to be Nintendo’s flagship third-person shooter game and should prove to be groundbreaking in how it approaches the genre on the 3DS. 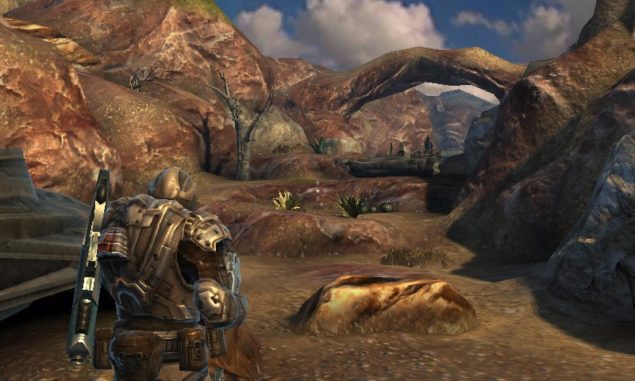 Developer VD-DEV has said that Friday February 13th with be the release date for Ironfall: Invasion, a cover-based shooter on the Nintendo 3DS.

The development team is actually a smaller one with only three people actively working on the title. But the game seems to include all of the basic elements that one can expect from a cover-based third person shooter. It will also make heavy use of the c-stick for movement and challenge the players patience as they are under fire and making decisions as to when to pop-out to take out enemies. Like other games in the genre, you can make string together actions in order to quickly move between items of cover while under fire rather fluidly.

The top screen will be used for displaying the heart pumping action while the second screen can be used to display information about your character, like health and ammo and the like. A heart rate monitor is actually used to display the relative health level in a really novel way. It actually looks quite amazing. There will also be a multiplayer mode that supports up to six players at a time. Local multiplayer will also be there, letting you battle it out, or cower in the corner, with your friends.

Being that this is a first for the 3DS, we’ll have to wait to see what the actual final build plays like before passing judgement. It is, however a fresh new idea that could help to further vitalize the already successful 3DS. This, of course, is optimized for the “new” 3DS but can certainly be played on the older models without trouble, aside from the controls being remapped to accommodate the lack of the c-stick. I wonder, then, if there are any plans for a WII U version.

I’d love to see the motion controls of the WII U being taken advantage of for a shooter, it would be most excellent I think. I know that a leaning system was integrated into Battlefield 4 when using the Kinect on the Xbox One, but I could never get it to quite work right. But Ironfall: Invasion should be interesting, and something to watch for those out there with a 3DS. It’s time to take the plunge I suppose.