iOS 12 GM build will be available for download on Wednesday. If you have been looking forward to it, here's how you can prepare your device for it. One of the most prominent features put on display at the WWDC event was Siri Shortcuts. The Siri Shortcut app is based on Workflow which Apple acquired back in 2017. It will allow users to put together multiple commands and then initiate using Siri. So there's a world of possibilities available. Now, we have come to know that it will not be available on the iPhone 6 and iPhone 6 Plus. Let's see some more details on it.

As we have mentioned earlier, Apple's Siri Shortcuts will not be coming to the iPhone 6, its bigger 6 Plus variant and even the iPhone 5s. The news was revealed as a response in an email by Apple's SVP of Software Engineering, Craig Federighi. It was revealed that a command app will not be available on older iPhone models. The executive suggested that the move was put into place because the older iPhone will experience performance issues when using the software. 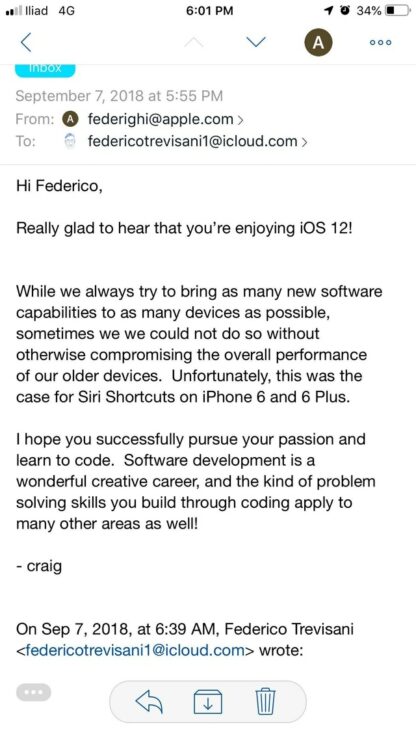 It's not like the iPhone 6 will be completely cut off from the feature, The support will be present but any AI based Shortcuts suggestions will not be available as they would on the iPhone 6s and newer models. Since iPhone 6 and 6 Plus are not receiving the complete feature, the same can be said for the iPhone 5s which also support iOS 12.

While iOS 12 beta did not feature Siri Shortcuts, the company is testing it in a separate TestFlight beta program. There will be more to the story, so be sure to stay tuned in for more details. Are you excited for iOS 12's release?

This is all for now, folks. What are your thoughts on the iOS 12 Siri Shortcuts not available on iPhone 6? Share your views with us in the comments