An introduction into Aika Global

Aika is a free to play MMORPG which is perhaps the closest thing I have found to World of Warcraft in terms of play style, characters and gameplay.

The makers of Aika have contacted us and want us to distribute free codes which give you a free in-game item which costs money so take a read and see if Aika is what you are looking for.

The give away itself will be in a couple of days but for now I made this little article to help inform you people about the game itself and what I thought of it. 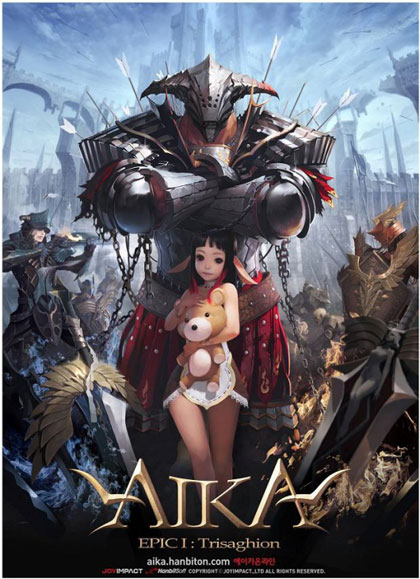 Aika is a great free to play MMORPG which recently came into my attention after receiving an email from T3Fun, the makers of the game itself asking me to help promote their game by handing out free codes of the game. I was given an account where the characters were given some advanced starting gear and other bonuses just to get an experience of the game.

We are done with a brief introduction into what the game is keep reading on for game details, how to download the game, making an account and my thoughts about the game and you can view answers to some FAQ's, see screenshots of the game and see what makes the game so special.

How to get started:

Its simple, Unlike World of Warcraft you don't need much. A simple installer from the site downloadable from HERE is more than enough to get you started, and you can see the installation steps HERE, Although it is pretty simple and straightforward  that even novice users will know what to do with little to no help from a professional.

Now you have to make your account (again it's free) by going HERE and following the instructions on the page. Once you have made your account you can login with the same user name and password on Aika's site and the game itself.

Here are my two cents:

The game is great, it feels a lot like World of Warcraft but it does have certain weaknesses; you can only choose specific classes with a specific race and there is a good level of customization you can do to your character such as hair, skin color etc.Basically all the customizations of WoW are there except for the class creation where it is pretty limited, I have attached a screen shot to show the characters / classes you can choose from when rolling a new character.

Now this is where I liked a certain feature of the game which WoW did NOT have and I feel I needed. Once you make a character you can assign it a security PIN so that anytime you enter the server with your character you have to enter the PIN to make sure that no one besides YOU is using your character and this in turn helps reduce account theft and items / money getting stolen if your account gets hacked / stolen, unfortunately 4 numbers is the limit, while I prefer 10+ character password I had to settle for using a 4 digit PIN but then again it is still pretty safe.

The graphics of the game are great for something with such low requirements, many people with integrated graphics and a good dual core can EASILY run this game on low / medium settings and even higher depending on your CPU / GPU, I have a pretty old computer but it still gave me 90+ FPS constantly with maxed out graphic settings at my maximum resolution of my monitor.The action bar at the bottom of the screen is an inversion of the bar used in World of Warcraft with game settings / community options / help etc on the left hand side and your spells / abilities on the right hand side of the screen but then again I just use the numbers instead of clicking an individual spell any way. The XP Bar is a nice touch and isn't life less like World of Warcraft, its very colorful instead of a dark blue / purple color in WoW.

Another thing I liked about the game was the fact that I can move opened menus like my character screen / inventory / map to other places on the screen by dragging them from the top like in Windows. World of Warcraft suffers from this but while its nothing major it is still a VERY NICE touch to the game for those of you who like to browse their inventory / customize their character while on an autorun / follow to a location and want to move the screens around a bit.

The combat is more or less from World of Warcraft except in WoW with the ability to move spells / ability anywhere on your action bar to a specific button and you move using WASD and strafe using Q and E and Jump with SPACE BAR, I know this isn't worth mentioning but there are certain other MMO's which have horrible controls and make you move the character using the mouse ONLY. The spell animation is great with the enemy HP showing on the top center of the screen and damage done to enemy on the main screen.

Interaction with other characters / NPC's is also pretty good, instead of clicking the characters portrait you can right click on them and interact with every character in the game. And unlike World of Warcraft all the NPCs talk in real dialogue instead of saying "Speak friend" "What do you need?" They say proper salutations and more real dialogue which is a nice addition to the game, You will get it once you jump into the game.

Unfortunately like I mentioned there are certain things I didn't like about the game, unlike World of Warcraft exploration is a BIT mor difficult, for example if I come to to say a banister less staircase and want to jump down a floor or so an invisible wall will stop me from doing so and I will only jump where I stand while in World of Warcraft I always used to Jump from the top of Thunder Bluff Windrider Master spiral to the shopping area and lose health over it. Having to walk all the way down to where I want to go even though a Jump will take away a bit of my HP but it will help me save the time of running to the MAIN entrance of said place and finding the vendor / NPC I need to see, this was a great shortcut in WoW but not putting this in the game set me back.

I think I have given an ample description of my experience of the game, I didn't get to explore dungeons, raids, battlegrounds etc due to the limited time I had with my game but so far I am enjoying the game and have already started playing actively with my friends too.

Now head to the following links to learn about:

Characters and their skills

Map of the game

All the above links will help you sink into the game and will give you an idea of what to expect and what are the best classes to your suiting,

Answers to some FAQ's you might have about the game.

Q1. What makes your MMO stand out from other MMOs?

2. Pran - Pet system where players can dress up, feed and pet them. Pran also have different personalities that can be derived from the answers to the questions that they ask their master (player). All prans are unique, there are no two prans alike. They can also buff and save their masters in times of troubles.

3. Friendly Community - Aika global boasts it's friendly and active Gm's. Since it's global, players can also expect a very diverse community where players, all coming from all over the world, may share and learn each other's culture.

Q2. I made an account for free and even logged in to the server, is the entire game free from here on or will I need to pay a fee to continue?

The game is entirely free for all level.

However, we sell tcoin (cash) items. Players are not required to buy them.

We are giving away dozens of tcoin items in events.

Currently our level cap is 70 J However, when epic 2 comes, we will have 75 as new level cap.

Q4. What are the uses of these codes and how do I activate them? What are the advantages of the code I received?

Each code that we issue is equivalent to 100 pcs of portal scrolls and 100 pcs of tears of aika.

Q5. Are you planning big changes to the game in the form of an Expansion Pack? Bringing in more classes / races / points of interest to the players?

We have plan of having major patch. We do not have specific date for it.

We will be launching epic2. Epic2 does not have new class. However, level cap increases by 5 (from 70 to 75), new dungeons, new items, and new map.

In the end I would like to say that while NOTHING can replace World of Warcraft in many categories this is still a great experience, it's free, has a large player base, has major PvP events regularly and free to play. Grab a free Code by going back here and dive into the game, if you are looking for a great free MMORPG similar to WoW this is the best you can get.