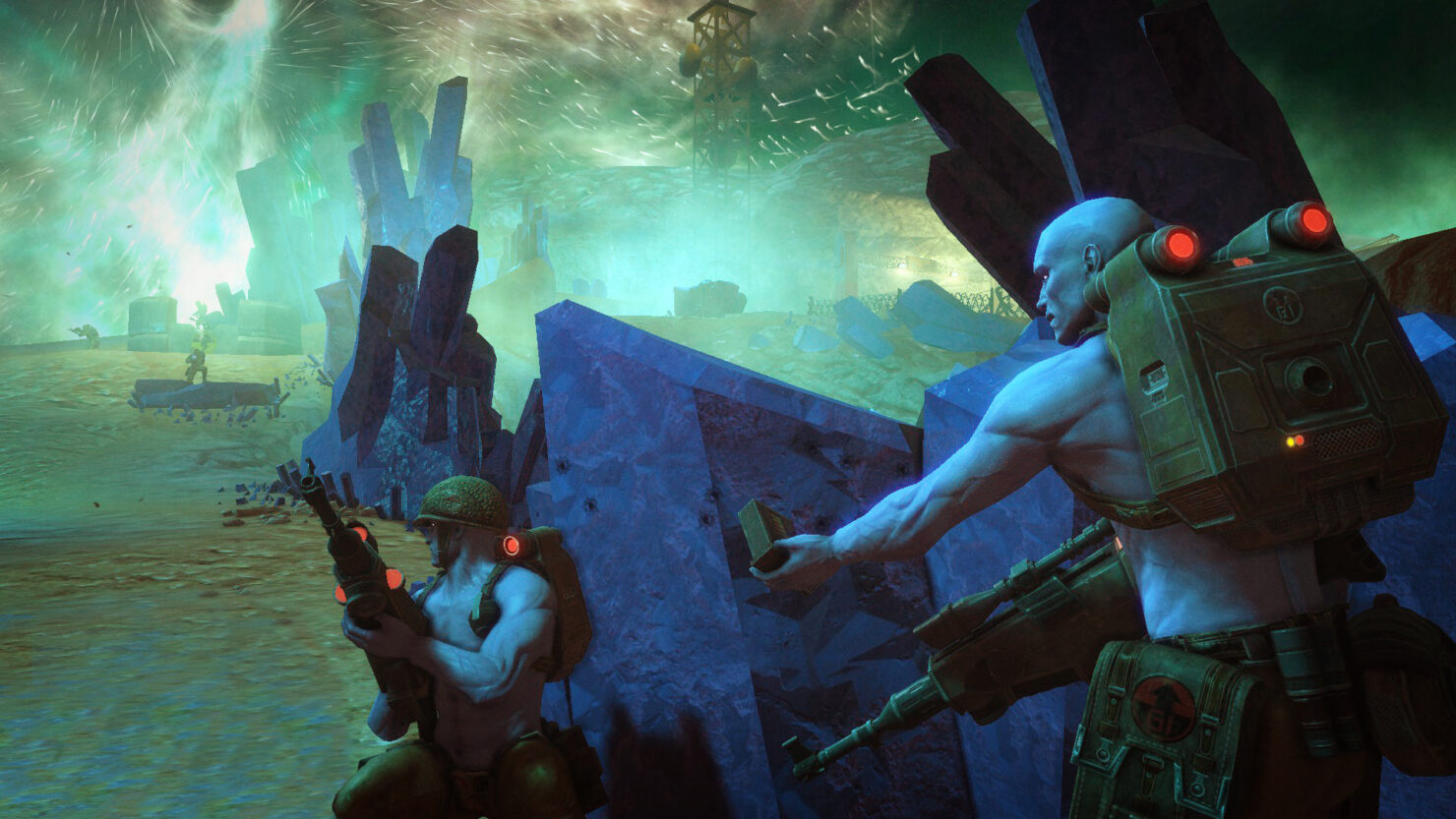 Bringing back a game that's over ten years old is no small feat. The amount of updates required to graphics, presentation and even gameplay can be mind-boggling; but the team at Rebellion didn't even flinch when they thought about bringing Rogue Trooper back for a modern audience with Rogue Trooper Redux.

The classic third person shooter is back in action, and we managed to catch up with Rich May, Lead Programmer at EGX 2017 to talk about the game, what's changed and what it's been like to jump a decade into the past and work on one of your older projects. Also, make sure to check the accompanying hands-on preview article.

So, what inspired Rebellion to bring back Rogue Trooper?

Well, I think those of us who worked on the game back in the day, we have a lot of time for it. We really enjoyed working on it, have a lot of fond memories, and we always felt the gameplay stood up well. The original game perhaps didn't get the audience we might've liked, for whatever reason, and now that we are self-funded and independent, we took the opportunity to get into our back catalog and expose those games to a new audience. Rather than just re-release an old game, we thought we'd remake the graphics so it stands up next to modern standards. And many things have been completely redone from scratch, new models, characters, textures and more. It's not gonna be up there with Call of Duty, but it'll be able to hold it's head up!

What's it like going back to a game you worked on so many years ago? Obviously, times have changed, and there's always things you might've done differently...

Yeah, I was a programmer on the original title, and it was at a point in my career where I'd finally found my feet as a programmer and I was confident about what I was doing. Now when I look back at some of the stuff I did, when programmers now ask me how aspects of the game work, I look back wondering how any of it ever worked. A weird sort of déjà vu, coupled with a "I wish I'd changed that" or "I wish it hadn't have been quite like that."

I think everyone that worked on it had a lot of fond memories and really like the game, but there are still those bits which would've been okay in 2006, but now have to be changed. Like, how the main character moves has to be changed or made to be more fluid or slick.

On the whole, the gameplay holds up pretty well, we did make a couple of changes from the original control scheme because of how the gaming landscape has changed. Back in 2006 cover shooting was quite a rare thing - we came out before Gears of War, but there were others before us. Since that time, an industry standard has developed for how you play a cover shooter, so we changed a few bits to make it more familiar to those who never played it originally. So instead of holding a button to jump into cover, now you can just stand near it to snap to it, like many other cover shooters. There's an over-the-shoulder aim mode, which wasn't in the original, which is kind of inspired by aim-down-sights mechanics, which has just become an industry staple that people expect.

There's no sprint! That's something that people have asked for...

I actually did notice that! I clicked in the stick and my character crouched...

Everyone seems to expect him to sprint, and that's probably something we would've added as well.

So there's a lot of quality of life improvements and modernizations, but is there any new content for fans of the old games to look forward to?

It is the same game as the original, so there's the same levels and same multiplayer levels. So there's no new content as such, the new stuff is in the revamped graphics and the multiplayer, which is now, of course, playable, whereas the servers for the old game were shut down. Now, we have full Steam, Xbox Live, PSN and even Switch support for online modes, so you can play multiplayer with your friends again.

That was what I was to mention next; you're bringing it to a range of platforms! Was that a decision you made early on in development, or did a console like the Nintendo Switch come along later?

The Switch came along later from what I understand. The big consoles were always going to be there, but Switch was one of those opportunities that came along after the fact and we looked into how feasible it was and, yeah, it was pretty straightforward. The guys at Tick Tock Games (UK studio porting the game to Switch) have done an amazing job of getting it ready, if not for the same day as the rest of them then very very close by.

How far away is launch now?

The launch is 17th of October for PlayStation, Xbox One and PC, with Switch still TBC but should be very soon after.

How long will this have been in development for now?

For Rogue Trooper Redux, I think it's been about a year, as I understand it?

Is that a fairly quick turnover for this sort of update to a game?

Yeah, I think so. Like I said, graphics are brand new, and first stages to that was getting the engine and UI to work well with those and bringing those assets and code into the modern era. You can't just get those things and make a new game again mind, it takes a lot of effort.

Anything else about Rogue Trooper Redux you want to share or excites you?

I hope players will really enjoy it. I've always really enjoyed it, and some of the later levels where you set up traps and ambushes - you can't see it in this demo - some of those cool moments where you make and execute a plan just feels like really good fun, really enjoyable.