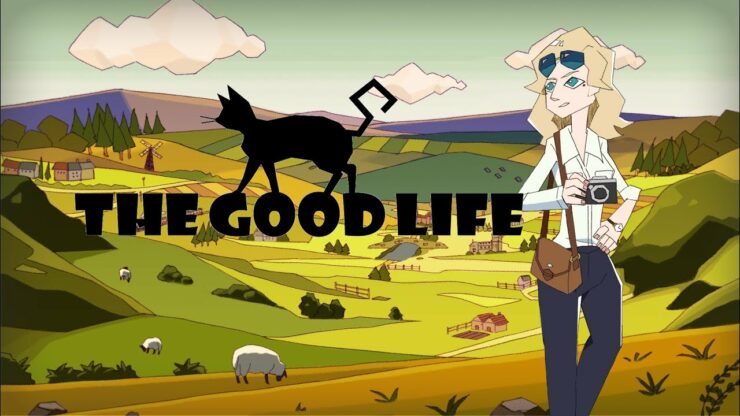 If Hidetaka SWERY Suehiro is known for anything, it's likely for being eccentric. The Japanese game developer has been working in the industry for years, and across unique games like D4: Dark Dreams Don't Die, The Missing and Deadly Premonition, he has changed the way many people approach games, and broken away from strict genres, preferring to follow his own ideas and inspirations.

I managed to catch up to Suehiro-san and his translator during Reboot Develop Blue 2019 in Dubrovnik, Croatia. Sat is an echo chamber of a white room, it was striking how bold and full of personality the man is, compared to the clinical room we were sat in.

Good natured and well humored, Suehiro-san was more than happy to give me the time to talk about his new game, The Good Life, as well as his views on the Japanese game industry and much more. He was personable and a little shy, but incredibly warm and inviting. You can read our full interview below.

Suehiro-san, can you tell us about your latest project, The Good Life, and some of the inspirations behind it?

Hidetaka SWERY Suehiro: The Good Life is about a photographer from New York named Naomi, who incurs a massive debt, and in order to pay off that debt, she travels to Rainy Woods, which is a small country town in England, also known as the happiest town in the world. And there she works, takes on jobs, takes photos, basically lives her life there.

There's a special secret in town, at a certain time all the inhabitants turn into either dogs or cats. And Naomi undergoes that transformation herself as well. What are you trying to do with the game is basically making an adult picture book.

What motivates you to come up with these strange ideas, like transforming into animals? I think from your past projects many people know you as being quite eccentric. Would you say that you are an eccentric creator?

HS: What something people always say to me is that he's very happy on the surface, but deep down there's a darker side to me, and they're not really sure what is true form really is.

I've always wanted to see more of D4: Dark Dreams Don't Die, and I know that's a long dead project, but when something goes wrong in a project like that and you can't continue it, is it upsetting or dispiriting?

HS: When there are those sorts of decisions, where you just know the project won't continue, I just move immediately on to the next. I do feel bad that D4 can't continue. Especially because I don't have a copyright to any of it. And you know, I wrote scripts for the continuation but they were all passed over to the previous company.

Back on to The Good Life, why have you decided to set this in England as opposed to somewhere like Japan?

HS: The origin of The Good Life is a very old story. Back in 2006 or 2007 when I was working on Deadly Premonition, my producer went to England, and he said that he was going to England and he's going to come back in two months. He ended up staying there for four years. And in the beginning you know he was complaining about all the cultural differences in England, but by the time he came back he was saying things like 'Oh, I wish I could drink some Guinness right now.'

Basically, he'd come to like the place he was in for four years. So I'm sorry, I'm always going to write a story about one person's sensibilities and what they like, showing that change, and transformation, and I'm trying to put the essence of that into The Good Life, but also just to show the great things about British culture.

Have you been to England yourself?

HS: Yes, I've been to England several times. In October of last year, he went to do research in the Lake District. I went to Windermere and went into a local pub and made some friends.

Yes. That is definitely an English pub. Wonderful. As an Englishman myself, I am looking forward to seeing your rendition of English villages. It's always interesting seeing your culture represented by someone else.

HS: First comes little things like food menus, I really want to make sure I get them right, so I'm gonna ask British friends to check on the little details.

Tell me about White Owls studio. What is your new studio like? How has it come to be?

HS: So in 2015, I got sick and stopped working on games for a year and just quit the game industry. During that time, he came to Reboot Develop for the first time and talked to a lot of creators and friends just about how to make games, work style, because video games are really inspiring. So I thought long and hard about it. And then I got better. I decided to quit my old company. One big thing was talking to Tim Schafer. And he was saying the state of the Japanese gaming industry was really bad, and I'm racking my brain about what I can do to fix it. And Tim just replied; 'Well, just think about yourself what you can do for yourself.'

How do you think the Japanese games industry has changed in the last few years? I know a lot of journalists in the West think that Japan is having a second revival of the gaming industry, because of so many strong titles coming from publishers like Capcom, and many others. What do you think of the current state?

HS: This is the result of what Japanese creators have been doing for the past five years, which is realizing that they were starting to lose their status in comparison to the West. The Japanese market, people in general populace didn't realize that. The creators did. So they really started studying the new methodology for games, utilizing the West and that's finally starting to come to fruition.

I've noticed that a lot more Japanese games are being made with outside engines, for example, Unreal Engine is getting popular among many Japanese game studios, which once upon a time, there was mainly proprietary engines and in-house stuff. Do you think that has helped?

HS: Yeah, so that tends to be a thing in the Japanese game industry, where you want to make this exclusive tech and then hide it for yourself, then you get the advantage ultimately. But these engines that you're speaking of, they started to become the big thing. So there was no more point in hiding your tech, you had to catch up with the rest of the world. So that's why creators switched over to other engines.

HS: In my most recent game, The Missing, I really challenged myself to make the game first and then think about the story, more than I have ever done before. And with The Good Life, I'm going to take that approach and evolve even further. Make a gameplay focused game which may sound strange to you, but basically what I mean is that the gameplay is going to be the ultimate factor that pushes the players. Of course, there will be the atmosphere, the weird characters, the horror, erotic things that you expect from a SWERY game, but that's all going to be added later.

So the protagonist is a photographer. Is that going to be the main mechanic?

HS: Yeah, so you're going to use photos that basically turn into money in the game. And there are various ways to do this. One way is to take special photo requests from people. The other way is to check the computer in the morning and see what the trends are and current trends. And if you take a photo that fits the trend, you can upload it onto Flamingo, which is the in-game messaging board. And the more likes you get, the more rewards and money you make. I don't want the photo taking to turn to busy work. So the hashtags will act like hints, rather than like, go take a specific picture. So the hashtag might be something like sadness, or red flag, and you have to go out and explore and figure that out.

I am looking forward to seeing how these dark themes get woven into this seemingly very happy scenario...

HS: So this is the first time I've ever revealed this to the world. But this game is about paying off your debt, and the happiest town in the world. So the theme of the entire game will be the relationship between money and happiness.

Are there any conclusions that you have come to that are going to be in the game?

HS: Philosophers throughout history have written pages and pages about how people work. You know, they toil and struggle and suffer all for the sake of wealth, because they think wealth brings happiness. The question is, well, does wealth really bring happiness? It might! So I want to play with everything.

You already mentioned that there might be a sad person in the town you can take a photo of, does that mean this person doesn't have any money?

HS: So the idea for the gameplay we will update, so the sad person, this person could be a person on a poster, it doesn't necessarily have to be a real person. I want people to think outside the box.

Is there anything else about The Good Life that you can tell me that you think I should know?

HS: It's still ongoing, of course, and The Good Life is a Kickstarted project. So there's never going to be a time when the backers don't get the info first. That's the nature of Kickstarter, but we're working very hard on it, May will be the first year anniversary of when the development started, and I realize that it's coming up on that time, we're going to have to show something new.

So hopefully, in the next few months, we'll see more from the game?

I caught up with Suehiro-san outside of the conference later on, without his translator, and despite not being the most adept at spoken English was still warm and seemed eager to do his best to talk with me, and meet up with his friends for a few drinks. A gentleman, as well as a closet party animal. The Good Life is still in development, and we'll have more on the game and Hidetaka Suehiro in the future, so keep reading Wccftech.