Deadly Premonition 2: A Blessing in Disguise

Provided you’re in the right mood, there are few things more entertaining as a truly terrible movie, TV show, or book, but the same can’t really be said about video games. You can probably count the number of worthwhile “so bad, they’re good” games on a single hand. Most of the time when a game is bad, it’s just…bad. You can’t sit back and passively immerse yourself in a game’s lousiness, you actually have to play the damn thing, which tends to ruin the fun. An exception to this rule was 2010’s Deadly Premonition, which combined off-the-wall characters and writing, some genuinely creepy atmosphere, and passably entertaining gameplay in just the right balance to become a legit cult classic.

Well, a little over a decade later, Hidetaka “Swery” Suehiro has returned for a second cup of coffee with Deadly Premonition 2: A Blessing in Disguise. Of course, there’s a reason nobody talks about any of the movies Tommy Wiseau has made following the unexpected success of The Room -- recapturing lightning in a bottle is no easy task. So, does Deadly Premonition 2 brew up another delicious pot of weirdness or has the series gone bitter with age? Time to investigate…

In properly confusing fashion, Deadly Premonition 2: A Blessing Disguise is both a sequel and prequel. The game opens in 2019 with Francis “Zach” Morgan being interviewed by FBI agents about a missing person case that’s seemingly tied to series of murders his alter-ego Francis “York” Morgan investigated in 2005 in the quaint Louisiana town of Le Carré (the events of the original Deadly Premonition likely happened sometime in 2006). While the Southern setting is new, the Le Carré case mirrors the one from the first DP in a number of ways – a young girl named Lise Clarkson is killed, mutilated, and posed in a ritualistic way. Mysterious red seeds are also found near her body. The Clarksons are a shady bunch that rule Le Carré with an iron fist, but it seems somebody’s out to air their dirty laundry and sever the family tree, and it’s up to you to find out what’s going on.

Without giving anything away, it isn’t just Deadly Premonition 2’s setup that feels familiar. While there are certainly tweaks to the formula, the entire mystery follows similar beats, even before the more explicit ties to the original Deadly Premonition are made clear. Even the game’s big “shocking” moments feel like repeats to some degree, with the treatment of a certain marginalized character feeling particularly outdated. Not that I expected a pulpy story like this to be tasteful, but other recent Swery games such as The Missing have offered more nuanced and interesting representation. I’m being somewhat vague here to avoid spoilers, but I was surprised certain subjects weren’t treated with more care here in 2020.

Ultimately though, the main thing holding back Deadly Premonition 2’s story is the lack of atmosphere. Inspired by Twin Peaks, the original DP maintained a constant low-level tension that kept you off balance and made the weird stuff hit harder. That’s totally gone, as everything is bright and cheerfully wacky this time around. Agent York has also had his rough edges sanded off – sure, he was funny in the original game, but he could also be kind of a creepy jerk. In DP2, York is given a kid sidekick, rides around town on a skateboard, and is always cartoonishly upbeat. York chatting with Zach within his own head and launching into various bizarre rants is still amusing, but he’s not as genuinely unpredictable as he was before. He’s purely a comedy character now.

Deadly Premonition 2 definitely feels like it’s trying a touch too hard at times. The original game certainly had its share of quirky characters, but there were also at least a few normal people kicking around as well. This time around almost everyone is an aggressive nutjob or an over-the-top stereotype (some of the latter verge on being a bit questionable). Don’t get me wrong, the game did succeed in making me laugh a number of times – York’s spiel about being terrified by Ghostbusters and the interludes between chapters featuring a guy sensually playing saxophone in his tighty-whities are standout moments – but the relentless silliness gets to be a bit much. Nothing leaves as much of an impression as, say, the infamous skull story York tells in the diner in the original game, because there are fewer changes of tone in DP2. Eventually, the kooky stuff York says just starts to feel kind of mundane.

Deadly Premonition 2’s lack of atmosphere definitely extends to its visuals. The original DP wasn’t a visual masterpiece, but I preferred it’s gloomy, misty look to the sunny cell-shaded graphics of the sequel. At least the characters’ mouths are properly synced to the dialogue now. Despite not exactly being a looker, DP2 suffers from some severe technical issues – expect slideshow-like performance and awful stuttering when running around the open world or fighting a large group of enemies.

Performance issues, combined with frequent, lengthy load times, really kill the fun of exploring Le Carré, which is a shame, because the map is fairly well-designed and includes the expected array of minigames (rock skipping, skateboarding runs, etc.) Open-world mission quality definitely takes a hit as well, with many of Deadly Premonition 2’s main story missions being less interesting than the side missions from the first game. Granted, there is some variety, as you may find yourself having out-bowl an old lady or chase a mysterious dog in order to progress the story, but there’s also plenty of dull “collect X squirrel tails” and “search the town for some random item” type missions.

The weird sim stuff that requires you to periodically eat, shave and change your clothes returns, and it’s still largely superfluous. Some of the new sim elements aren’t particularly well thought out – York can now get BO if he doesn’t bathe, but you can’t do so until you fix your shower by completing a poorly-explained sidequest. Since I was rushing a bit to complete the game, I never bothered to finish the shower sidequest, and so I spent a good chunk of DP2, including important cutscenes, with a literal cloud of flies buzzing around me. Admittedly, that was kind of amusing at first, but the novelty wore off pretty quickly. “Funny at first, but eventually kind of annoying” sums up the Deadly Premonition 2 experience pretty well.

So, most of the stuff Deadly Premonition did well (atmosphere, characters, open world) isn’t as good in the sequel, but what about the thing the original definitely didn’t nail – the action scenes? Well, I’m sorry to say they also aren’t as good. As before, you’ll occasionally have to enter a dark alternate dimension where you shoot enemies from a Resident-Evil-style over-the-shoulder perspective, but everything just feels slower and more awkward this time around. All the dungeons you battle through look the same, and the genuinely freaky enemies of the first Deadly Premonition have been replaced by repetitive baddies that look like they’ve been ripped from some second-rate RPG. These action sequences aren’t even remotely challenging, they’re just dull. Worst of all, there’s no equivalent of the “Raincoat Killer” in this game. In the original DP, the Raincoat Killer constantly stalked you, popping up at inopportune times and providing some real scares, and the absence of anything similar in this game is a real blow.

Deadly Premonition 2 took me around 15 hours to complete, and I’ll admit, I gobbled up the game in around three days without too much indigestion. Honestly, my experience wasn’t terrible, but by the time I hit the credits my desire for more Deadly Premonition had largely expired.

This review was based on a Nintendo Switch copy of Deadly Premonition 2: A Blessing in Disguise provided by publisher Rising Star Games. You can pre-order the game now via GameStop. 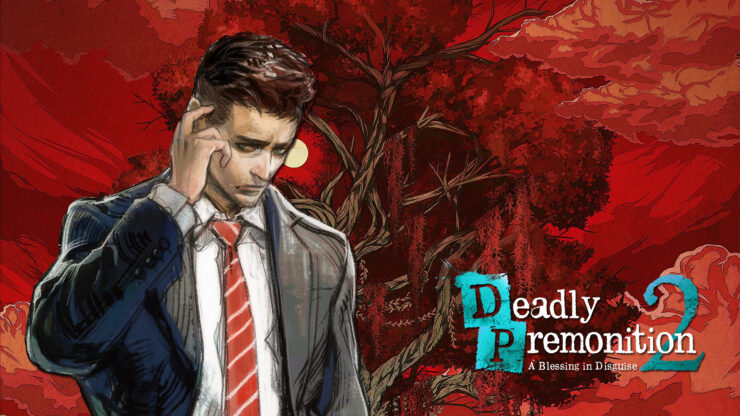 Deadly Premonition 2: A Blessing in Disguise is as bonkers as you’d expect and fans will no doubt enjoy catching up with Agent York, but a lack of atmosphere, dull action, serious technical issues, and the creeping sense that Swery is becoming a touch too self-aware conspire to kill the fun. Deadly Premonition 2 is for the hardcores – most other folks can safely close their investigation after finishing the first game.

The Legend of Zelda: Tears of the Kingdom is the Official BOTW 2 Title, Game Drops May 2023