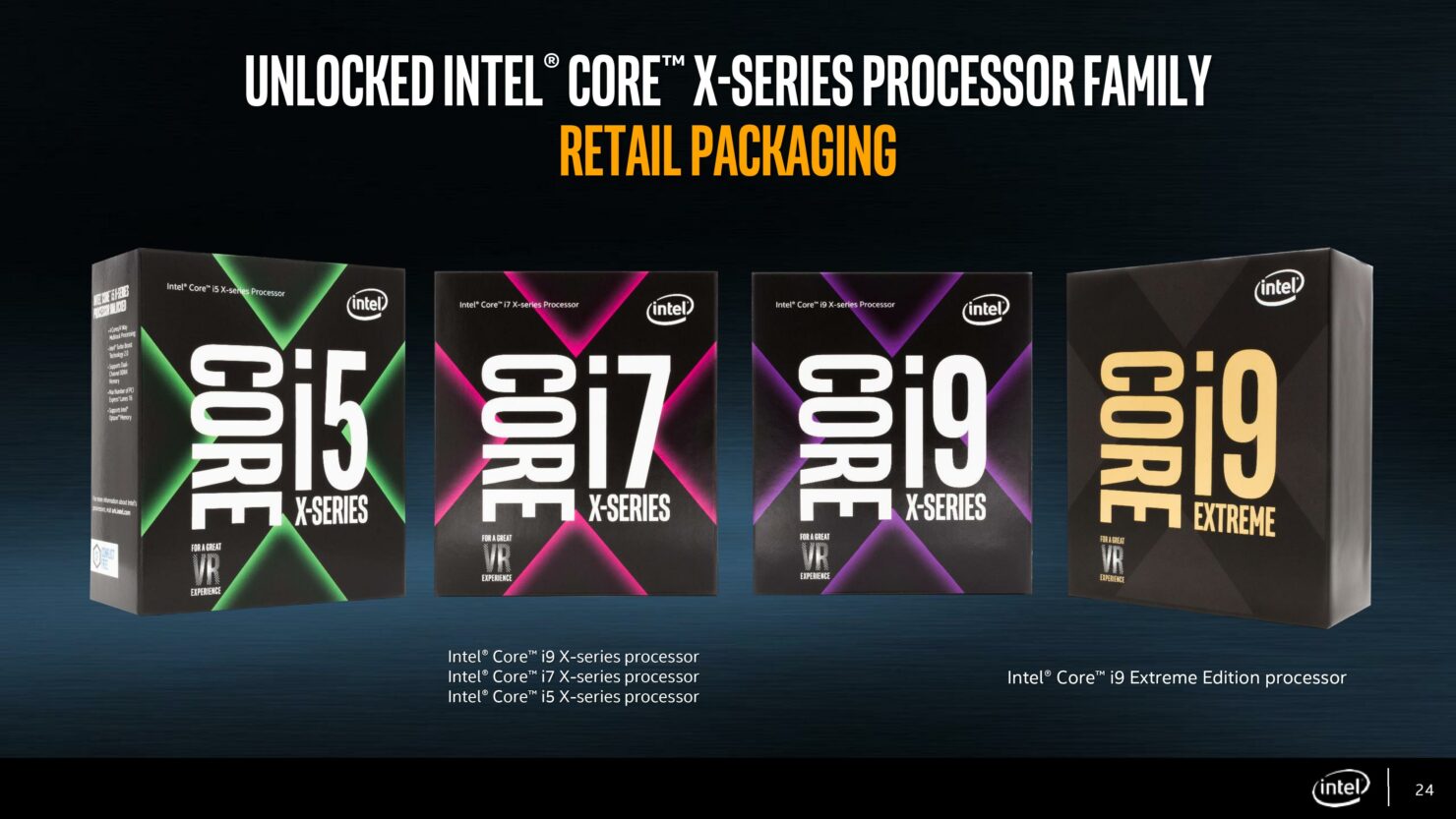 The new lineup in its entirety will be compatible with the company's new LGA 2066 socket and X299 chipset. For more details regarding Intel's new enthusiast platform make sure to check out our Computex coverage here.  For a quick recap of the lineup take a look at the table below.

Intel's High Core Count Parts To See Delayed Availability, 18 Core i9 7980XE CPU Said To Be MIA Until Next Year

Intel's new platform is the very first to feature CPU bifurcation where we'll see SKUs based on different processor generations launch on the same socket. The Kaby Lake X lineup will be based on the same quadcore Silicon that's been available on the LGA 1151 socket since last year and will only offer slightly higher clock speeds.

The Skylake-X parts are where things get a little bit more interesting. Here Intel is again bifurcating its lineup by limiting PCIe Gen3 lanes on its Skylake i7 parts to 28 instead of 44. The Skylake-X chips also differ in other ways, perhaps most peculiar is the fact that Intel will actually be leveraging two different CPU dies for this lineup. An LCC (Low Core Count) die and an HCC (High Core Count) die. The LCC die maxes out at 12 cores, while the HCC die maxes out at 18 cores.

All Skylake-X parts based on the HCC die will see delayed availability Intel has told the press at Computex. When exactly they're going to be available Intel hasn't announced just yet. Although it appears that these parts will actually see a very significant delay. An Asus representative has revealed that Intel's 18 core CPU won't be available until next year.

Just one day after Intel announced its Core X series and X299 chipset AMD came out with its own announcement of enthusiast Threadripper processors and X399 chipset. As you can clearly tell from the name AMD has chosen for its chipset, it's hell bent on one-upping Intel in the high-end desktop.

To add insult to Injury AMD announced that all of its Threadripper processors will feature 64 PCIe Gen3 lanes and quad channel DDR4 memory support. A clear dig at the fact that Intel's Kaby Lake Core X series parts will be limited to dual channel DDR4 and 16 PCIe lanes and mid-range Core i7 Skylake-X parts being limited to 28 PCIe lanes rather than 44 like the higher end i9 parts.

It doesn't take a genius to realize that Intel had always intended to continue its incrementalism had it got the chance. To date and for the past decade we had only seen Intel leverage its LCC dies for its high-end desktop platform. The fact that the company is going to be leveraging an HCC Xeon die for its high-end desktop platform for the first time, nearly doubling the core count of its flagship CPU after years of incrementalism, speaks volumes. And the fact that these parts will see delayed availability tells us Intel was caught off guard and was clearly not ready for AMD's Threadripper surprise.

AMD announced that the Threadripper lineup in its entirety and X399 motherboards will be available this summer. Assuming AMD plays its cards right in terms of pricing the company could steal a big chunk of Intel's high-end desktop revenue until its high core count parts are released. At which point we could see AMD counter again. Ever since AMD's Ryzen launch earlier this year we've seen the CPU landscape get more fascinating by the minute and it doesn't look like it's going to stop any time soon.