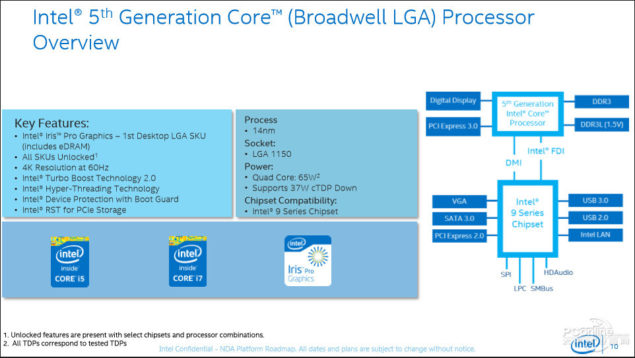 One of the interesting features of Broadwell nomenclature is the fact that the unlocked multiplier will be featured in "C" series processors - which constitute the flagship i5 and i7 respectively. Broadwell is available in a multitude of flavors, including Broadwell Y (aka Core M), Broadwell-HQ and Broadwell-U. Desktop will see 5th generation processors in either the LGA or BGA packaging. BGA is ofcourse soldered packaging while LGA, specifically LGA 1150, is the one enthusiasts will bee interested in.

The Intel Broadwell Core i5-5675 and Core i7-5775 will have TDP of exactly 65W - something that is expected to increase with Skylake processors. Broadwell will also be the last generation of processors to house the FIVR (fully integrated voltage regulator); something that is going to change from SKL SKUs. One of the biggest changes perhaps is the inclusion of eDRAM on die to boost the integrated Iris Pro 6200 graphics - a form of HBM basically (upto 128MB of eDRAM is what our readers can expect on the mainstream SKUs). So expect a very big integrated graphic performance jump with the arrival of Broadwell SKUs.

The processors utilize the LGA 1150 socket and will be compatible with Intel's Z97 board, keeping the market engaged before the 100-Series chipset arrives with Skylake. Broadwell based Stock Keeping Units have already started listing at various OEMs and reports, including pictures are coming from all over the interweb. What remains to be seen however, is the mysterious use of the "C" nomenclature (usually reserved for embedding applications) and whether these processors will see the light of the day at retailers in stand along SKUs (processors only as opposed to a full pre-built PC by an OEM). Given below are the pictures and specifications of Intel's 14nm, 5th Generation, Broadwell Processors: