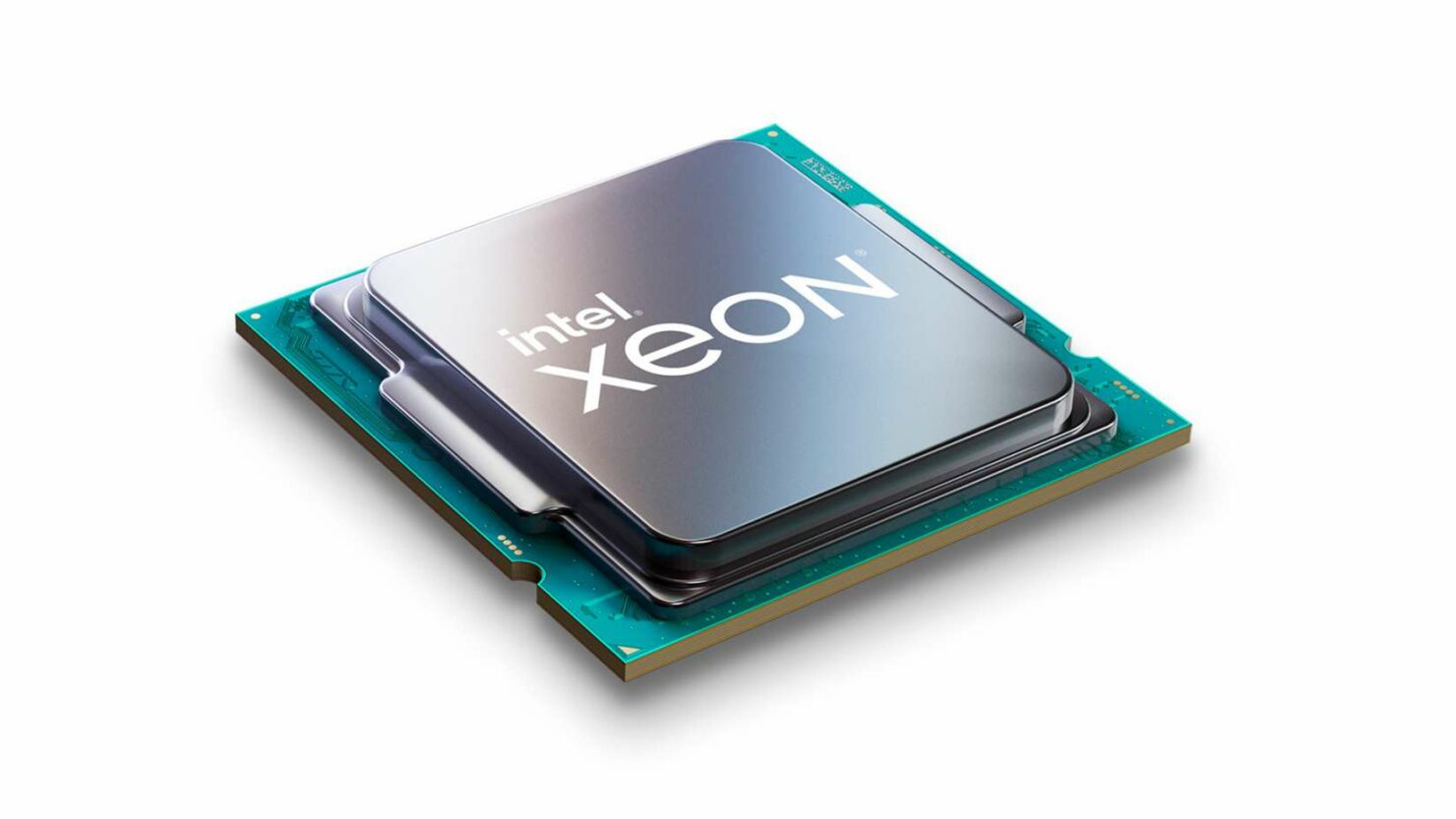 It appears we are seeing the release of the new Intel Xeon E-2300 Processors, also codenamed Rocket Lake-E. Intel's Xeon E-2300 utilizes four to eight cores, but not anything higher like previous-gen desktop processors. It is also lacking dual-core variants which seemed to be the standard. But, where we lose those options, we gain support for Intel SGX, allowing for up to 512MBs on a smaller size.

Intel Xeon E-2300 processors offer 10 new processor varieties, including options with 4, 6, or 8 cores, and thermal design points (TDPs) ranging from 65W up to 95W. With Intel Turbo Boost Technology frequencies as high as 5.1 GHz, and memory speeds up to 23 percent faster than the prior generation, these new processors outperform the prior Intel Xeon E processor by up to 17 percent.

And when coupled with Intel C250 Series Chipsets, this platform offers more I/O bandwidth and speed across options including new PCIe 4.0, more lanes of PCIe 3.0, USB 3.2 with new 2x2 (20 Gb), and SATA 3.0 support. This platform is also validated for compatibility with the latest server operating systems, including Windows Server 2022.

This new Intel Xeon E-2300 is not a consumer or enterprise-level series. It is set for more server-based options, such as digital displays for small businesses, local web hosting, or higher-speed connectivity to local NAS setups. 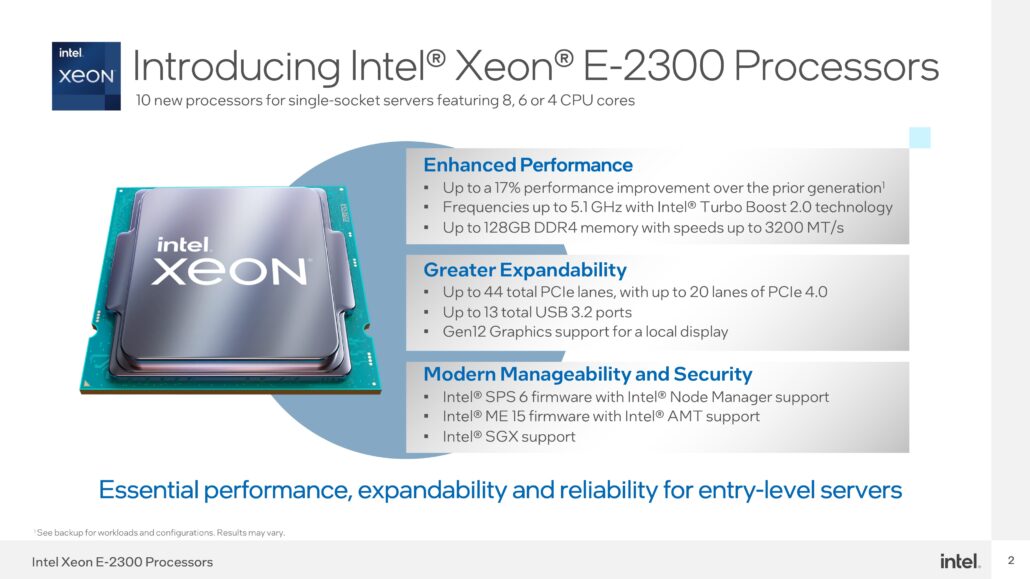 The Intel Xeon E-2300 lineup is based around the Tatlow platform which replaces the older Juniper Pass platform. The main difference between the two is the socket type which has been updated to LGA 1200 on Tatlow to support the brand new processors whereas the Juniper Pass platform only supports older LGA 1151 chips. The Tatlow platform also offers increased DDR4 speeds, more SATA ports, increased M.2 slots, and Gen 4 capabilities. These CPUs aren't a replacement for the existing Xeon E-1300 lineup which is supported on the W480 mainstream workstation platform. 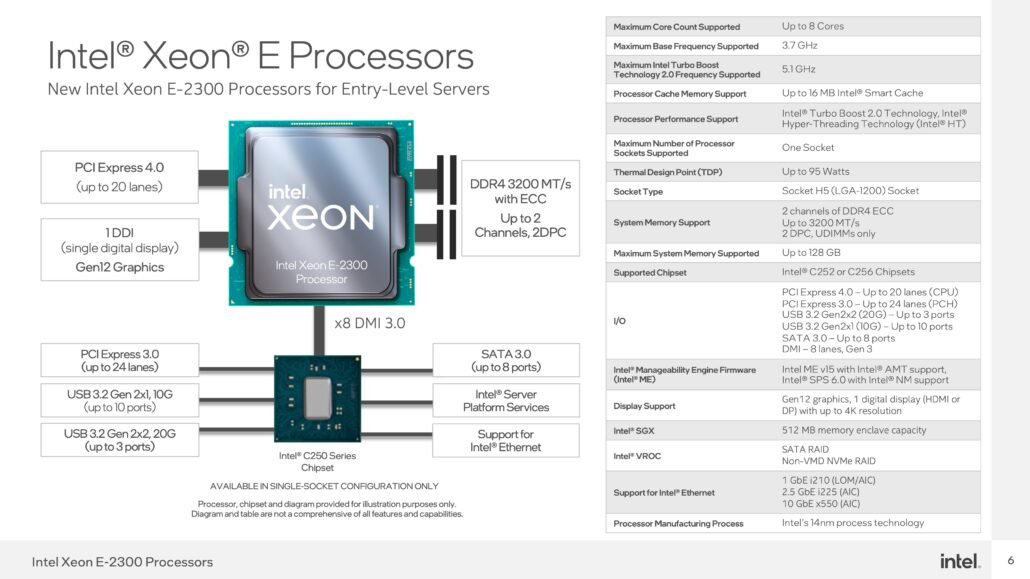 The Intel Xeon E-2300 uses DDR4-3200 ECC memory for up to 128GB, using up to 4-32GBDIMM memory. It has an LGA1200 socket, up to 17% increased performance based on previous-gen processors, 65-95 watt TDP, PCIe Gen4 CPU, and PCIe Gen3 PCH connections, and a larger focus on Ethernet strength for network builds utilizing an add-in-card. Previous versions would utilize more wireless connectivity, which can fluctuate more than going directly through the Ethernet. 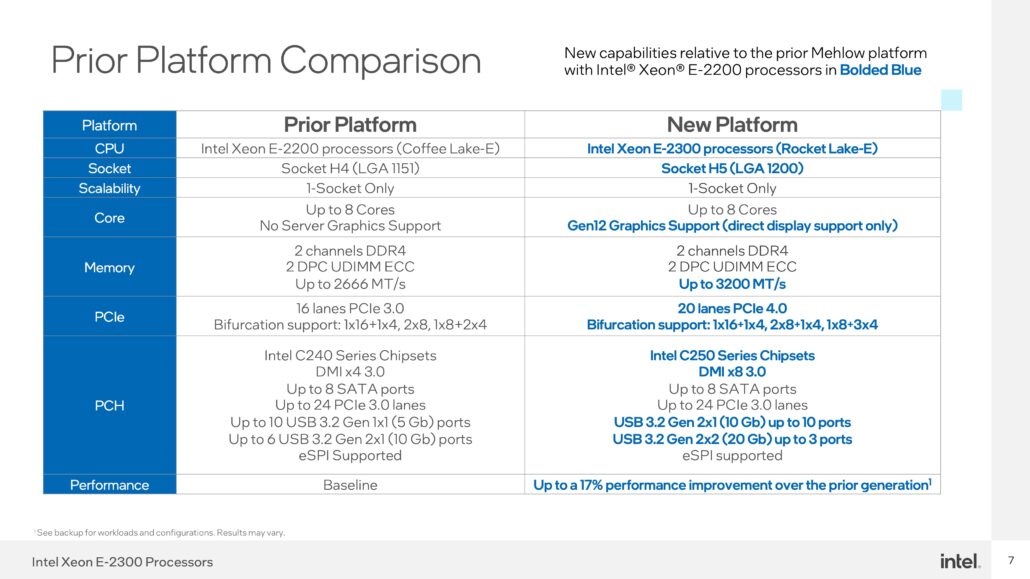 As for the CPU lineup, the Intel Xeon E-2300 stack is composed of 10 chips which are based on the 14nm Cypress Cove architecture, the same one featured on the 11th Gen Rocket Lake CPUs. These chips are segmented into two SKU stacks, one with integrated graphics and the other without. Intel seems to be offering 8 core, 6 core, & also 4 core SKUs within its lineup. The 4 core parts have been missing from the standard Core & Xeon Rocket Lake consumer platforms and this is the first time I have seen them listed. Intel did launch quad-core SKUs for the LGA 1200 socket but they were built on the older 14nm Skylake architecture (Comet Lake Refresh). 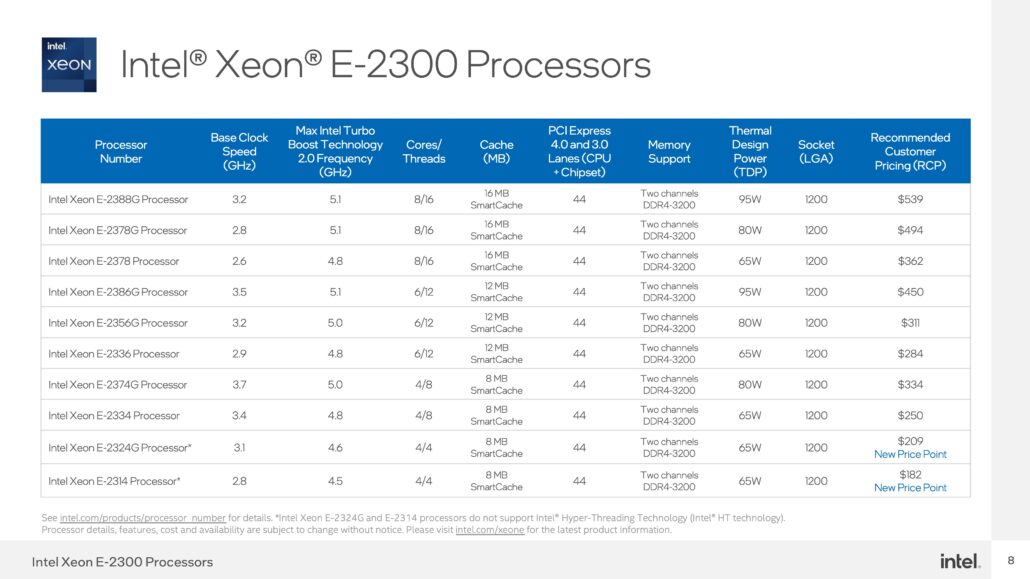 The chips mentioned above feature the 'G' moniker and that's for integrated graphics support. The Xeon E-2300 lineup rocks the Intel Iris UHD 750/730 graphics chip. As for the remaining SKUs, they are listed in the table below: