Coolaler Forums have posted benchmarks of Intel's Westmere-EP Xeon Processors which were demonstrated on EVGA's SR-2 Motherboard which is equipped with Dual LGA1366 Sockets. The CPU's tested include Xeon X5670, Xeon X5640 and Xeon E5630.

A score equivalent of 20 Points in CineBench is terrific for this chips. Another member demonstrated the other two chips Xeon X5640 and Xeon X 5630 stability but didn't provide any benchmark results.

First were two X5640 chips, The CPU-z shows it was an Engineering Sample which runs at stock 2.27Ghz, Featuring 6 Cores 12 Thread and a 80W TDP. The Chips were overclocked beyond 4.3Ghz and stability was tested by running Linux and a Folding Client for a few hours.

The E5630 on the other hand or E5649 Reported by CPU-z is a 2.53 Ghz Stock clocked chip featuring same specifications as X5640 and was overclocked to 4Ghz Stable.

In other news, Renowned engineering sample leaker JCornell posted a Screenshot over at Coolaler Forums showing the C0 Revision of Intel's Upcoming Sandy Bridge-EP Xeon Based Processor which runs at a stock clock of 2.20Ghz featuring 20MB's of L3 Cache featuring 8 Cores and 16 Threads with a TDP of 80W. Do check the pic below along with other cool news on Intel's Sandy Bridge-E /EP Processors: 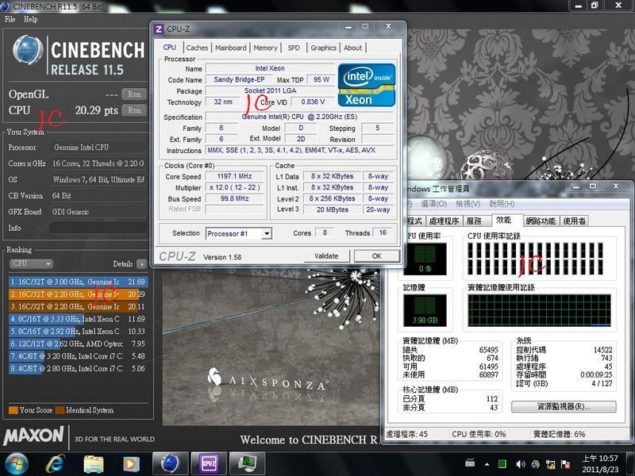