Intel has officially unleashed their latest SSD 750 series solid-state drives meant to push storage drive speeds on the consumer front by harnessing the NVMe (Express) and PCI-e 3.0 standard. The latest SSDs from Intel are focused towards enthusiasts and high-performance users demanding consistent performance and high transfer rates with added reliability, all three of which are handled quite well by the SSD 750 series drives. 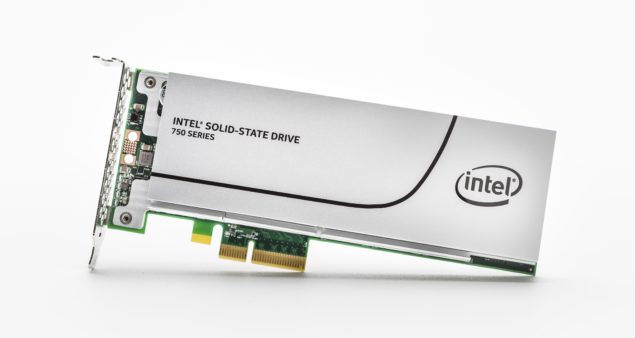 Starting with the specifications, the SSD 750 Series will be available in two form factors, the standard 2.5" bay drive which features the SFF-8639 connector cable to boot up while the second option is an add-in-card which fits into a half-length PCI-e slot. Since the motherboards don't officially yet provide connectivity to the latest SFF standards which Intel is using on their latest SSD 750 series drives, they do bundle two connector cables with the 2.5" variants that include an SFF-8639 to SFF-8643 (mini SAS) and SFF-8643 to M.2/SATA power cable. Since Z97 and X99 series of motherboards from AIBs do come with M.2 interface slots, the drives will easily be compatible with the current and upcoming generation of motherboards however most M.2 are Gen 2 x2 and to gain full potential of the SSD drives, its advised to equip them to a Ultra M.2 interface slot which are capable of x4 PCI-e Gen 3 speeds.

It is expected that Intel may launch various capacity variants of the SSD 750 series family in the future. Prices of the current models are $389 for either form-factor 400 GB variant and $1029 US for the 1.2 TB variants. All SSD are backed by a 5-Year warranty period. Review of the SSD 750 series have proven to be exceptionally well with the drives performing as expected. Some of the reviews can be found in the round-up below: