The Intel Skylake processors are going to be unveiled on 5th August at Gamescom, which is just a few weeks away. We have come here to see several leaks on Skylake, regarding the variants, the SKUs, the platform and even seen some benchmarks already in which the Core i7-6700K is being compared to the Core i7-4790K. The Skylake generation of processors are going to boost the CPU and GPU performance further and incorporate new features which we are going to talk today.

With Skylake, Intel is going nuts with the graphics performance as indicated in the slides posted by FanlessTech. The slides which are part of the final Skylake deck indicate several new things and some things which we know about already. Starting off with the comparisons that are made between Skylake and Broadwell. We know that Skylake and Broadwell are based on the new 14nm process from Intel. The difference is that Broadwell is a Tick (Smaller Process Technology) while Skylake is a Tock (New CPU/GPU Architecture on the same process). Now it is known that Intel is going to increase the time-frame of their tick-tock cycle from two years to three years due to delay in the manufacturing of smaller nodes (post 14nm) and we will see a third Tock in the form of the 7th generation Kaby Lake in 2017. Now Kaby Lake won't be a completely new architecture but will deliver key tech improvements in departments such as Power efficiency and GPU performance before Intel moves to the 10nm process node.

So back to the differences, compared to Broadwell which brought a 5.5% IPC increase over Haswell and built on a 14nm process, Skylake will deliver 10-20% better CPU performance in both single and multi-threaded loads in any given application. When comparing overall SKUs and not just the desktop parts, Skylake will do so with low power demand compared to Broadwell. On the graphics front, Intel is updating to a Gen 9 iGPU which is going to include graphics chips up to the GT4e on Skylake-H and eDRAM integrated Skylake-U series. Intel is saying to expect a 50% better 3D Gaming performance on Skylake parts (45W GT4e vs 5th gen 28W GT3 and 47W GT3e). The battery life on Skylake improves from 8.5 hours to 11.3 hours which is a 30% increase and several new I/O features are added on the devices such as eMMC 5.0, SDXC 3.0, PCIE Gen3, CSI2, USB OTG. In terms of media focused improvements, Intel has integrated a HEVC devode/encode engine that delivers faster and ultra HD quality media transcode. There are also updates to the voice, camera and touch/sense features that are listed in the slides. Overall, the main features include: 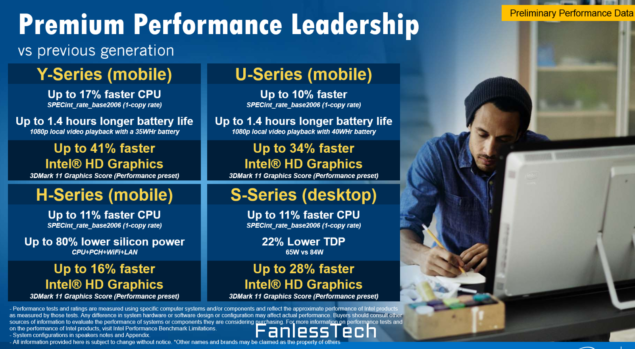 The second news comes straight from Coolaler Forums who have achieved a 3.8 GHz overclock on DDR4 DIMMs with a Skylake Core i7-6700K processor. The result of this overclock can be seen in the bandwidth scores shown inside the AIDA64 cache and memory benchmark which are impressive. 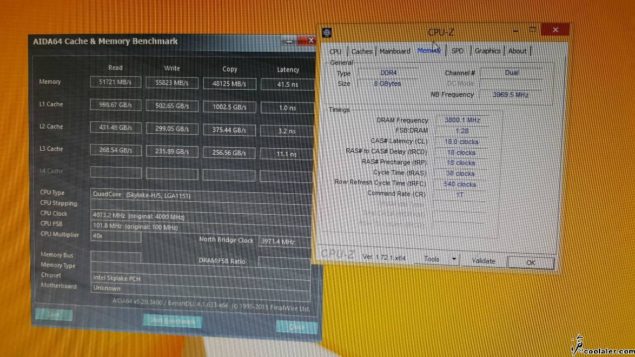