The official Intel Rocket Lake 11th Gen Desktop CPU family slides have leaked out which not only confirm the specifications we reported a while ago but also show the gaming potential of the top Core i9 CPU vs the last-gen flagship. 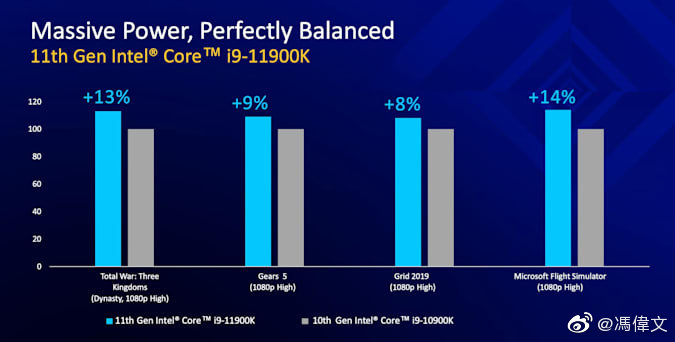 The game titles selected by Intel including Total War: Three Kingdoms, Gears 5, Grid 2019, and Microsoft Flight Simulator 2020. All games were tested at 1080p with the high settings preset. Intel's own benchmarks show that the Core i9-11900K Rocket Lake CPU is up to 14% faster than Core i9-10900K. The average performance gain over the previous generation is around 11% and that's a decent increase over the last generation but at the cost of much higher power draw and power consumption as recently reported in various leaks.

As for the CPU specifications, we posted an exclusive a couple of weeks ago which highlighted the full specs for the Intel Rocket Lake Core i9 and Core i7 processors. The Intel official slide confirms these specifications and you can get more detailed information for each respective 'K' series CPU below.