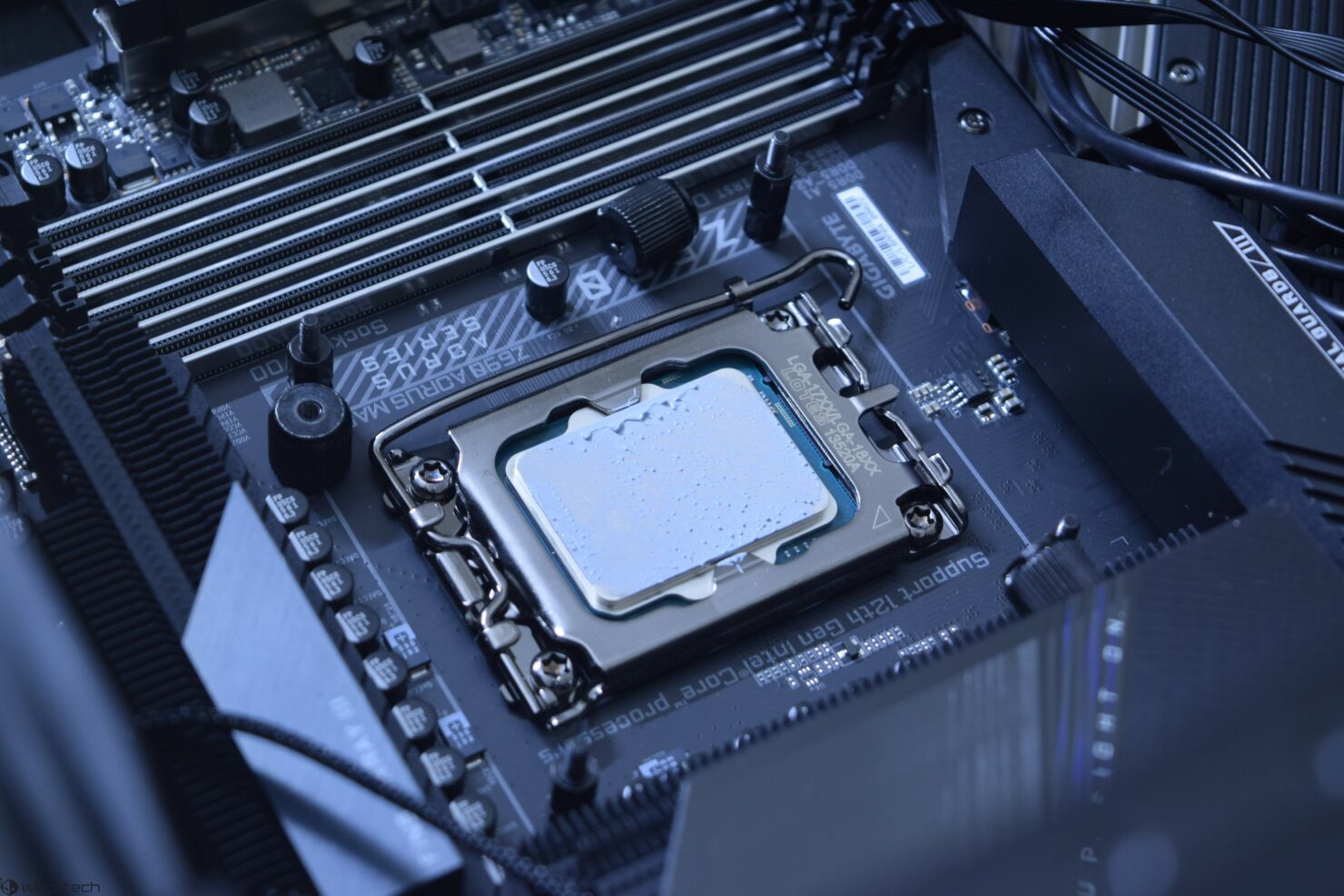 An Intel spokesperson sat down with Tom's Hardware recently to discuss the current warping of their Alder Lake chips. This bending happens when a user attempts to insert the processor into the motherboard socket. When users force the new elongated chips into the current socket set, it can affect increases in the chip's temperature. While this seems like a minor problem, significantly, when the processor's temperature rises about 5° C, this can place a damper on the efficiency of the chip and the overall lifespan of the Intel Alder Lake chips.

In the following video by Jisaku Hibi, you can see this warping in action, as well as the effect this has on the system attempting to maintain proper cooling levels:

PC enthusiasts refer to this situation in a few different ways. Terms such as 'warping,' 'bowing,' and 'bending' describe in the most exact words the immense force put upon the center of the processor causing the integrated heat spreader, or IHS, to bend. Enthusiasts will try to integrate unique solutions to eliminate the issue to the best of their abilities. Some such solutions are custom devices the user constructs, additional washers to force the chip in place, or hacksawing chip sockets from the motherboard to compensate for the loss of insufficient cooling. The latter technique was created by Allen Golibersuch, also known as 'Splave' in the specialty circles, who happens to be a World Record overclocker.

In the interview posted by Tom's Hardware recently, their Intel spokesperson discussed the condition in-depth, the ramifications of altering the chip or socket, and if Intel plans to change the current designs of either the processors or the processors' sockets to halt any future problems entirely.

— commentary from the Intel Spokesperson in Tom's Hardware recent interview

Intel appears to be aware of the issue but states that the "slight deflection is expected" and warns users not to make any modifications. The user will void their warranty in total. Deflection is defined as "the degree to which a part of a structural element is displaced under a load." The terminology is seen in the basis of engineering and is the technical term that enthusiasts mean when they describe the issue as warping, bending, or bowing.

Intel appears to avoid discussing whether a user will hit what has been considered the boost frequencies of their chips. The company does not talk about any clock speed values except for the base frequencies of the Alder Lake chips. Under standard operating procedures, the Intel Core i9-12900K and i9-12900KS processors can reach a maximum of 100° C. However, by altering the chips or socket and raising the temperatures another five degrees, you will lose some performance and the highest workload due to the chip being unable to stress itself any higher. Thus, Intel's Turbo Boost frequencies published are not an official guarantee.

Also, the warning of not altering the processor due to warranty voiding is not abnormal, even if it was a different product and manufacturer. Any manufacturer would state that any unusual or drastic product alterations would void a user's warranty.

We have posted the interview from Tom's Hardware between the online site and an Intel representative. The two discuss the deflection issue of the processor socket and any changes wrought by the nature of the motherboard bending.

Tom's Hardware: Are there any planned changes to the ILM design? This condition might only exist with certain versions of the ILM. Can you confirm that this ILM is to spec?

Intel: "Based on current data, we can’t attribute the IHS deflection variation to any specific vendor or socket mechanism. However, we are investigating any potential issues alongside our partners and customers, and we will provide further guidance on relevant solutions as appropriate."

TH: Some users report reduced thermal transfer from the deflection issue, which makes sense as it clearly impacts the ability of the IHS to mate with the cooler. Would Intel RMA the chip if the mating was poor enough to get thermal throttling?

Intel: "Minor IHS deflection is expected and does not cause the processor to run outside of specifications or prevent the processor from meeting published frequencies under the proper operating conditions. We recommend users who observe any functional issues with their processors to contact Intel Customer Service."

TH: The chip deflection issue also impacts motherboards. As a result of the deflection on the chip, the rear of the socket ends up bending, and thus the motherboard. This raises the possibility of damage to the traces running through the motherboard PCB. Is this condition also within spec?

The denial of Intel stating that the deflection caused by their Alder Lake chipset is not their responsibility can be troublesome for some PC enthusiasts that want the utmost performance from their machine, even to the point of making their alterations. Even with the company is aware of the issue and watching for significant changes, they will not be making any changes to increase the size of the socket or any other technique to alleviate the situation. Also, Intel, not feeling that this process is their problem, will now have to have the motherboard designers and manufacturers look to see if they have a problem with their motherboards or if Intel is really to blame. That sort of negative impact from the market may cause Intel to take responsibility and make changes to either future chip designs, updated socket replacements for manufacturers, or additional adapters to keep deflection from happening.