A new storage technology 1000X faster than NAND flash found in SSDs and has up to 10X the capacity of DRAM will debut later this year. That's the bombshell that Intel and Micron just announced via a joint press conference held earlier today. 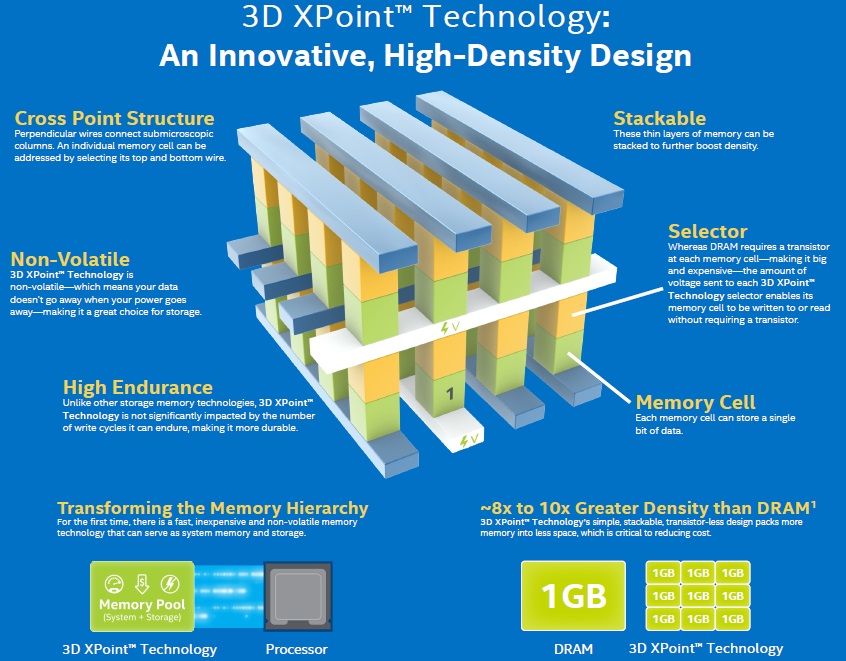 The new memory technology is dubbed 3D XPoint - pronounced 3D Cross Point - and relies on vertically stacking memory chips n top of each other. A concept not unlike what we've seen with HBM - High Bandwidth Memory - that AMD and Hynix co-developed and brought to the market this year with AMD's flagship graphics chip code named Fiji.

However while there are similarities in concept the technologies are very different in terms of their capability and targeted market. While 3D XPoint has up to 10X the capacity of DRAM it isn't actually as fast, which in turn makes it significantly slower than HBM. But unlike DRAM and HBM and very much like NAND flash, 3D XPoint retains all the data after power is switched off. So it's a permanent storage solution like HDDs and SSDs today rather than a temporary storage device like DDR3 and GDDR5 where the data for running applications resides and is fed to the host processor.

We've heard of similarly disruptive technologies in recent years, like Crossbar's resistive memory dubbed ReRAM which the Crossbar's vice president of strategic marketing and business development said Intel and Micron seem to have come up with a technology that's very similar to his company's own ReRAM “It sounds very much like what we have,” he said. We've also heard of the Phase Change storage technology from IBM which promised similarly impressive speeds and capacities.  The real story here however is that unlike those technologies which haven't materialized yet, 3D XPoiint technology based memory solutions should start sampling later this year. Micron even showed off a chip wafer of the new memory tech from its fabrication plant in Idaho, USA.

SANTA CLARA, Calif. & BOISE, Idaho--(BUSINESS WIRE)--Intel Corporation and Micron Technology, Inc. today unveiled 3D XPoint™ technology, a non-volatile memory that has the potential to revolutionize any device, application or service that benefits from fast access to large sets of data. Now in production, 3D XPoint technology is a major breakthrough in memory process technology and the first new memory category since the introduction of NAND flash in 1989.

The explosion of connected devices and digital services is generating massive amounts of new data. To make this data useful, it must be stored and analyzed very quickly, creating challenges for service providers and system builders who must balance cost, power and performance trade-offs when they design memory and storage solutions. 3D XPoint technology combines the performance, density, power, non-volatility and cost advantages of all available memory technologies on the market today. The technology is up to 1,000 times faster and has up to 1,000 times greater endurance3 than NAND, and is 10 times denser than conventional memory.

“For decades, the industry has searched for ways to reduce the lag time between the processor and data to allow much faster analysis,” said Rob Crooke, senior vice president and general manager of Intel’s Non-Volatile Memory Solutions Group. “This new class of non-volatile memory achieves this goal and brings game-changing performance to memory and storage solutions.”

“One of the most significant hurdles in modern computing is the time it takes the processor to reach data on long-term storage,” said Mark Adams, president of Micron. “This new class of non-volatile memory is a revolutionary technology that allows for quick access to enormous data sets and enables entirely new applications.”

As the digital world quickly grows – from 4.4 zettabytes of digital data created in 2013 to an expected 44 zettabytes by 20204 – 3D XPoint technology can turn this immense amount of data into valuable information in nanoseconds. For example, retailers may use 3D XPoint technology to more quickly identify fraud detection patterns in financial transactions; healthcare researchers could process and analyze larger data sets in real time, accelerating complex tasks such as genetic analysis and disease tracking.

The performance benefits of 3D XPoint technology could also enhance the PC experience, allowing consumers to enjoy faster interactive social media and collaboration as well as more immersive gaming experiences. The non-volatile nature of the technology also makes it a great choice for a variety of low-latency storage applications since data is not erased when the device is powered off.

Following more than a decade of research and development, 3D XPoint technology was built from the ground up to address the need for non-volatile, high-performance, high-endurance and high-capacity storage and memory at an affordable cost. It ushers in a new class of non-volatile memory that significantly reduces latencies, allowing much more data to be stored close to the processor and accessed at speeds previously impossible for non-volatile storage.

The innovative, transistor-less cross point architecture creates a three-dimensional checkerboard where memory cells sit at the intersection of word lines and bit lines, allowing the cells to be addressed individually. As a result, data can be written and read in small sizes, leading to faster and more efficient read/write processes.

Intel and Micron announced that 128 gigabit / 16 gigabyte 3D XPoint memory chips will begin sampling later this year. With speeds that are greater than that of NAND flash but are not quite as fast as DRAM makes this sort of memory a new entrant that represents a happy medium between the two.
“This is not a replacement technology,” said Rob Crooke, an Intel senior vice president. “This is an invention that opens up new sorts of applications.” And we agree, suffice to say we can't wait to see what this technology will enable in the not too distant future.