After many hold-ups and delays to Intel's 14nm manufacturing process it seemed that Broadwell was a far off sight. But now news has trickled through VR-zone of Intel preparing a big announcement for CES 2015. With more than a dozen Broadwell-U SKUs  planned for a Q1 2015 launch. This stands as a great sign for recovery to what seemed like a troublesome transition. Intel's cutting edge 14nm manufacturing process is finally baring good fruit.

Broadwell and Skylake Will Coexist in 2015

2015 will be one of the stranger years for Intel's desktop launch schedule. According to VR-Zone Intel plans to release a plethora of  15W Broadwell-U processors for the mobile market in Q1 2015. The desktop refresh however will be a little different.

Intel will update the desktop stack with both Skylake and Broadwell CPUs at the same rate. Although strangely enough the overclocking friendly unlocked SKUs coveted by enthusiasts disappointingly, will only be introduced in a Broadwell flavor.

Broadwell brings many new improvements that range from lower power, improved IPC and significantly better integrated graphics. Although arguably for enthusiast gamers only the IPC improvement is something to look forward to. Overclocking on a completely new perhaps promising but unpredictable 14nm manufacturing process could prove to be a worry. Unfortunately there is no way to find out how well Broadwell-K overclocks until it's in the hands of enthusiasts.
If Skylake-K is pushed back to late 2015 or 2016 this can create a very interesting dynamic. By 2016 AMD will have it's brand new Zen core out. Developed from scratch by the legendary CPU architect Jim Keller who brought us the original Athlon and Athlon64 CPUs that completely out-shined the competition from Intel back in the day. The new core stands to bring back AMD to the high performance arena. Perhaps igniting a healthy competitive atmosphere in the x86 space for a change.

PCWorld even argues that users should perhaps completely skip Broadwell on desktop and wait for the unlocked Skylake parts. After all Skylake represents Intel's Tock in their Tick-Tock philosophy. The tick being the manufacturing shrink and more comprehensive graphics architecture update. While the Tock represents introducing a new CPU microarchitecture. Aside from the potential performance benefits from the updated CPU microarchitecture. Interistingly Skylake processors will support both DDR3 and DDR4 RAM.

If a CPU performance improvement isn't what you're looking for. But an updated feature and functionality set then you're luck. Because Skylakes brings plenty of improvements to the feature set and functionality. You'll have a number of attractive chipset choices for 2015 on the new LGA 1151 socket for Skylake. 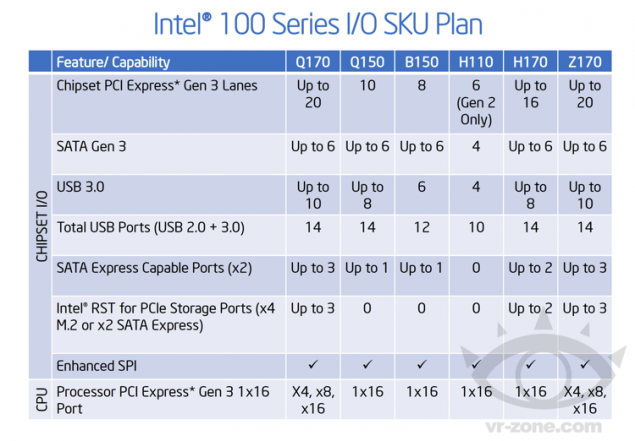 With the new range of 100 series Intel desktop chipsets which will support  Skylake but not Broadwell desktop processors. You're looking at getting more than enough SATA 3 and USB3 to satisfy your storage and connectivity needs. The 9 series chipset for current Haswell offerings and Broadwell-K will remain relevant but if you want the latest it seems you'll have to hop on to Skylake.

The Z170 is the flagship performance chipset which will support overclocking. So it's what should be looking at if you're looking to grab one of the unlocked K-Series Broadwell and possibly even Skylake processors down the road.  The chipset will feature up to 20 PCIe Gen 3 lanes, 6 SATA Gen 3 ports, 10 USB 3.0 ports and a total of 10 USB3 ports, 4 USB2 ports, up to 3 SATA Express capable ports, up to 3 Intel RST capable PCI-e storage ports which may include x2 SATA Express or M.2 SSD port and x4/x8/x16 Gen 3 PCI-E lane configuration.