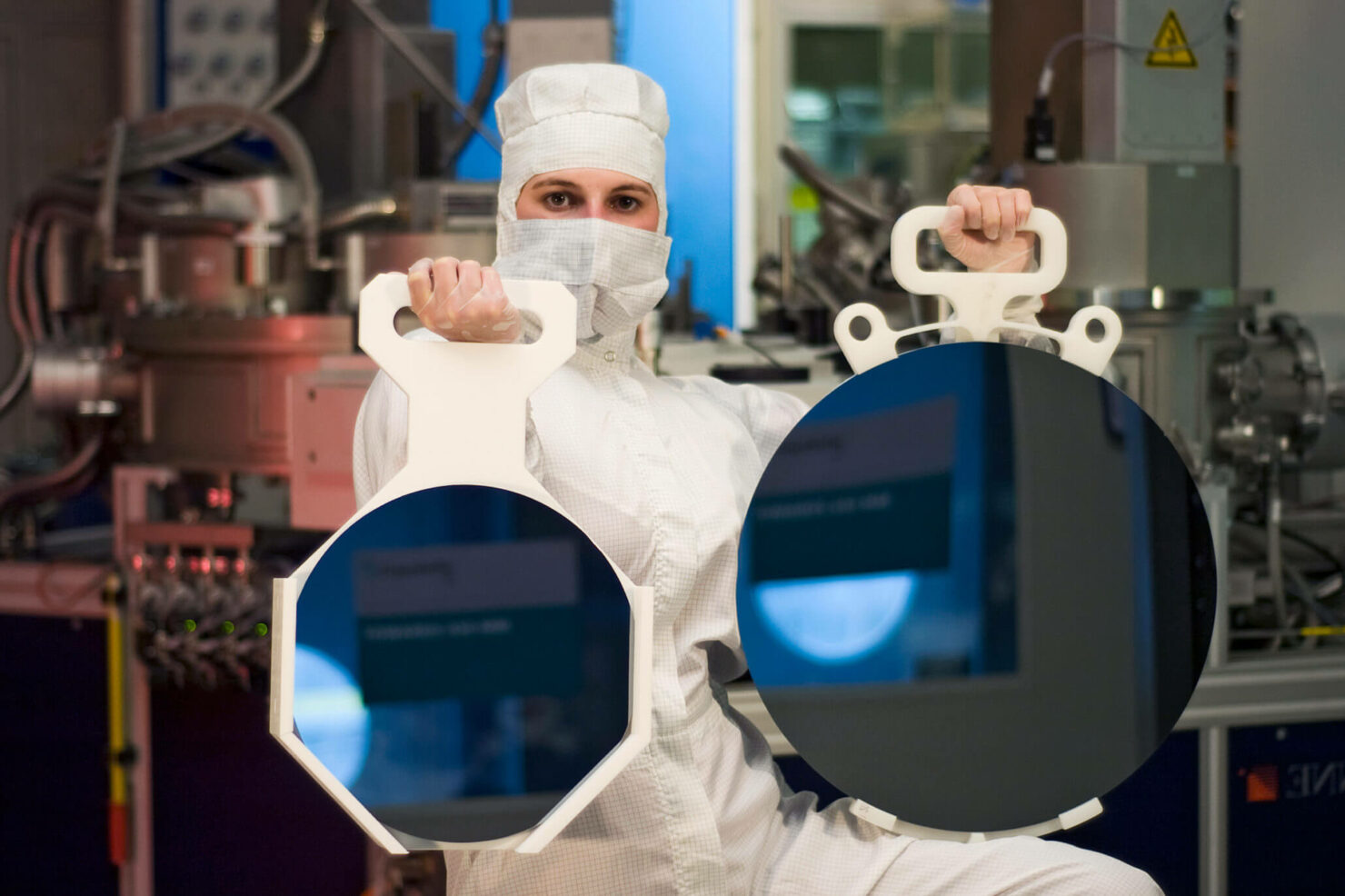 An engineer showcasing a 200mm and 300mm wafer.

Update 12:49 AM GMT+5 11/30/2019. Intel has commented on the story and debunked the rumor from the Korean publication completely. Here is their statement in full:

"The letter from last week says we will increase our use of foundry so we can build more CPUs at Intel. The news reports about our use of third party foundries for CPUs are inaccurate."

Samsung to help Intel meet supply demand for its processors

Just a week ago, Intel sent out an open letter to its partners apologizing for not fixing supply issues and warning about not being able to meet CPU demand in the existing (and coming) quarter. This was followed closely by OEMs such as Dell coming out with drastically reduced forecasts and pinning the blame securely on Intel. The problem is simple, and something I call the "process ramp dilemma". Intel has a finite amount of CAPEX to spend and right now it is lagging behind foundries such as TSMC who have already moved on to the 7nm process (equivalent to Intel's 10nm).

Intel has been struggling to keep up with the booming demand in PC CPUs and has reached out to the world’s two biggest foundries, TSMC of Taiwan and Samsung Electronics, to share some of the load, according to industry sources Thursday.

Intel has outsourced the supply of basic chip components in the past but it’s the first time for the U.S. semiconductor giant to turn to outside companies for its mainstay CPUs, sources said.

Now Intel can either spend its allocated CAPEX on expanding the capacity of its existing 14nm foundries (at the cost of not investing the same amount into 7nm) and concede market share to AMD by way of not being able to match them on a node to node basis or it can spend that CAPEX in accelerating the ramp to 7nm but concede market share to AMD as 14nm demand goes unmet (and is eventually fulfilled by AMD alternatives). As you can see, Intel has managed to get itself into a rare lose-lose situation but tapping third-party foundries is one way to sort of cheat the system.

The report in question here indicates that Samsung Foundries (which is a huge business I might add and more financially in line with Intel's vision) has landed a contract to produce the actual CPU dies that Intel ships as a product. This is something many of us thought would never happen because of the strict standards that Intel requires for production. In fact, I still remember that during the Sandy Bridge era, there was considerable variation in consumer sentiment between CPUs fabbed in Costa Rica and everywhere else.

If Intel has actually tapped Samsung Foundries then a similar problem might arise with even greater rigor. Intel's Copy Exactly SOP was made for its inhouse foundry and even then consumers had suspected variation between two of its foundries while in this case, the foundries would actually be different. Would Samsung fabbed CPUs be less trust worthy than Intel ones? or vice versa? Only time will tell.

To be fair to Intel, I am fairly certain they will do the one thing they can to solve the problem: sharing their process techniques with Samsung to pull this off - including copy exactly - and considering they no longer have a process lead, its not too big of a deal.

What this means for Intel's foundry business

This much is clear though, tapping a third-party foundry would allow Intel to focus on shifting to 7nm EUV as fast as possible (a move to 10nm is still up in the air as of this moment) without spending any CAPEX on existing 14nm facilities. While it will certainly decrease their margins, the one thing Intel has going for it is the thick juicy margins - so it has ample to spare for survival.

This will, however, raise interesting questions about what the future holds for Intel's foundry business. It has already failed the design side once and if Samsung proves to be a valuable partner it could pave the road for an eventual spinoff should Intel want it. Although as we have seen with GloFo, spinoffs of in-house foundries are unusually messy affairs that could end up restricting the company just as much as before.

At any rate, if this report turns out to be true - it will mean that Intel should be able to meet demand by the end of the first quarter of 2020, if not earlier - and that reduces the amount of market share it will concede to AMD - which should be a relief for Intel investors.