Intel Desktop Board Lineup for 2011-12 Revealed 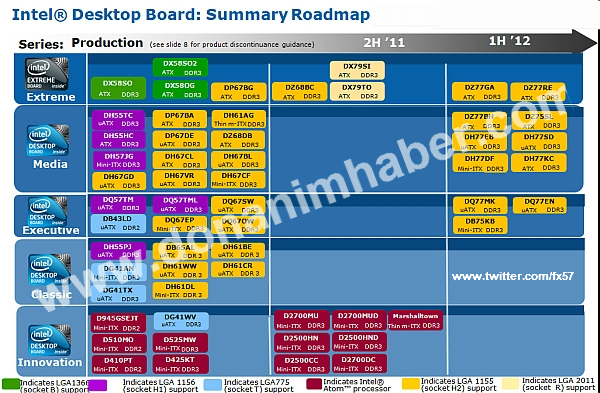 According to a new slide released by the Turkish DonanimHaber website, by the end of 2011, Intel seems to have planned to launch its high end Sandy Bridge-E desktop platform.

Also, with Sandy Bridge-E will come two Extreme Series motherboards on the new upcoming X79 chipset, the DX79SI and the DX79TO.

By the current second half of 2011, Intel is expected to release quite a variety of Intel Atom powered motherboards one of which is codenamed “Marshaltown”.

Continuing on will come the much awaited launch of the next-generation 22nm “Ivy Bridge” processors in the LGA 1155 package in the first half of 2012. The new Ivy Bridge will all be compatible with the current Sandy Bridge supported motherboards after a BIOS upgrade.

To add to the launch would be Intel releasing another chipset referred to as the Z77 Express.L ike the current H6X series, there will be no overclocking features as well as no discrete graphics. On the other hand, Z77 will indeed have support for support for Smart Response technology. There will also be a Q77 chipset but that will add only a few enterprise management features.

Intel's Z77 based motherboards are expected to include two Extreme series models as well (I wonder if that’s of any use considering there’s no overclocking support on them), and two top-end Media Series models.

Also do check out the links below regarding the launch of the upcoming Sandy Bridge-E Processors: