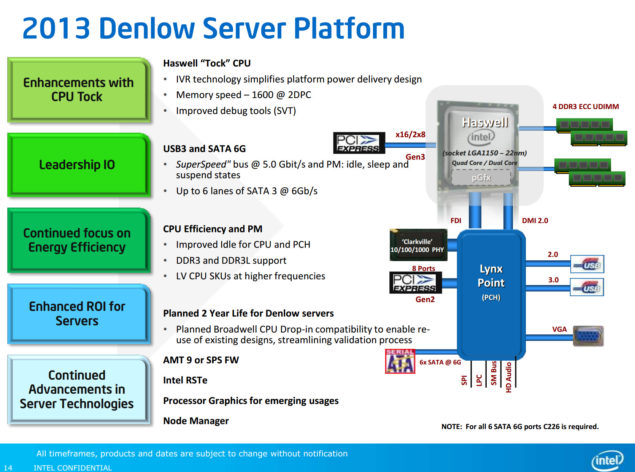 The upcoming Intel Denlow Server platform for workstation and server users which launches in June 2013 has been detailed. From a previous article that was reported a few days ago, it should be noted that the platform would consist 13 Haswell E3-1200 V3 processors which can be seen here.

The Intel Denlow Server platform would make use of the "Haswell" Tock CPU which would deliver Integrated voltage regulation technology for a simplied power delivery system since the VRM modules are located on the chip itself rather than being on the motherboards, this in return means lower costs on the upcoming LGA 1150 motherboards. The Haswell "Denlow" chips would support 1600 MHz Dual channel memory, improved Debug utilities and offer upto 6 lanes of SATA 3 @ 6 GBps, USB 3.0 and a super speed bus rated at 5.0 Gbit/s. Memory could either be DDR3 or DDR3L for power conscious users.

The main focus on Intel Denlow Server platform would be its energy efficient design which may be noted from the Haswell core architecture. The CPU and PCH "Lynx Point" would come with improved idle state configurations while low voltage processors would ship with higher frequencies to deliver better performance in an efficient package.

From the Haswell E3-1200 V3 lineup, it can be seen that Intel is leaving the iGPUs in place for emerging usages and also equipping the Denlow platform with new technologies such as RST e (Enhanced) and Node managing.

Furthermore, the slide confirms that the Intel Denlow Server platform would offer compatibility with Intel's Broadwell range of server CPUs "E3-1200 V4" which would launch next year in 2014. The DATACenter roadmap reveals that for micro-servers, Intel would release the Avoton CPU this year which uses 22nm Silvermont core architecture and upto 8 Core SKUs as detailed here. Then Brickland "Ivy Bridge-EX" to replace the current Boxbro platform and spanning three generations of architectures - Ivy Bridge-EX/ Haswell-EX and Broadwell-EX.