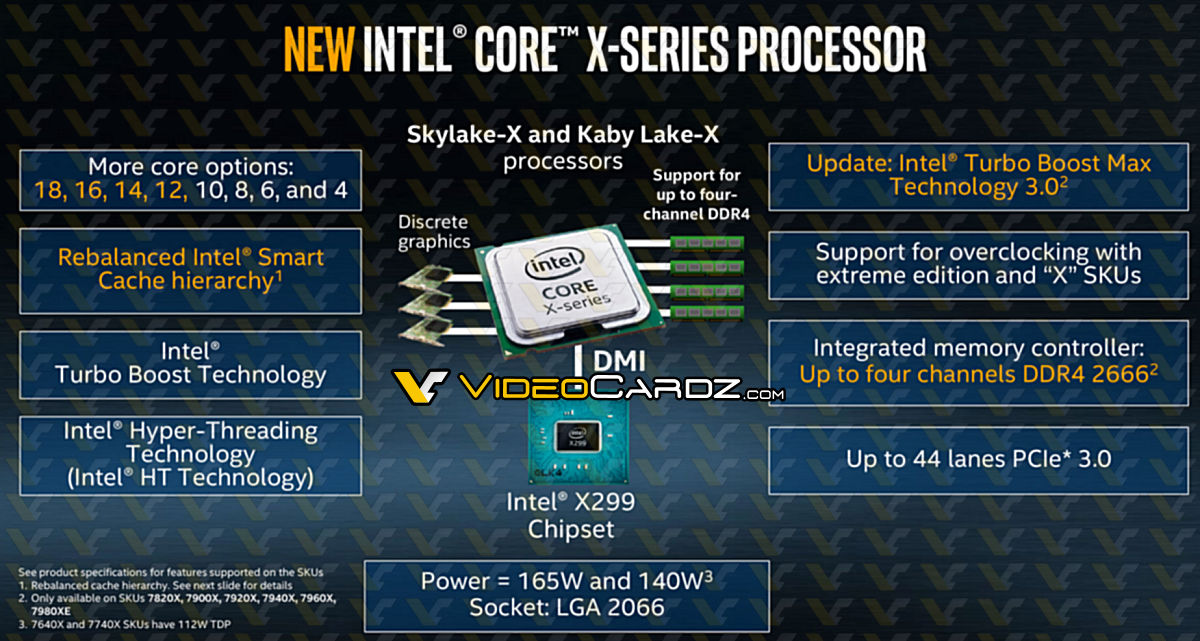 Intel's Core X series processor lineup has just been leaked by Videocardz and shows that the chip giant is preparing their fastest processor to date, the Core i9 7980XE. Featured in the Skylake X CPU family, the new processors rocks the most higher core count ever to be featured on HEDT CPUs.

The Intel X299 HEDT platform was fully detailed by us yesterday but it seems like the CPU lineup is more powerful than we previously thought. The Intel Skylake X CPU family has guns aimed directly at AMD's Ryzen Threadripper series processors which comes on the X399 platform and features up to 16 core processors. What is Intel's response you ask? An 18 core, insanely threaded monster of a chip that will be available to consumers very soon on the LGA 2066 socket.

The latest Intel Core i9, Core i7 and Core i5 "X" Series box packages have leaked out over at Videocardz.

We have a new flagship and it's a monster in raw specifications. The Intel Core i9-7980XE is Intel's fastest and also the worlds fastest chip, featuring 18 cores, 36 threads and lots of cache in the new rebalanced Intel smart cache hierarchy system. We are looking at 24.75 MB of just L3 and 18 MB of L2 cache which totals 42.75 MB, that's impressive.

The TDP we are looking at is also higher at 165W but in return, we will be looking at some really high clock speeds thanks to Turbo Boost Max 3.0 technology. There's full overclocking support, massive 44 PCIe Gen 3.0 lanes and full support for overclocking. This monster is the highest core chip we will be getting this year for any HEDT platform and that will definitely come at a really high price point.

The Intel Core i9-7960X is the direct answer to AMD's 16 core Ryzen threadripper chip. It comes with 16 cores, 32 threads and features 22 MB of L3 cache. This chip will be featuring a TDP of 165W and will be priced over the $1000 range but it will be interesting to see how this chip competes against AMD's highest core count chip, the rumored Ryzen Threadripper 1998X.

Intel will have to compete in terms of both price and performance but looks like their chips will definitely have an edge with new clock boosting technologies on Skylake X.

The Intel Core i9-7940X is a 14 core, 28 thread chip which just blows away anything that we have seen so far. It features even more cores than the Core i9-7920X which we previously thought to be the flagship chip. Intel is definitely going to bring a very heated battle against Ryzen Threadripper CPUs. The chip will feature 19.25 MB of L3 and 14 MB of L2 cache which accumulates to 33.25 MB cache.

The Intel Core i9-7920X is no longer the flagship of the Skylake X range, but it's still a fast chip. This chip is a juggernaut featuring a total of 12 cores and 24 threads. The total cache on this behemoth is 16.5 MB (L3). Skylake X CPUs will feature a LLC (Last Level Cache) of 1.375 MB (L3) per core and MLC (Mid Level Cache) of 1 MB (L2) per core. So the total cache each core will be able to access is 2.375 MB. So theoretically, we are looking at 28.5 MB of total cache available on the chip which is part of Intel's rebalanced cache hierarchy that not only is going to save space, but also deliver faster performance to improve IPC.

The chip will be a replacement for the Core i7-6900K which has been a very popular chip on Intel's current X99 enthusiast platform. The chip will also launch in June and will directly tackle the Ryzen 7 1800X. Although, price wise, it could sell for higher versus 1800X's $499 US market price.

The Intel Core i7 7740X processor will become the fastest Core i7 chip in the Kaby Lake lineup. It will replace the Core i7 7700K with slightly better specs. This chip features a quad core, hyper-threaded design. The chip is based on the latest 14nm+ process node which delivers improved efficiency and performance on the existing 14nm FinFET technology. 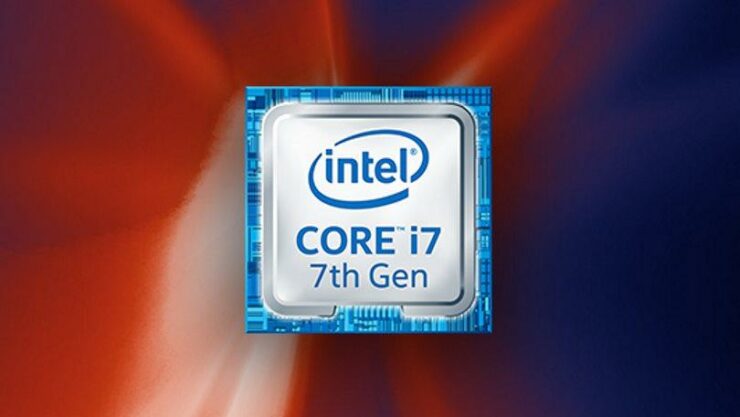 Intel Core i5 7640X Processor Specifications – The Entry Level, Under $300 US HEDT Chip

This chip features a quad core design along with four threads. The chip is based on the latest 14nm+ process node which delivers improved efficiency and performance on the existing 14nm FinFET technology. The clock speeds are rated at 4.0 GHz base, but boost would be beyond 4 GHz. The processor packs 6 MB of L3 cache. The TDP is rated at 112W, just like the Core i7 processor in the Kaby Lake-X family.

Other updates will include support for quad channel memory which will be a good bump over dual channel. The new X299 platform will offer more PCIe lanes from the CPU and PCH. Both quad cores will be pitted against entry level 6 core Ryzen chips as current Intel quad cores provide good overall productivity and gaming performance against the competition.