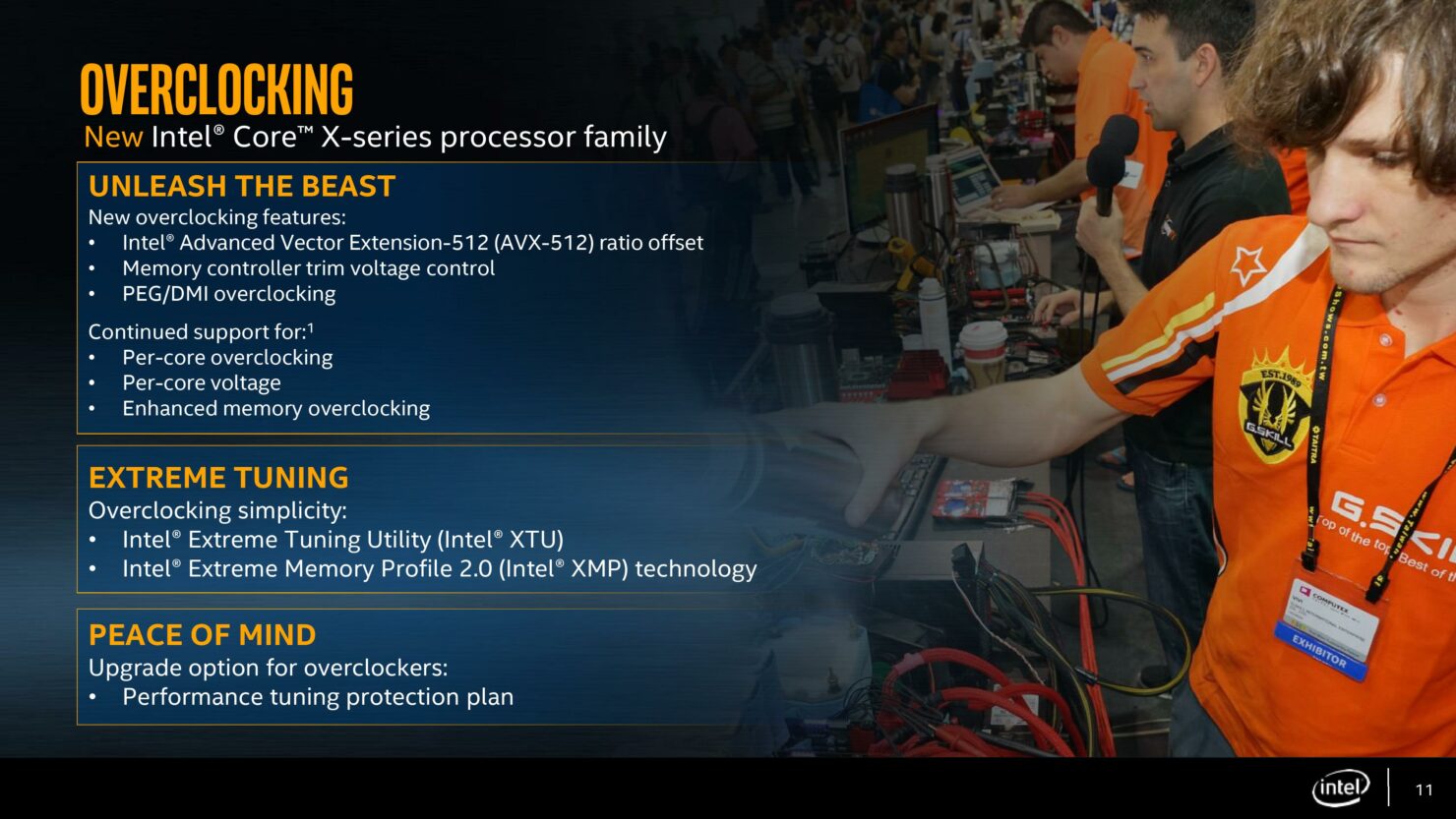 Intel's Core-X series have been announced and overclockers are already testing them in various benchmarks. We have seen the Core i7-7740X and Core i9-7900X achieve some really impressive numbers but here we have a direct comparison of Intel's previous flagship against the upcoming Core i9-7900X 10 core processor.

The Intel Core X series is jam packed with various processors featuring different core counts. The lineup scales all the way from 4 cores and up to 18 cores on the flagship Core i9-7980XE (Extreme Edition) processor. The comparison video was shown by a Chinese overclocker who tested Intel's Core i9-7900X chip against the Core i7-6950X. What's interesting here is that both chips rock a total of 10 cores and 20 threads. 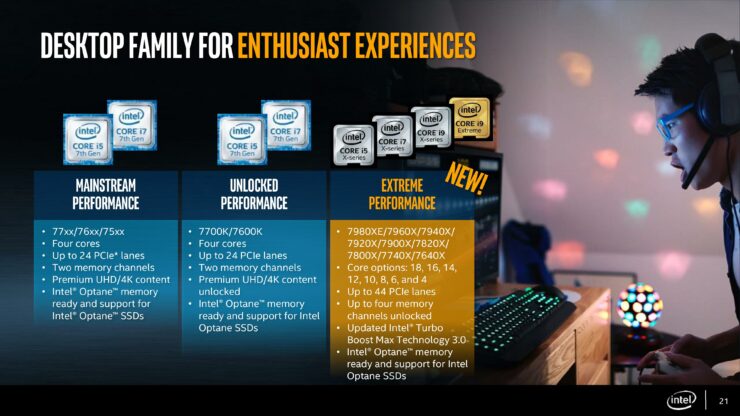 The Intel Core i9-7900X will be priced at $999 US which may sound expensive but Intel was selling their Core i7-6950X for over $1500 US, a year ago. The Core i7-6950X may pack the same amount of cores and threads but featured lower clock speeds, a previous gen architecture that utilized the 14nm process node without the same refinements that we will see on Skylake X CPUs. The chip was clocked at 3.0 GHz base (3.3 GHz on i9), 3.5 GHz boost (4.3 GHz on i9) and 4.0 GHz Boost 3.0 clock (4.5 GHz on i9). We can also expect the improvement in performance coming from clock speed enhancements but there's also a rebalanced cache structure and slight architectural updates.

Both chips were compared at stock clocks and the results are really interesting. The Intel Core i9-7900X scored 527 points in the Single Thread test compared to 430 which the Core i7-6950X scores. In the Multi-threaded test, the Core i9-7900X scored 5198 points in comparison to 5030 points on the i7-6950X. This may not be seen as a huge improvement but given the huge cut in price (up to $700 US) and delivering faster performance than the previous generation flagship, the chip does look really nice. 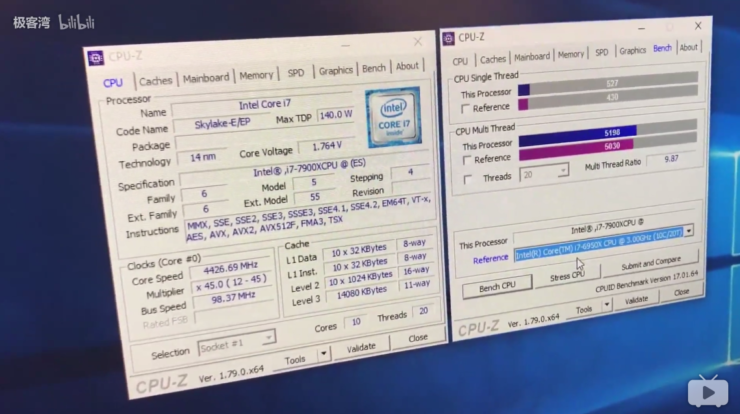 For those questioning why the voltage is so high at 1.764V, CPU-Z encountered a bug as it isn't a final build for Intel Core-X series support. The video of the benchmark session can be seen below. It can be seen that all settings are set to 'AUTO' in the BIOS so no manual configuration was done.

Intel's entry level Skylake X chip has also been tested by renowned overclocker "SHIMIZU" who achieved an overclocking feat at the HWBot event. The overclocker managed to push the Core i7-7800X, a 6 core processor to 5755 MHz and scored 1918 Cinebench points which makes it the top score achieved by a hexa core CPU. More details can be seen in the screenshot below: 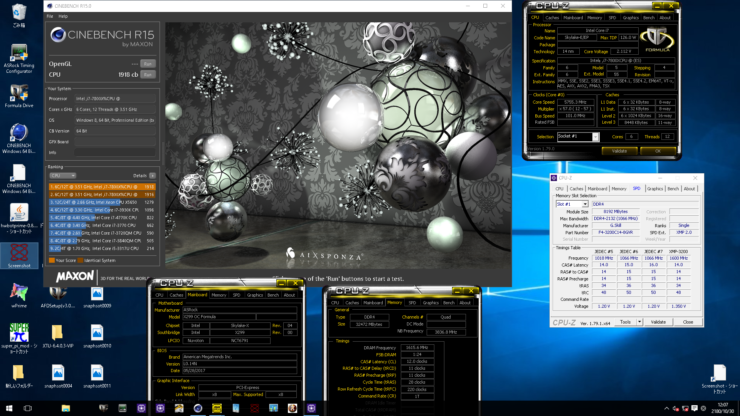 Lastly, we have the most affordable Skylake X option. Do note that I say Skylake X and not the entire X299 family as there are also Kaby Lake X chips coming to the X299 platform. The Core i9-7800X is going to feature 6 cores, 12 threads and will carry a total of 8.25 MB of L3 cache. Clock speeds for this chip will be maintained at 3.5 GHz base and 4.0 GHz with Turbo Boost 2.0. 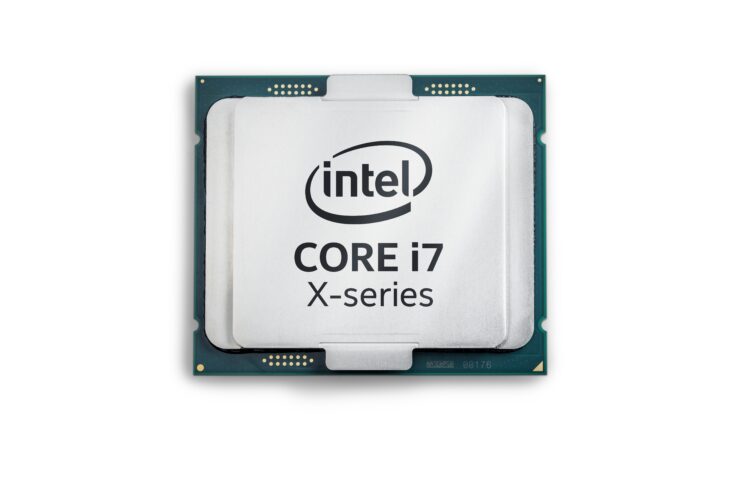 There’s no Turbo Boost 3.0 on this chip but Skylake X has one significant advantage on all chips. The L2 cache has been increased from 256 KB per core to 1 MB per core and that will lead to improvements in overall system performance. The chip will feature a TDP of 140W and will be available in June. The Intel Core i7-7800X wil retail for a price of just $389 US, offering users a foot step into the wider high-end desktop space. For our full Intel Core X series coverage, visit the link here.