The first overclocking benchmarks of the Intel Core i9-12900K Alder Lake CPU have leaked out and it handily beats AMD's Ryzen 9 5950X while consuming an insane amount of power.

The Intel Core i9-12900K will be one of three unlocked chips that the blue team will introduce in November on the Z690 platform. It will be the fastest in the lineup and pitted directly against the AMD Ryzen 9 5950X. We have seen several benchmarks of the chip leak out previously but Bilibili content maker, Enthusiast Citizen, has leaked out the first overclocked results and they are both impressive and shocking. 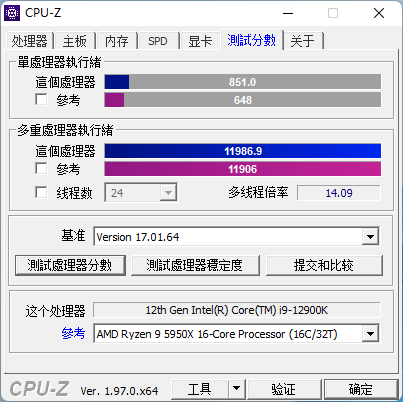 The CPU was overclocked to 5.2 GHz across all 8 performance cores. Looking at the benchmarks reported within the CPU-z benchmark, the single-core score saw a 3% increase while the multi-threaded score saw a 5% increase over the stock configuration that leaked out earlier. Versus the AMD Ryzen 9 5950X, the overclocked Intel Core i9-12900K scored a 32% lead in single-core and a 2% lead in the multi-core test. The Ryzen 9 5950X offers 33% higher threads than the Alder Lake chip but the main thing to note is the power consumption.

The Intel Core i9-12900K CPU consumed an insane 330W of power at full load while running at 5.2 GHz (1.385V). The small cores were not touched so pushing them too might result in even higher power consumption though not as significant as the P-Cores. That's more than twice the power consumption over the rated PL1 TDP of 125W for the chip and will require an insane amount of cooling to tame this chip if you plan on overclocking it.