A new set of benchmarks for Intel's upcoming Core i7-8700K flagship Coffee Lake CPU have leaked out. The latest benchmarks evaluate the CPU in various single and multi-threaded tasks. There are also some new details regarding overclocking which shows that the chip can support more than a 5 GHz clock speed.

The Intel Core i7-8700K is the flagship processor of the Coffee Lake desktop family which launches early next month. The processor will be the first mainstream product from Intel to boast 6 cores in a single package. Although Intel hasn't made any significant architectural changes in Coffee Lake, the updated process design will deliver increased performance output and efficiency through clock rate and core count bump. Following are the specifications for the Intel Core i7-8700K CPU. 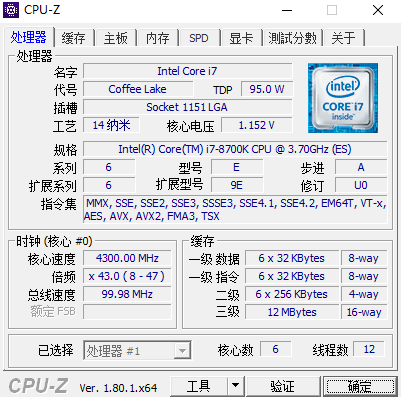 We also have some 3DMark scores for comparison. In Time Spy, the chip reports a CPU score of 7686 points, while Fire Strike tests report a physics score averaging around 19250 points. There's also AIDA64 memory benchmark test which can be seen below. 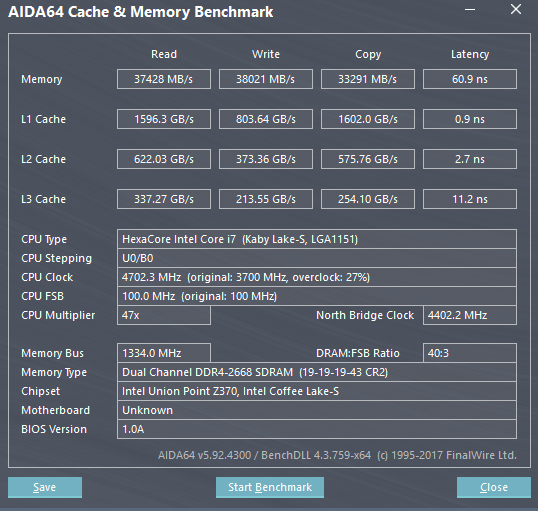 One thing to note is that all of the testing was done at stock clocks of the chip. It was tested on a MSI Z370 KRAIT Gaming motherboard which was detailed in this post. The platform featured 16 GBs of DD4 memory clocked at the native speeds of 2666 MHz.

Now when it comes to overclocking, there are kind of mixed reports. One Chinese source has said that 5.3 GHz on the Core i7-8700K and 5.0 GHz on the Core i3-8350K are possible with simple core tuning but you would require a good AIO cooler or high-end air coolers to keep these chips cooler under load.

Expreview points out that the chips will have really low voltage which means that overclockability will be generally higher but as soon as the chips start going beyond 5.0 GHz, there's an overheating issue. The reason cited is use of TIM (Thermal Interface Material) instead of solder. Now Intel has been using TIM on their chips for several generations but it remains to be seen just how far these chips can be pushed on standard air and liquid coolers at full load before heat becomes an issue. Expect more details on the Coffee Lake chips in the coming weeks.