Intel is planning its Tiger Lake U refresh soon and the first benchmarks for the platform have already leaked out. I was doing my usual rounds and stumbled across this. Refreshes usually offer under 5% performance uplift but if these are indicative of the actual results (and there is no reason they aren't) then we are looking at a 10% performance and responsiveness uplift on an aggregate basis - which is pretty impressive for a refresh. As always, when dealing with a single data point (which this is), wait for more benchmarks and of course, third-party testing.

With that out of the way, let's dive right in. The benchmark suite in question is CrossMark (from the makers of SysMark). According to BAPCO:

While we would have preferred a Cinebench result (which remains the bread and butter of CPU benchmarks), this does nicely as well and comes from a trusted vendor of benchmarks (SysMark). That said keep in mind that this benchmark appears to measure *both* performance and responsiveness in a laptop compared to *only* performance.

The Intel Core i7 1195G7 scores 1519, 1614, and 1358 in the Productivity, Creativity and Responsiveness categories respectively for an Overall score of 1534. Benchmarks are of course, useless without some context so we looked up the median values of other mobility processors in this TDP envelope and compared the results.

Here we see that the 1195G7 effortlessly beats its predecessor as well as the Apple M1 and Ryzen 7 5800U - the two SoCs that are its closest competition in this TDP envelope. The 1185G7 could already beat the Apple M1 in single-threaded performance in Cinebench R15 but was only able to trade blows (winning some/losing some) in multi-threaded performance due to its limited core count (4 vs 4+4). If these benchmarks are any indication, Intel has fixed that problem. It would be very interesting to run Cinebench on the 1195G7 and compare how performance increases over the 1165G7 and based on these benches I would estimate that number to be between 5% and 10%. 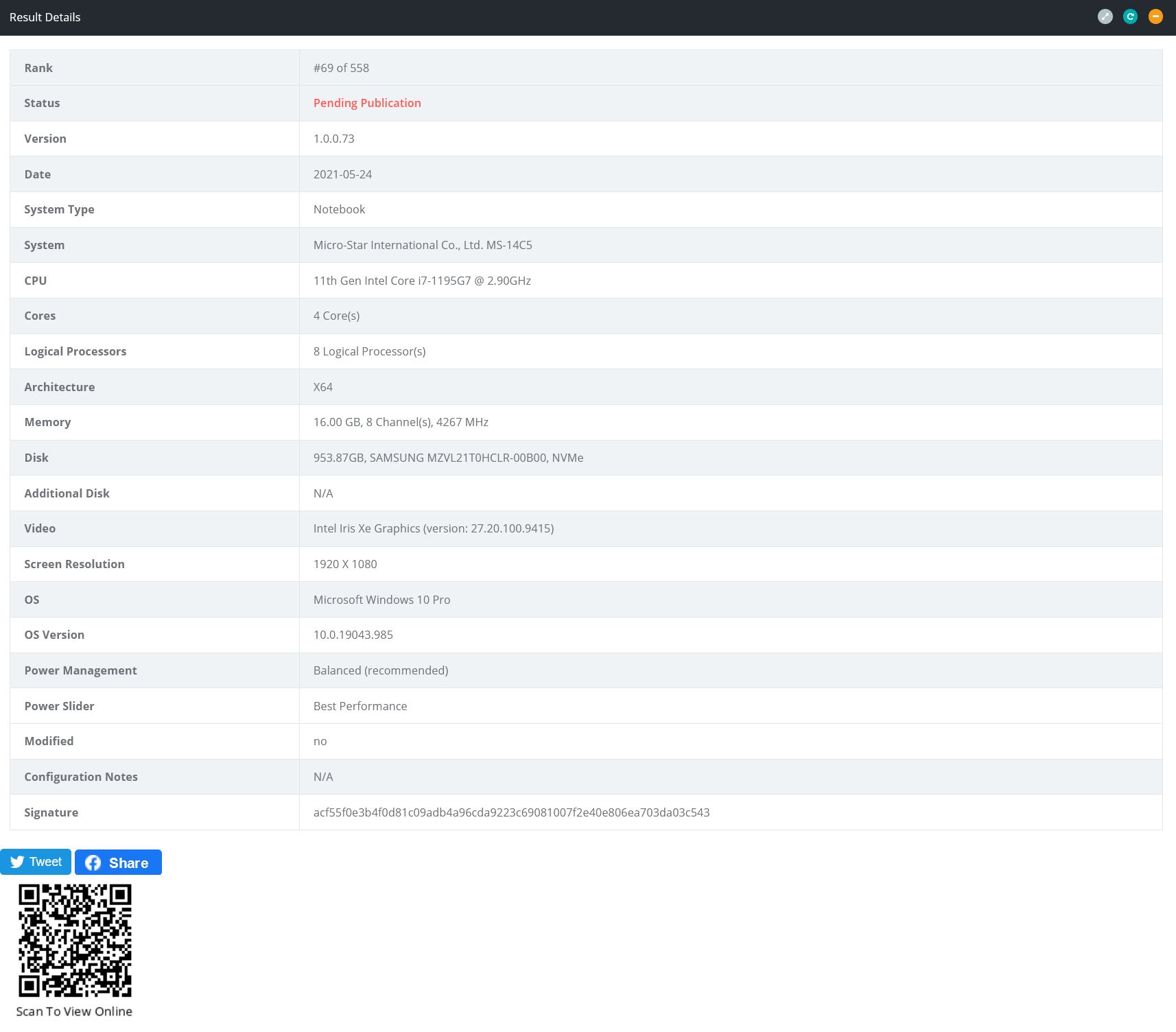 Oh, and in case you are wondering, it was MSI that leaked the benchmarks while testing. The laptop in question is the "MSI 14C5" which appears to be the MSI Leapord 14-inch ultra-light notebook. The CrossMark database also has a lot of other notebooks benchmarked and we are posting them below for reference:

The company also recently unveiled its higher-powered TigerLake-H series with 8 cores and based on the leaks an announcement for TigerLake-U refresh is imminent. Computex 2021 seems like the perfect place to announce such a thing and this is something corroborated by past leaks. AMD's Zen 3 processors have clawed a lot of market share from Intel's mobility segment in the last of the 14nm era but it looks like the new 10nm SuperFinEnhanced process would be able to defend Intel's turf without much difficulty.

With NVIDIA getting ready to announce its next generation of RTX 3000 series, Computex 2021 is shaping up to be a very exciting event, so stay tuned for the latest and greatest.